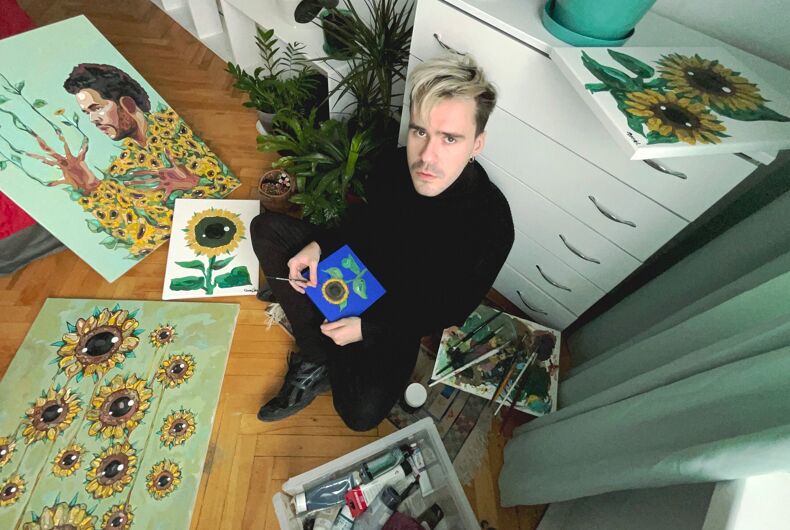 Catastrophe affects the human psyche in a multitude of different ways, affecting both community and individual alike.

For many, the trauma of the Covid-19 pandemic unfurled a collective PTSD across the globe. For a generation of gay men, the AIDS epidemic caused wounds that would never heal. For Ukraine, an eight-year war has redefined what the nation’s future roadmap looks like.

Related: Tom Hanks explains why he wouldn’t play the gay role he played in “Philadelphia” today

Oftentimes though, in those darkest moments, extraordinary talent emerges – rising to take a place on the stage of heroes.

At 23 years old and gay, Daniel Skripnik has now taken his place on that stage.

Living in a nation where official statistics point toward 100 deaths per day, many among people his age, among those defending his nation from Russian invaders, a medical condition precluded Skripnik from serving alongside them.

However, instead of using this ailment to try and receive a waiver to go abroad, the artist stayed, resolved to make a difference for Ukraine on the canvas, as opposed to on the battlefield.

Originally from Luhansk, a region in eastern Ukraine under both majority Russian occupation and near-constant bombardment since 2014, Skripnik moved to Kyiv in the summer of 2021 and was in the capital as the full-scale invasion of his country began just 6 months later.

Tracing his first artistic steps to around, “five years old,” Skripnik’s journey has seen him embrace multiple mediums and look to an iconic queer creator as his inspiration.

“I love to mix everything, acrylics, oil, digital, and hand drawing. Love it,” he told LGBTQ Nation, adding that he’s, “trying to go back to my roots – oil canvas paintings. It sounds basic but Warhol is my inspiration. I love how he used his creativity in different ways. By mixing everything as well, he was able to create a whole universe based on his desire and wishes.”

Skripnik, though, gave a nod to the past and his love of oil paintings in declaring William Adophe Bouguereau’s “Dante and Virgil” as his favorite individual piece.

With over 20,000 followers on Instagram and profiles in CBS News and Forbes, Skripnik has been able to showcase his work to a larger audience than he ever foresaw to raise money for Ukrainian soldiers, while at the same time becoming an inspiration to other Ukrainian artists.

“I want those who doubt their abilities to stop doing it. It seems to me that we can create a unique and high-class style of art while making people understand that it comes from Ukraine.”

As for what his own art represents, Skripnik drilled it down to three words, the same terms he says applies to Ukraine’s future, “Peace, freedom, and independence.”

When asked what those outside the conflict zone needed to know about war, Skripnik reflected on what values he was able to glean from the devastating act of Russian aggression.

“This is a terrible and unpredictable event. A period of time when you need to be stronger than ever. War makes it clear that there is nothing more important than truth and love. Love for family and love for friends.”

While much of the world’s media only began paying attention to the conflict again in February, the almost decade of war across his homeland shadowed Skripnik and coincided with the artists’ coming out.

At 18, he began broaching his sexuality with close friends, and the slow trickle of conversations led to him living a fully authentic life. His original fears of being a gay male in Ukraine eventually evaporated as he grew ever more confident in who he was.

Skripnik described his personal growth this way, “Being gay was difficult when I couldn’t decide for myself whether I could defend myself or not. It was very difficult until I had confidence in myself.”

He ended his thoughts with the simple declaration, “Everything is different now.”

Single, and focused solely on his nation’s war efforts and personal artistic growth, both Skripnik’s humility and circumspect nature were on display, when asked about his own favorite work.

“There is no such art yet, if there was it would mean the end of my development.”

The gay artist, who has seen more than a third of his life consumed by war and grew into manhood against the specter of death and torture at the hands of Russians, offered a message to LGBTQ Nation steeped in hope.

“Be fearless and be yourself. Never give up, and follow your dreams. When you believe in something and then it happens, that’s when you find real pleasure and happiness.”