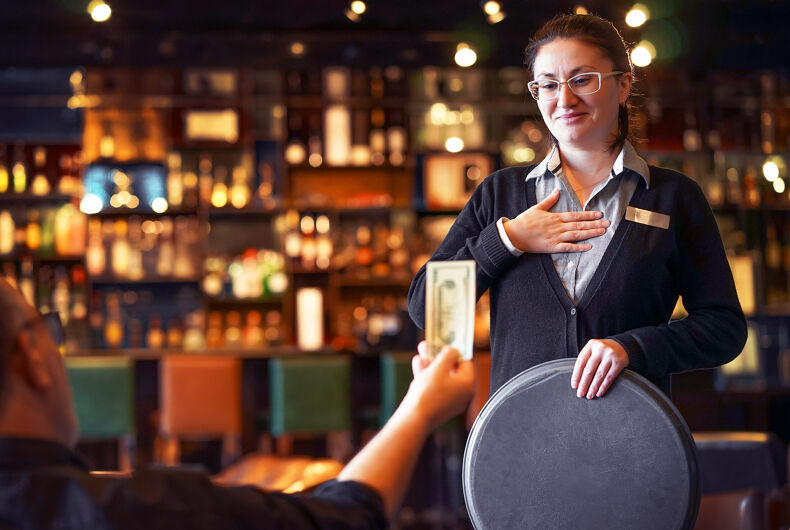 Look, whenever I’m in America, I always tip. But I now spend most of my time outside of the U.S., and the rest of the world has an entirely different relationship with gratuities. And I’ve come to see their method is vastly superior to the American way. Here’s why.

Related: What does it mean to be transmasculine?

Tipping is inefficient — and discriminatory

I’ve heard all the arguments in favor of tipping in restaurants: waitstaff are underpaid, it’s a really hard job, yadda, yadda, yadda. But this all completely misses the point.

I concede it’s a hard job. But there are lots of hard jobs in restaurant work: hostess, dishwasher, janitor, the people who deliver groceries.

Why has America made the wages of one specific restaurant job dependent upon the whims of customers?

In fact, the practice dates from the post-Civil War era, when white business owners borrowed the European idea of noblesse oblige in order to pay Blacks lower wages — and to reinforce the idea that certain segments of society should be subservient to other wealthier folks (and wages should be directly tied to that subservience).

With social reforms and a growing sense of egalitarianism, noblesse oblige died out in Europe — but America chose to keep it alive.

Gratuities are also a percentage of the total bill, so waitstaff in expensive restaurants can make triple (or more) the amount of money a waitperson in a cheap diner for what is essentially the same job. Even waitstaff in the same restaurant can receive wildly different amounts for the same work if, say, one table orders a $400 bottle of wine.

Sure, maybe it all averages out in the end. But if that’s the case, why have tipping at all? Why not just pay waitstaff a stable, consistent wage like everyone else and be done with it?

What is the tip for, anyway? Even after all these years, America still hasn’t figured it out. It’s ostensibly a reward for good service, but woe be it to the person who doesn’t tip — or who tips less than 15 percent, even for bad service.

Many of our friends are now non-American, and since things are so different in their home countries, when they visit the States, they sometimes forget to tip — or they tip low if they deem the service poor.

And they tell stories of being berated and shamed by indignant servers — in one case, even being followed outside the restaurant and chased down the sidewalk by an outraged waitress.

Meanwhile, every server has a story to tell of being completely stiffed even for service that was above and beyond.

Also, who is being tipped exactly? Yes, some restaurants pool their tips, requiring servers to share the money with busboys, sous chefs, and other service staff. But often this is only for credit card tips, not cash ones, which are not shared. Either way, this is never disclosed to the customer.

Tipping is awkward and humiliating, and encourages silly, pointless behavior, not good service

Why does the waitstaff tell you their name or crouch down to your level to take your order? Or write a hand-written “thank you!” on your bill? Or deliver a piece of candy with your check (and maybe sneak you the second piece of candy as an apparent freebie)?

Because studies show all these things increase tips.

One thing that barely increases the size of a tip? Actual good service. Studies also show the service itself makes almost no impact on the amount of the tip.

Basically, tipping is a reward for the server who can successfully put on a show and make a personal impression on the diners. The waitstaff is also rewarded for upselling, because, of course, in America, the server gets a percentage of every food or drink item sold.

This seems to me to not only be humiliating for the server, but also directly antithetical to what good restaurant dining should be all about: namely, sharing an intimate experience with friends or family.

Incidentally, who tips the best? On average, it’s rich white men, which means (a) even in 2022, white men perceived to be rich are still most likely to get the best service, and (b) the pathetic tradition of openly pandering to the wealthy is alive and well in America.

America is in the midst of Toxic Tip Creep

Remember when the expected tip in restaurants was 15 percent? I barely do too. By the time Michael and I left America to become nomads at the end of 2017, diners in Seattle were already expected to tip at least 20 percent — and pressure was building for a standard 25 percent tip.

Then there’s the relatively new expectation of tipping for takeout. And at coffee and juice bars. And basically anything food-related in any way.

Hold on. Isn’t tipping at least tangentially related to “service”? Now we’re supposed to tip someone for just ringing us up at the cash register?

Some restaurants have always played fast with tips, discreetly adding a “service charge” to your bill, but also leaving a spot on the credit card slip to leave an additional tip, hoping the customer won’t realize they’re tipping twice.

But the introduction of computer touch screens has allowed businesses to pressure customers to tip even where tipping didn’t use to be expected and set minimums of 20% or 25% — and having a maximum tip of 50%. To “only” pick 15% — or, God forbid, not tip at all — you must also punch away to a different screen.

Even a minimum suggested amount of 15% pressures customers to pick a higher amount, since, again, no one wants to be perceived as cheap.

All this Toxic Tip Creep has finally reached a point where it’s really pissing people off.

Yes, waitstaff deserves to be paid a living wage. Obviously. But it’s the business’s responsibility to make that happen. Again, for this one job, why pin it on the customer?

America has created a tipping culture that encourages and rewards almost everything I hate about humanity: boastfulness and obsequiousness, intimidation and shaming, and outdated and immoral social hierarchies.

They’ve also created confusion, awkwardness, and resentment in a situation — dining out — that’s supposed to be comfortable and relaxing.

What do I think about those few restaurants who are now trumpeting what they call a “no tipping” policy — and then charging a mandatory “service fee” of twenty or twenty-five percent?

In a way, this feels like the worst of all worlds: locking in an inflated rate of tipping, even for takeout (!), and giving the consumer absolutely nothing in return, not even the option of rewarding for good service. I’m not surprised these efforts have mostly been complete flops.

This brings me to the actual solution.

Do what almost the entire rest of the world does and pay waitstaff a living wage — and then reflect those costs in the prices on the menu!

Some countries, like Mexico, do have a tipping culture that vaguely resembles America — though the expected tip is generally 10% to 15%, and any taxes are included in the prices themselves.

But in most countries, especially in Europe, tipping really is unexpected: it’s simply a reward for good service. If paying in cash, many customers will simply round up in a “keep the change” kind of way.

In most of the world, prices on the menu also include the sales or VAT taxes, which means your total final bill is simply the sum total of those prices.

Service is generally fine, and there’s almost no fawning, shaming, boasting, or obsequiousness. There’s zero pressure to order expensive items you don’t really want. The whole interaction is more genuine and honest, so there’s much more of a feeling of equality between you and your waitperson. Your waiter is a fellow human being, not a trained seal performing for fish.

I’m not convinced America will ever change its irrational, retrograde tipping practices. Whether it’s health care, car culture, gun control, or out-of-control consumerism, America now seems too gridlocked and too self-centered to ever take meaningful action on its many social pathologies.

But they should. Because I’ve seen a much better way, and it’s absolutely glorious.

Here are 5 shoes to celebrate Pride Month with in style