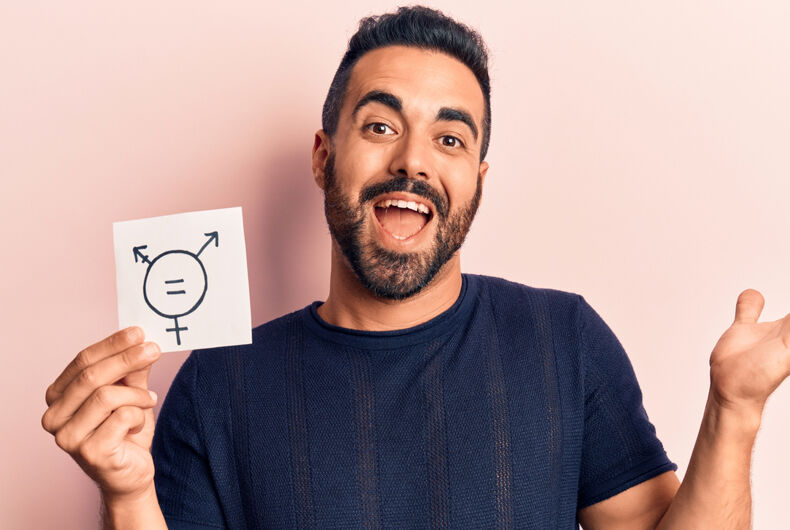 If you follow artists like Chella Man, Kai-Isaiah Jamal, and Krow, then chances are you’ve heard about the term “transmasculine” before. But what does it really mean? And what makes being transmasculine different from identifying as a trans man?

Related: The pressure to be thin as a non-binary person

What Does It Mean To Be Transmasculine?

According to the Merriam-Webster dictionary, the “transmasculine” meaning can be summed up as follows: “A person whose gender identity is partially or fully masculine and differs from the sex the person had or was identified as having at birth”.

The term can be used as both a noun or an adjective to describe someone who identifies as “trans masculine”. Transmasculine people can include trans men, non-binary people, bi- or pangender people, and genderfluid people who identify with the masculine identity. The term is often given to people who were assigned female at birth but whose gender identity and/or expression lean more towards masculine.

What Is The Difference Between A Trans Man And A Trans Masc Person?

The term transgender is often used to describe someone whose gender identity does not match their sex assigned at birth. A transmasculine person may feel the same way but may not desire to transition to a binary male identity.

Transmasculine people may still embrace some parts of them that are feminine or feel inclined to express themselves in feminine ways, such as wearing dresses, putting on makeup, doing their nails, etc.

How Can You Tell You Might Be Trans Masc?

There is no one way to be trans masc, meaning that you can identify as gay, straight, or lesbian and still identify as a transmasculine as well. Remember, sexual orientation and gender identity are independent of one another, so identifying as transmasculine should have no impact on who you’re attracted to.

When it comes to gender identity and expression, transmasculine people share some similar traits, such as an inclination towards presenting and behaving in a more masculine way without the need to fully identify as a man.

There are also feminine cis men, so it’s valid for someone to be trans masc and still be in touch with their feminine side. Just take a look at Chella Man’s Instagram feed to see how they embrace their femininity when they model skirts and dresses.

Finally, gender dysphoria, or the feeling of distress and discomfort associated with your relationship with your sex assigned at birth, is a common feeling that trans, trans masculine/feminine, and even nonbinary people share.

It should be noted, however, that not all trans and gender non-conforming people experience gender dysphoria. At the same time, trans men and transmasculine people may experience gender euphoria once they can express themselves as masculinely as they desire.

Transmasculine people, like trans men, or typically AFAB people who feel more connected to their masculinity than their femininity. And while both trans men and transmasculine people may choose to undergo gender-affirming surgery, HRT, and social transitioning, transmasculine people tend not to see their gender as simply a matter of being male or female. For trans masc folks, gender is still a spectrum – they just happen to lean more on the masculine side of things.

Elon Musk whines about corporations who celebrate Pride. Tesla does it too.