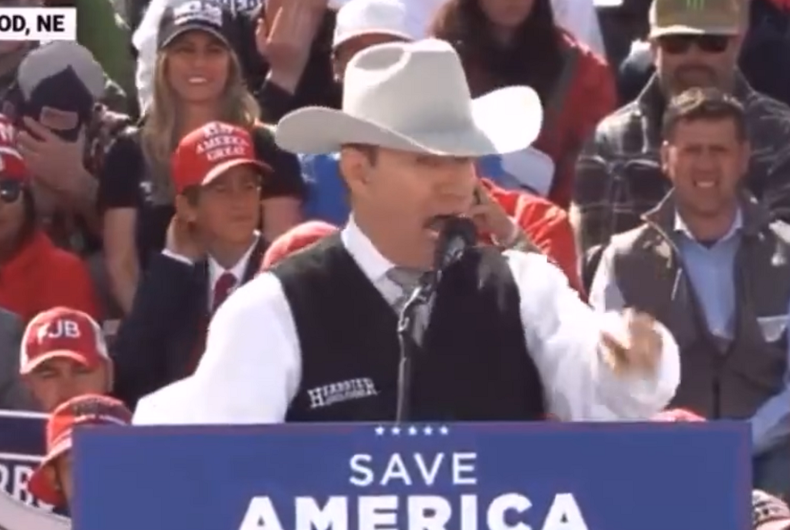 Charles Herbster, a candidate for Nebraska governor, is drawing attention for his appearance at a Trump rally this weekend where he told the crowd that he was going to end sex education in schools and put it “back in the homes,” after eight women have come forward accusing him of sexually assaulting them.

So another speaker at the Trump rally called for “Jesus” to “cast out” the women accusing Herbster of sexual assault.

Related: Conservatives want to disband the Nebraska Board of Education to stop LGBTQ education

“We’re gonna take sex education out of the schools and put it back in the homes where it belongs!” Herbster shouted into a mic at a Trump rally in Nebraska this weekend in a clip that has gone viral.

Herbster: We’re going to take sex education out of the schools and put it back in the homes where it belongs! pic.twitter.com/ZQ4SAE6NeF

Over the last two years, Republicans have made education about sexuality, gender, and racism lightning rod issues, accusing schools of “grooming” children so that they become LGBTQ, calling library books  “pornographic” if they involve LGBTQ people, and saying that learning about the history of racism in the U.S. makes white children feel bad about themselves.

Supporters of age appropriate sex education in lower grade levels argue that kids need to know the basics about body parts and good touch and bad touch so that they can speak out if abused.

Eight women have come forward to say that Herbster touched them inappropriately over the last several years. For example, state Sen. Julie Slama (R) said that in 2019 Herbster reached up her skirt without her consent and touched her at a crowded ballroom at a local Republican event.

Her story was confirmed by a witness, and three witnesses said they saw Herbster grabbing the buttocks of another woman at the event.

Six women told the Nebraska Examiner last month that Herbster touched them inappropriately – like grabbing their buttocks – at events, often when they were getting their pictures taken with him. Some of the grabbing events allegedly occurred at beauty pageants that Herbster judged.

Another woman said that Herbster cornered her and forcibly kissed her.

But that denial may not be enough to save Herbster’s campaign, so former NFL player Jack Brewer, who also spoke at the Trump rally, got creative.

“When they talk about Charles Herbster, all of a sudden- he’s the greatest man in the world until right before they know that he’s about to win the election,” Brewer told the crowd. “Now eight or nine women come out with a bunch of lies.”

“They attacked President Trump the exact same way,” Brewer said, referring to the dozens of women who have accused Donald Trump of sexual assault and harassment.

Elsewhere in his speech, Brewer echoed Herbster’s opposition to education about racism, sexuality, and LGBTQ issues, “Lets demand that they put prayer back in our schools. Lets demand that they get rid of this CRT [critical race theory] and all this transgender rhythm.”