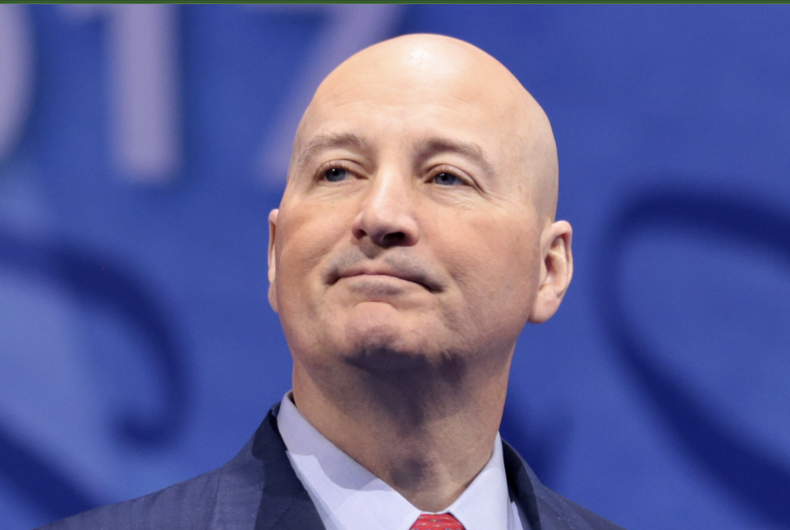 Conservatives in Nebraska are collecting signatures for a 2022 ballot initiative that would change the state constitution by removing the state’s elected education board and replacing it with a committee accountable to the governor alone.

The move would make the Nebraska Department of Education report to the governor’s office, the latest battle in a larger war to keep LGBTQ-inclusive education out of schools.

The petition is being sponsored by Kelli Brady of the conservative organization Nebraskans Against Government Overreach and Republican gubernatorial candidate Michael Connely.

Critics of the petition drive said it would concentrate too much power in the governor’s office and mess up a system that is working.

Jenni Benson, president of the state teachers union, said the proposal would “put total power in the hands of the governor.”

The state education board ended up abandoning the plan after backlash from conservative parents and Nebraska Gov. Pete Ricketts (R).

The Nebraska Board of Education and Ricketts have been at odds over the school board’s desire to incorporate LGBTQ information into school curricula and literature, with Ricketts saying that teaching LGBTQ-inclusive sexual education violates parents’ rights.

After the state board abandoned its plan, Ricketts said in a statement that any changes to the current structure of the department would have to be approved by voters.

“The Nebraska Department of Education should respect that parents are the primary educators of their children, and the agency must continue to be accountable to the people of Nebraska,” Ricketts said.

If this plan were to succeed, discussions of LGBTQ issues could be severely curtailed. LGBTQ advocates point out that states with outright bans on LGBTQ issues – so-called “No Promo Homo” states – being discussed in schools prevent kids from learning critical information about their health.

No Promo Homo laws are proven to be detrimental to LGBTQ students. LGBTQ students in states with stigmatizing laws have less support in school from educators and other students and fewer LGBTQ-related resources (such as Gender-Sexuality Alliances or GSAs). Teachers in these states are less likely to teach about LGBTQ topics in a positive way.

A report published this year titled A Call to Action: LGBTQ+ Youth Need Sex Education found when LGBTQ youth are further stigmatized by laws and policies that shame their identities, they face even more challenges. In fact, in the states with laws that prohibit the positive discussion of LGBTQ sexuality in school health and sex education classes, students were more likely to hear homophobic remarks from school staff, less likely to report feeling supported by school staff, less likely to receive an effective response to harassment from school staff, and less likely to have LGBTQ resources in schools such as comprehensive anti-harassment/ assault policies, inclusive school health services, or Gender-Sexuality Alliances.

A Human Rights Campaign analysis of the 2019 Youth Risk Behavior Surveillance found that 29% of lesbian and gay youth, 31% of bisexual youth and 43% of transgender youth have been bullied on school property, compared to 16% of non-LGBTQ youth. LGBTQ students who reported high levels of anti-LGBTQ victimization at school have lower GPAs, lower self-esteem, higher levels of depression, and are approximately three times more likely to have missed school in the past month due to feeling unsafe, compared to their less frequently victimized peers.

Forty-two percent felt uncomfortable because of their gender expression. Around 45% and 44% and of respondents, respectively, avoided gender-segregated bathrooms and locker rooms at school, and 28% reported that their schools had policies preventing them from using the correct bathroom. In total, 59% of students reported that they’ve experienced anti-LGBTQ discriminatory policies at their schools.

In some of the most disturbing news, almost 69% of students said they have been verbally harassed at school and a quarter have been physically harassed. Eleven percent have been assaulted at school because of their gender or orientation.

Nearly a third of LGBTQ students said they have even skipped an entire day of school in the previous month because they feared for their safety, and nearly a fifth of LGBTQ students (17.1%) reported having ever changed schools due to feeling unsafe or uncomfortable at school.

It is the responsibility and role of schools to provide a safe and supportive learning environment for all of their students.