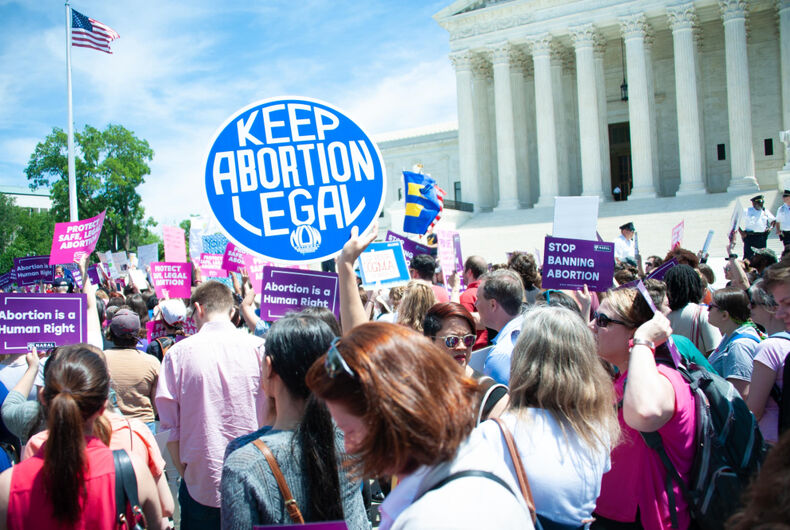 Pro-choice activists rally to stop states’ abortion bans in front of the Supreme Court in Washington, DC on May 21, 2019 Photo: Shutterstock

It is believed that the Supreme Court will overturn the standard-setting Roe v Wade. If it actually happens, which seems likely with the conservative swing of the judges, it will validate sweeping anti-abortion legislation going on across the country in Republican-led states. A significant case for the right to privacy, this decision could set precedent for government intrusion in citizens’ private lives. This could even mean legislation against who we sleep with, marry and love.

In the 1973 landmark case Roe v. Wade, the Supreme Court applied the core constitutional principle of privacy and liberty to a woman’s ability to terminate a pregnancy. The Court held that the constitutional right to privacy includes a woman’s right to decide whether to have an abortion.

At the time the U.S. was in a myriad of crises, and at an inflection point in history. In the same year, President Richard Nixon (R) doxxed the gold standard, moving the world into a free-floating currency. The Yom Kippur War fomented a world oil crisis, and the country was divided with the civil rights era still fresh. Fifty years on we are still debating about abortion, war-related price squeezes and polarization between America’s left and right. But even more importantly it’s powerful and powerless. New century, same problems.

But attitudes towards abortions have evolved.

Even as the country becomes broadly more accepting of abortions, our political system is still fighting the same battle. Why?

After the landmark decision and the larger civil rights struggle of the ’60s, social conservatism realigned to the Republican Party and instituted a hostile takeover of America’s court system. Over a 50-year period, ramping up considerably in the 21st century, groups of conservative scholars, politicians, and lobbyists worked to systematically install faithful judges on a local, state, and federal level.

If this cabal of regressive thinking has its way, abortion will only be the beginning. The right to privacy is what is actually being decided.

What the court decided in 1973 was that within the first trimester the mother had autonomy over her body before the viability of the fetus. Their decision was based on a specific reading of the 14th amendment. The amendment reads:

Seen from this point, abortion bans, at least in the first trimester, was considered unconstitutional for depriving women of liberty. It also sets precedent for any number of violations of privacy by the state. So how has conservative America brought the country so far behind our moral and political values?

The American political arena went sideways when Trump was able to install three supreme court nominees: Neil Gorsuch, Brett Kavanaugh, and Amy Coney Barrett. Trump unabashedly claimed this victory for the religious right. He kept his word to the religious sect of his voter base.

“Well, if we put another two or perhaps three justices on, that’s really what’s going to be – that will happen,” he said. “And that’ll happen automatically, in my opinion, because I am putting pro-life justices on the court. I will say this: it will go back to the states, and the states will then make a determination.”

But the former president is just the most successful of Republican politicians placing conservative and classist judges all over the country. It is no secret Trump, and politicians like Senate Minority Leader Mitch McConnell (R-KY) work with groups such as the Federalist Society and Heritage Foundation to vet candidates and coordinate plans.

Amanda Hollis-Brusky, the author of Ideas with Consequences: The Federalist Society and the Conservative Counterrevolution, said, “One of the interesting things about Trump, McConnell, Leonard Leo, and the Federalist Society is that Trump made appointments based on friendships, brought his buddies into the administration, had loyalty tests for his appointees, and fired people who displeased him but, when it came to the operation of finding, selecting and confirming judges, it was a completely professionalized shop.”

The Federalist Society was started in 1982 by conservative law students at Yale and the University of Chicago who wanted to create a counterbalance to what they saw as the liberal orthodoxy of law faculties around the country. Antonin Scalia, a former Supreme Court justice, was its first faculty advisor, and a number of prominent conservatives are counted in its ranks, including the Koch brothers, all the conservative Supreme Court justices, and thousands of other influential figures.

Today the Federalist Society has 70,000 members and a presence on almost every university campus and in every major city. It organizes regular talks and events for law students and practicing lawyers that provide an opportunity for conservative lawyers to network and build reputations. Defining the neoliberal orthodoxy, the Federalist Society is for private property, individual choice (unless it’s women’s bodily choices), and cultural conservatism.

Within the American political machine, the group uses its power to influence mainly Republican politicians with astonishing success. McConnell’s whole career has existed thanks to them. With him as head of the senate, since 2017 republicans have appointed 200 judges. With Trump & McConnell leading the charge, 30% of all circuit judges in the country were appointed by the Federalist Society and will serve lifetimes. That is at least 40 years of a court system dominated by this university club turned neoliberal idea house.

The society is well funded, organized, and networked. With their cajoling, Americans will soon lose their right to privacy, and maybe more. Many influential members were privy to Trump’s MAGA insurrection.  John Eastman, a member of the society and chair of its Federalism and Separation of Powers practice group, was one of Trump’s lawyers working to overturn the election.

Anti-democratic and aware they are so, abortion is just the latest shift towards their authoritarian fever dream. The architects of what is America’s cold civil war, the Federalist Society started after students felt ostracized by the liberal collegiate. They have been at war from the beginning. And while they have been willing to lose many battles, it looks like they might win the war for the soul of the country.

The problem with the Federalist Society is they take advantage of our republican system, using an efficiently organized minority to define the majority. It is not just them.

A Princeton study found that since 1980, America has failed to act like a democracy, as they put it “economic elites and organized groups representing business interests have substantial independent impacts on U.S. government policy,” while average citizens “have little or no independent influence.”

As one of the world’s most important special interest groups, the group is part and parcel of the democratic fraud of America. One way to rebalance that is through direct democracy. Americans should directly get a plebiscite once every presidential election, one vote per person. Putting the will of the people first, 66% of Americans should be enough to codify abortion rights.

A tall ask for a political system made to not work, it’s important that the stakeholders of our society put our vote, money, and resources towards regaining fairness in our political process, and saving our right to privacy.