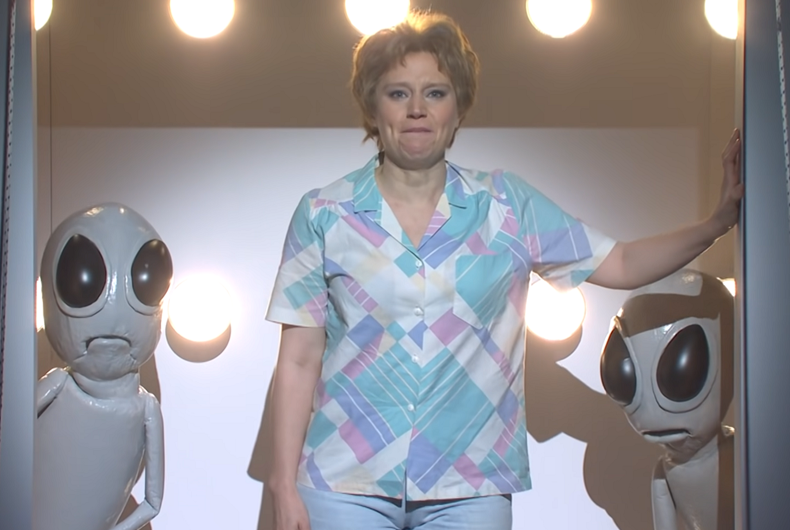 Out actor Kate McKinnon announced that she’s leaving SNL after ten years on the show during the cold open of this weekend’s show.

McKinnon dressed in the pastel shirt of her character Colleen Rafferty, the woman who keeps having paranormal experiences that involve her being naked from the waist down and treated badly by aliens, ghosts, or other beings.

Related: Kate McKinnon skewers Liz Cheney for betraying her lesbian sister & then getting betrayed herself

Usually she recounts her experiences to scientists and reenacts them as they react incredulously, and that’s how she started this weekend’s sketch.

She explained how she was abducted by aliens yet again: “I get dumped on board the bottom of the ship, and I see my old pals, the little gray aliens with the big dumb eyes. And it hit me: Colleen, this might be the most stable relationship you’ve ever had.”

But instead of the sketch just ending, McKinnon went to an alien ship.

“Well, Earth,” McKinnon said as Rafferty, “I love ya, thanks for letting me stay a while.”

The season 47 finale this weekend was also the last episode for SNL actors Aidy Bryant, Kyle Mooney, and Pete Davidson.

Alex Jones spouts off with strangest conspiracy theory yet