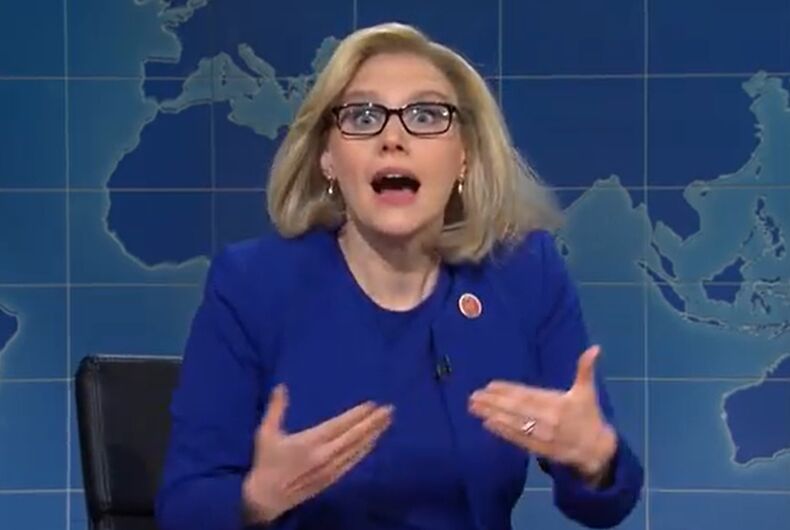 Out Saturday Night Live actor Kate McKinnon excoriated Rep. Liz Cheney (R-WY) for betraying her lesbian sister for political gain years ago only to have her fellow Republicans turn on her last week after she criticized Donald Trump.

“Conservatives are leaving me high and dry,” McKinnon said in a stilted, nasal Liz Cheney voice. “And what more can I do for you people? I opposed gay marriage even though my own sister is a lez.”

House Republicans voted to remove Cheney from her position as House Republican Conference chair in a closed-door vote last week after she voted to impeach Donald Trump for his connection to the January 6 MAGA Riots and then spent months criticizing him and other Republicans for not conceding that President Joe Biden won the 2020 elections fairly.

Cheney is the daughter of former Vice President Dick Cheney and the sister of Mary Cheney, who is married to another woman. In 2013, Liz Cheney said in an interview that “I love Mary very much” but that she does not support same-sex couples being allowed to marry.

McKinnon mocked Cheney’s belief that there is a place in the GOP for Republicans who oppose Trump, smarmily listing other Republicans who supposedly agree with her like “Dick Cheney… Anne Romney… her horses….”

But Cheney can’t keep the positive facade going in the sketch.

“I don’t know what I did wrong,” McKinnon whined. “Look at me, I’m everything that a conservative woman is supposed to be: blonde, mean.”

“I was done,” McKinnon replied.

“I even tried to take away protections for gray wolves,” she pleaded. “If gay marriage is number one for lesbians, wolf rescues are like number two.”