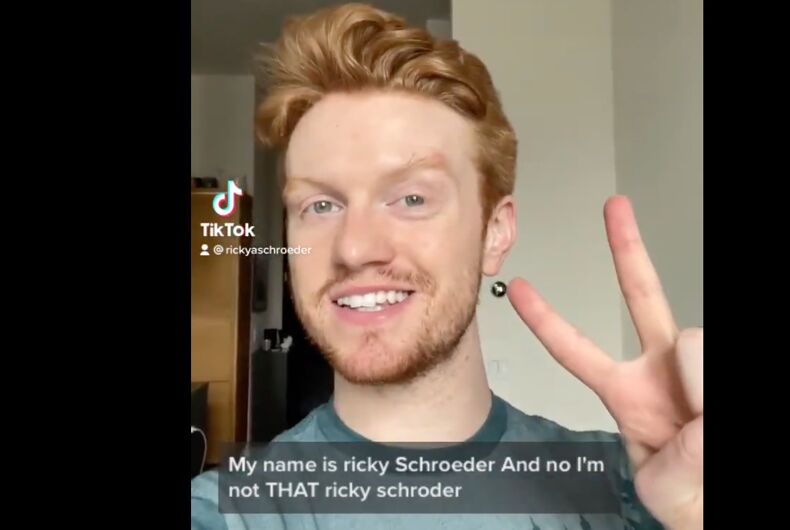 Silver Spoons actor Ricky Schroder went viral after berating a Costco employee over the store’s mask policy. Gay actor Ricky Schroeder, however, felt the blowback on social media. Schroeder, who includes “(Not THAT Ricky Schroder)” in his username, was forced to make a video explaining the differences between the two despite some unfortunate similarities.

Because it wasn’t the first time he’s had that problem, but this time the Twitter algorithm helped push the mistake.

“Due to recent events I would just like to clarify that I am a gay liberal 29 year old redheaded actor who does NOT beat his wife nor vote for trump nor give bail money to white supremacist terrorists,” Shroeder posted in 2020 after the other actor had made the news for contributing to Kyle Rittenhouse’s bail funds. Rittenhouse shot and killed two Black protestors in Wisconsin. “Oh and I spell my last name with an ‘e’ after the ‘o’!”

“I hate that I have to retweet this again today, 5 months later,” Shroeder posted yesterday along with the old tweet, “and add that even tho I’m fully vaxxed, I still have a years worth of anxiety pent up to make me want to keep my mask on for a while, and I would never harass a costco employee and I don’t have a Costco membership”

Schroder posted video of himself accosting a Costco employee when he was refused entrance to the store because he wasn’t wearing a mask. While the CDC has changed the mask guidelines for fully vaccinated people, retailers still have the option to ask all customers to wear a mask before entering.

But when Twitter included Shroeder’s account as part of the “trending” list of tweets and accounts related to the far-right actor’s latest stunt, things got a little hairy. The mask-wearing liberal tried to get the service’s attention, but hours later he was still included in the mix.

“The next time that other asshole Ricky Schroder does some stupid shit,” he tweeted to the Twitter account, “can you not link my liberal gay self, with a pic of me in drag with Kelly Clarkson as my banner pic, and my display name as ‘Not THAT Ricky Schroder’ to the trend? Thnx.”

Hey @Twitter , the next time that other asshole Ricky Schroder does some stupid shit, can you not link my liberal gay self, with a pic of me in drag with Kelly Clarkson as my banner pic, and my display name as ‘Not THAT Ricky Schroder’ to the trend? Thnx @TwitterMoments pic.twitter.com/dgum2mfTgd

He even made a humorous video that highlighted the stark differences between the two. The gay actor has worked more lately, for example.

PSA: I know it’s confusing, but stay with me here! I’m not Ricky Schroder! pic.twitter.com/fNytNNNAnR

Still, it got him some more followers as folks confessed that’s how they’d discovered his account and, he said, the blowback wasn’t as fierce this time.

It’s actually so far much better than the last time 😂