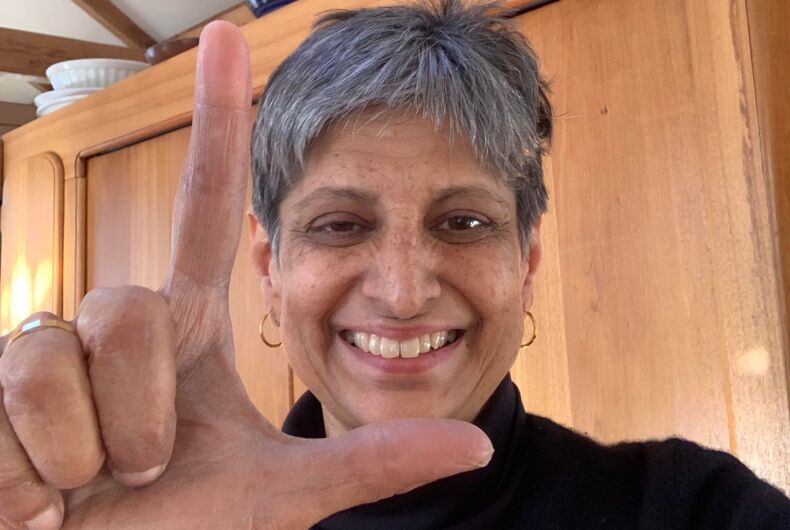 Though I did not know Urvashi Vaid well, since the first day we met back in Boston in the late 1970s, I have considered her my friend. I believe she thought of me as her friend as well.

During those exciting and heady days of the movement for liberation for lesbian, gay, bisexual, and trans people, Urv and I were connected to the progressive national weekly newspaper, Gay Community News. I wrote for the paper for many years and served as its Features Editor for a short period.

I first met Urv on a typically hectic weekly Friday evening at the offices of GCN on Bromfield Street in Boston completing the final edits of the paper, and later in the night, joining with community members to stuff individual copies into mailing envelopes for sorting and shipping around the U.S. and many countries across the globe.

We did not have the computerized technologies that newspapers have today. We typed article copy using electric typewriters. As copy was completed throughout the week, we drove it to a printing company across the Charles River in Cambridge, which converted it into right and left justified print on camera-ready sheets.

One of us picked up the sheets, and our artistic director cut and pasted news stories, features stories, classified ads, commercial advertisements, and other forms of copy with “printer’s wax” as backing. They then adhered these to large pages for printing.

Someone brought the completed copy-ready sheets to the printer, ready in time for Friday night stuffing.

Though very hectic in which we faced tense and frustrating time crunches, Friday nights on Bromfield Street were wonderous occasions. I remember engaging in deep and very serious political discussions with Urv. Though we did not always agree, we always respected the other person’s points. She always presented her positions with strength and compassion.

From the very beginning, I learned so much from Urv, and her unquenchable curiosity, her brilliance, her fearless courage, and her deep passion for social justice. I knew right away that she would become one of the most significant change agents of our times.

Urvashi Vaid was born in 1958 in New Delhi, India. When I met her, she was studying law at Northeastern University. She had previously graduated from Vassar College.

In her first career position, she served as a staff attorney at the National Prison Project of the American Civil Liberties Union. There, she began the group’s work on HIV and AIDS in prisons.

She spent nearly 10 years at the National LGBTQ Taskforce (then called the National Gay and Lesbian Taskforce) in Washington, D.C. and served as its executive director from 1989 to 1992. Her work shed a bright light on the disastrous HIV/AIDS policies of the George H. W. Bush administration.

During her time at the group, she cofounded the Creating Change conference, which is now in its 33rd year. I attended the first 10 conferences, and Urv always made time to sit down with me and catch up on the time that had passed.

Urv became the deputy director of the Governance and Civil Society Unit of the Ford Foundation from 2001 to 2005, and she served on the board of the Gill Foundation between 2004 and 2014.

The next chapter of her life between 2005 and 2010 involved serving as executive director of the Arcus Foundation, a funder of LGBTQ social justice and conservation initiatives internationally. In 2012, she founded LPAC, the first lesbian super political PAC that donated millions of dollars to candidates who promote social justice through legislation.

Her list of achievements and activist positions seems virtually endless. Most recently, Urv was president of the Vaid Group that connected with national and international organizations working to advance issues of diversity, equity, justice, and inclusion.

Also a prolific and award-winning author, Urv’s published works include books, research articles and reports, and social commentary. Her books are Irresistible Revolution: Confronting Race, Class and the Assumptions of LGBT Politics (2012), and Virtual Equality: The Mainstreaming of Lesbian and Gay Liberation (1996).

Urv and I were often on the same page politically. I remember after the publican of Virtual Equality, Urv and I discussed the dangers of our movement going mainstream and the ways in which the capitalist system coopts movement struggles.

She agreed with me that as we gained greater social and media visibility, the parameters of the LGBT movement had shrunk to what I referred to as “the Four M’s of the Movement”: Marriage Equality, Media Visibility, Military Inclusion, and Making Money.

While these “M’s” are undoubtedly important, they are all assimilationist rather than revolutionary goals. We were, instead, calling for a restructuring of society by demolishing the patriarchal white supremacist systems that marginalized so many and privileged so few.

Urv acknowledged me in a footnote in Virtual Equality, which probably symbolized my position in her life. But though we had limited contact after she moved from Boston, it seemed that little time had passed whenever we reconnected, for we picked up where we had left off.

We lost a great leader and a friend to those who knew her and those who never met her. We will never see the likes of an Urvashi Vaid again because she was one of a kind. As we say in Yiddish, Urv was a real mensch.

May her memory be a blessing throughout time.