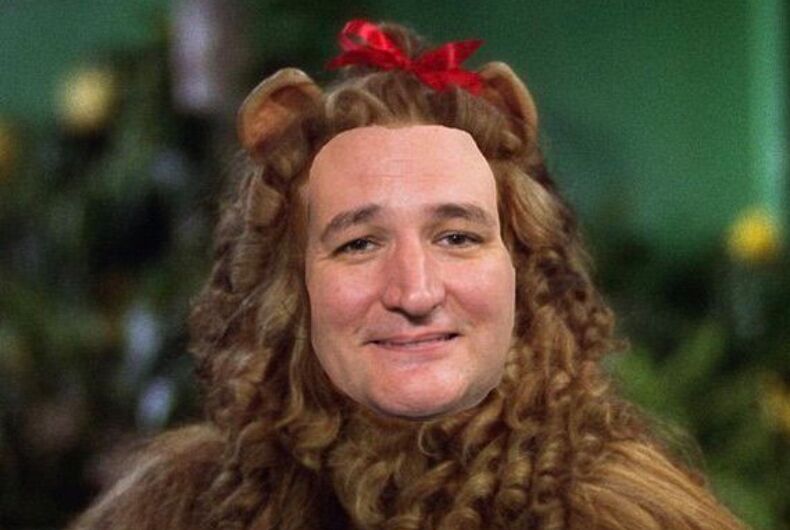 Sen. Ted Cruz (R-TX) has some striking similarities to the Cowardly Lion.Photo: Meme

Sen. Ted Cruz (R-TX) may have been Donald Trump’s primary opponent for the Republican presidential primaries, but after Trump’s win, he quickly became one of the most sycophantic members of the Senate. Trump called Cruz’s wife ugly and said his father was part of a conspiracy to kill former President John F. Kennedy. Trump even gave him the nickname “Lyin’ Ted.”

Now the erstwhile rival is condemning GOP candidates who are kissing Trump’s butt in the hopes of an endorsement despite his own about-face. Cruz refused to endorse Trump until the last minute, saying the business tycoon

Before he eventually caved and endorsed Trump, he said, “I am not in the habit of supporting people who attack my wife and father publicly. That would reduce me to nothing more than a boot-licking sycophant with no pride and no spine.”

After Trump’s election, Cruz because one of Trump’s most ardent defenders. He voted against impeachment twice and excused the former president’s attempts to overturn the results of the election and subsequent terror attack on the Capitol by Trump’s supporters.

“Just once, I’d love to see a Republican candidate stand up in a primary and say, ‘I am a moderate, establishment squish. I stand for absolutely nothing.’ It would be refreshingly honest at least. But nobody says that,” Cruz told attendees at an event for Pennsylvania Senate candidate David McCormick.

“What an absolutely vile person and hypocrite,” Lori Hannah tweeted in response. “He has kissed Trump’s ring and lied for him so many times I am surprised his nose isn’t 20 feet long. Ole Ted was ok with Trump insulting his wife. SMH”

“There is a full mini-series of video of this asshat kissing up to Trump. This guy is the worst human. Pure garbage,” Brad Kratz added.

@SenTedCruz What an absolutely vile person and hypocrite. He has kissed Trump’s ring and lied for him so many times I am surprised his nose isn’t 20 feet long. Ole Ted was ok with Trump insulting his wife. SMH https://t.co/csmw5Bm7mH

And for those who do not remember. pic.twitter.com/ue8mzDbeQg