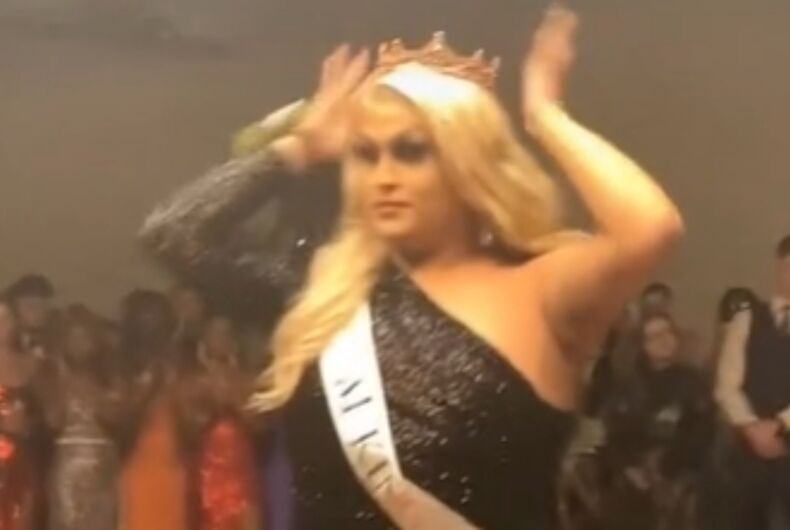 An 18-year-old non-binary high school student in the conservative town of Jeffersonville, Indiana was recently crowned prom king of Jeffersonville High School while wearing a sequin gown and heels at the dance event — and the video of the student’s coronation is going viral.

The student, Cristian Hernandez, wore their dress and stood alongside four other competitors in suits while waiting to hear who won the crown. Once announced as the winner, Hernandez spun and strutted down the red carpet, striking poses in their crown and sash as fellow students applauded and cheered.

“I was just planning to do something really crazy for prom, and I thought, ‘Why not go in drag?’” Hernandez told NBC News. “In my head [I was] thinking, ‘I’m not going to win.’ I was just praying to the gay lords.”

Hernandez said that they spent five hours getting ready for the event. The TikTok video of their win has since gotten over 162,900 views, 53,000 likes and 1,000 on the video-sharing platform.

In the caption, Hernandez wrote, “king… queen… whatever you wanna call it im still that b****.” Hernandez said that some of the boys at the school had a problem with them winning the prom king title, but that didn’t bother them.

“You can’t let people tear you down,” Hernandez told NBC. “I want to inspire people to try and break down those barriers that have been put up… Really be yourself, and confidence is key.”

Hernandez’s win is all the more remarkable considering the region’s conservatism. Jeffersonville’s population is 80 percent white and the county leaned about 57 percent Republican in the 2020 elections, in accordance with the red state’s presidential votes that same year.

In March, Indiana Gov. Eric Holcomb (R) vetoed a bill that would have banned transgender girls and women from participating in school sports.

While issuing his veto, Holcomb noted that there is currently a transgender middle school student in Indiana suing the state in federal court for not being allowed to participate in school sports, likely referring to a transgender boy in Martinsville, Indiana who filed suit in 2021 after he was forced to use the girls’ bathroom, was constantly misgendered by teachers, and was told that he couldn’t play on the boys’ sports teams.

The organization also throws the annual Pride event which is focused on treating people like people and not tearing each other down and promoting Southern Indiana as a place where kindness and diversity thrives.”

Evan Stoner, board president and founder of Southern Indiana Pride, told Yahoo!, “I don’t meet many people who are openly homophobic or openly trying to tear down the LGBT community. You get political and partisan division as well as national media narratives that make this topic very messy sometimes.”