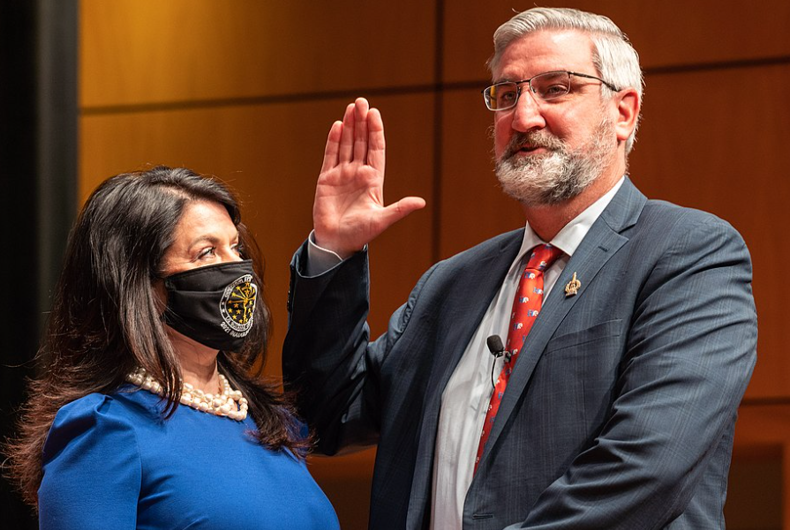 The Republican governor of Indiana has just vetoed a bill that would have banned transgender girls and women from participating in school sports.

Gov. Eric Holcomb (R) stated in a letter yesterday that the legislation was too vague and broad and even suggested that the bill is unconstitutional and addresses a nonexistent issue in the state.

“Amidst the flurry of enthusiasm to protect the integrity and fairness of women’s sports in our state – a worthy cause for sure – this bill leaves too many unanswered questions,” Holcomb wrote in the letter announcing his veto.

He remarked on the “wide-open nature” of the bill’s grievance provisions, saying that there will be confusion about who will establish the grievance process and how.

Holcomb also cited lawsuits that have been filed against states that passed similar laws. The lawsuits have argued that such bills violate equal protection provisions of the Constitution and Title IX, which bans discrimination on the basis of sex in all schools that receive federal funding. The Biden administration has said that Title IX applies to discrimination against LGBTQ students since it is impossible to discriminate on the basis of sexual orientation or gender identity without taking sex into account.

“In the two cases with initial rulings thus far, the courts have enjoined or prohibited laws with these same substantive provisions from taking effect based on equal protection grounds,” Holcomb wrote.

He also noted that there is currently a transgender middle school student in Indiana suing the state in federal court for not being allowed to participate in school sports, likely referring to a transgender boy in Martinsville, Indiana who filed suit in 2021 after he was forced to use the girls’ bathroom, was constantly misgendered by teachers, and was told that he couldn’t play on the boys’ sports teams.

“Any bill brought forward should address the issues raised in these lawsuits,” Holcomb wrote.

Last, Holcomb noted that there is “no evidence” to support the idea that transgender girls are making it impossible for cisgender girls to participate in sports in the state. He said that the Indiana High School Athletic Association (IHSAA) “has done an admirable job to help maintain fairness and consistency in all sports.”

“Not a single case of a male seeking to participate on a female team has completed the process established by IHSAA’s not decade-old policy,” Holcomb wrote.

LGBTQ advocates hailed the decision to veto the legislation.

“This victory belongs to the trans youth of Indiana, who deserve to live as their authentic selves and to play the sports they love, free from discrimination,” the Indiana ACLU’s Katie Blair said in a statement. “This win wouldn’t have been possible without the thousands of Hoosiers who voiced their strong opposition to state legislators and who showed up at the Statehouse to oppose this harmful bill. Discrimination has no place in our state.”

What does “fruity” mean? The origins of the term “fruit” to describe a gay man