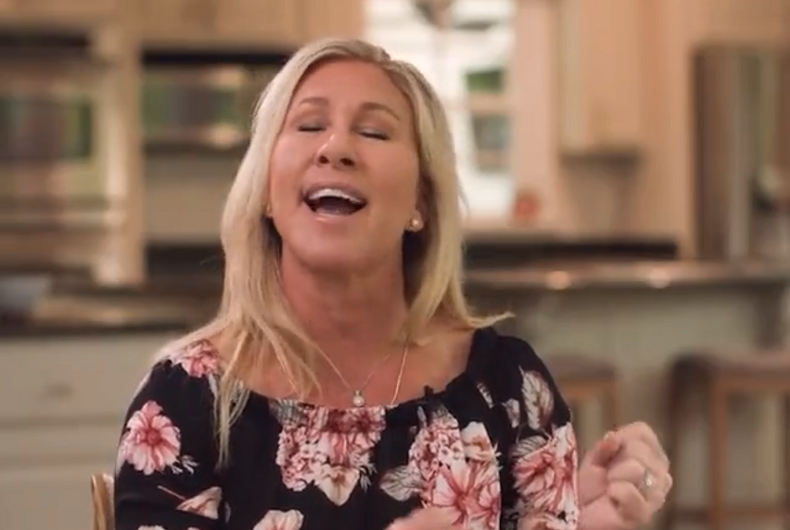 In an interview with an ex-gay activist who said his mother’s cancer turned him straight, Rep. Marjorie Taylor Greene (R-GA) said that Satan promises women that they can keep their boyfriends if they get an abortion, which she said was a lie Satan uses to convince women to terminate pregnancies.

“Abortion is a lie that Satan sells to women,” Greene told ChurchMilitant.com’s Michael Voris in an interview. “He sells it to them.”

Related: Marjorie Taylor Greene is freaking out that she’s going to court over her role in MAGA insurrection

“When Satan sells a sin, it’s not loud,” she said. “It’s whispered softly and gently into your ears and into your soul.”

“And he tells you it’s OK. And he sаys, ‘It’s just this one thing. You’re just gonna get it done, get it over with.'”

“And then he tells you a promise,” Greene continued. “He promises you, all these dreams that you have in your heart, and that’s how Satan sells a sin and that’s how he sells abortion.”

“He tells a woman that you just have to go to this clinic, just gonna get it over with, and then you’re going to- That guy, he’s gonna stay with you. That boyfriend or the guy, whoever he is, he’s gonna marry you, sweep you off your feet.”

She said that Satan promises women that they can “pursue that career and all your dreams are gonna come true but it’s the greatest lie.”

It’s not a lie that an unplanned pregnancy can put a damper on someone’s career. The lie, according to Greene, is that women can find as much fulfillment in a career as they can find in motherhood.

“Being a mother is what makes a woman’s dreams come true. It is what gives you the energy inside, the reason why, the love,” she said. “It makes you work harder and longer than you ever could without children because you have a reason, you have your children. And children fulfill a mother.”

Marge Greene says when women get abortions, it’s because Satan has whispered in their ears and promised them that if they do it, the guy they are with will marry them. pic.twitter.com/ybQkSJEOOK

Voris, the man interviewing Greene, has said that he used to have relationships with men that he had to publicly confess “in order to start proclaiming the great mercy of God.”

“I will now reveal that for most of my years in my thirties, confused about my own sexuality, I lived a life of live-in relationships with homosexual men,” he said in a 2020 podcast episode. “From the outside, I lived the lifestyle and contributed to scandal in addition to the sexual sins. On the inside, I was deeply conflicted about all of it. In a large portion of my twenties, I also had frequent sexual liaisons with both adult men and adult women.”

He said that his mother used to pray that he would “give up my sinful life and return home to the Church.” He said that she prayed “to be given whatever suffering needed so that I would be granted sufficient grace to revert” to heterosexuality and that she was diagnosed with stomach cancer shortly after.

“During the last year of her life, I began to change by beginning to frequent the sacraments more often,” he continued. “When my mom died, I pledged at her coffin that I would change. I said, ‘Mom, what you went through for me, you will not have gone through in vain.'”

He said that he returned to the Catholic Church and “was thrilled, over the top with gratitude for what God had done for me through my mom and her suffering.” That is, he was happy his mom got cancer and died so that he could be straight.

“Since my reversion, I abhor all these sins, especially in the world of the many many other sins I have committed having nothing to do with sexuality,” he continued. “I gave in to deep pains from my youth by seeking solace in lust, and in the process, surrendered my masculinity.”