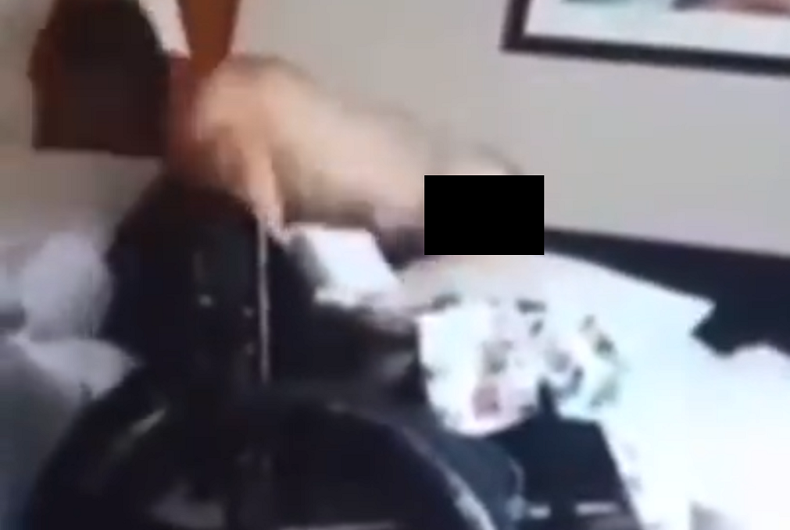 Another embarrassing moment from anti-LGBTQ Rep. Madison Cawthorn’s (R-NC) past have come to light, and Cawthorn’s defense for many of his recent scandals is that he’s not a drag queen.

A video posted online by a group called American Muckrakers PAC shows Cawthorn, naked, humping a friend’s face on a couch while “Hooked on a Feeling” by Blue Swede plays in the background.

Related: Madison Cawthorn demands Republicans be made a protected class, but not LGBTQ people

“This video was sent to us by a former Cawthorn supporter and big donor who asked to remain anonymous,” the PAC wrote in sharing the video. “It pains us to post it but in the public and voters interest we chose to do so.”

Cawthorn himself authenticated it on Twitter when he said that he “was being crass with a friend, trying to be funny. That’s it.” He claimed that it’s part of a “drip drip campaign” and that “blackmail won’t win.” He did not say what he was being blackmailed over.

He was referring to videos and photos that have been leaked to the media. Two weeks ago, a former friend of Cawthorn gave photos of Cawthorn in women’s lingerie to Politico. Cawthorn said that the picture was from a cruise he was on and was “goofy.”

“They’re running out of things to throw at me,” he said at the time, a statement that was later proved false.

Photos published by the Daily Mail last week show Cawthorn with a younger male staffer’s hand on his genitalia. The staffer is his cousin.

At around this time, Cawthorn was caught trying to carry a loaded gun onto an airplane.

While the videos and photos have not all been leaked by the same people or to the same outlets, Cawthorn is saying that it’s a coordinated campaign to end his political career.

In an eight-minute video released in response to many of his recent scandals, Cawthorn said that “the media is pushing a narrative that I’m some kind of drag queen on the side, aside from being a Congressman. And really this is just poor journalism. And I’m not surprised; it is Politico after all, not exactly the same journalistic standards as Fox or Newsmax.”

He said that the photos and videos aren’t important because they were taken “well before I was in Congress.” He did not say exactly when they’re from; Cawthorn is 26-years-old so it’s unlikely they’re more than several years old.

While he said that only the “fake news media” is reporting on the videos and photos, he confirmed that they were real.

“You are witnessing one of the first examples of a politician who grew up with a cell phone in their hand,” he said, referring a “childish” video he made with his cousin, the video of his staffer’s hand on his genitalia. “Most of my colleagues in Congress right now would not be serving in Washington if they grew up within a single mile of a cell phone growing up.”

“I wish we didn’t live in a fallen and sinful world, but unfortunately we do,” he said in defense of trying to bring a loaded gun on an airplane.

Cawthorn also responded to to criticisms of his substantive positions in the video as well as mailers sent by opposing campaigns, appearing to not be able to distinguish between personal scandals and policy disagreements or between the news media and political advocates.

He also did not address sexual harassment allegations made against him by more than a dozen former students of Patrick Henry College, the Christian school Cawthorn attended. He is accused to taking “fun drives” with female students, where he would drive women off campus, drive recklessly while they were locked in the car with him, and ask them intrusive questions about their sexual experience and virginity.

A new hit against me just dropped.

Years ago, in this video, I was being crass with a friend, trying to be funny.

We were acting foolish, and joking.

I’m NOT backing down.

I told you there would be a drip drip campaign.

Blackmail won't win. We will.

I’m ready to keep fighting for you.

I wanted you to know the truth, straight from me. Don’t lose hope, don’t listen to the fake news.

Don’t let the swamp of Washington dissuade or distract you from sending a warrior back to Washington.

I’ve only just begun to fight for you. pic.twitter.com/kDqtzsoquT

Earlier this year, in response to Judge Ketanji Brown Jackson refusing to define the word “woman” during her Senate confirmation hearing, Cawthorn gave a speech in the House where he said a woman is “XX chromosomes, no tallywhacker. It’s so simple.”