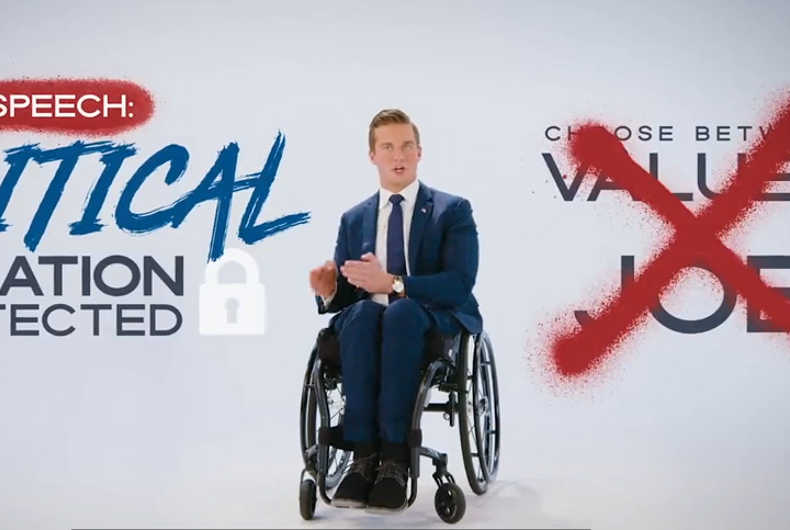 Rep. Madison Cawthorn (R-NC) is demanding that “political affiliation” be made a protected class under federal civil rights law even though he is firmly opposed to adding sexual orientation and gender identity being added as protected categories.

Cawthorn released what he calls his “Contract with America” that Fox News and other rightwing media outlets are hailing as the “new Republican Party platform” or the “GOP alternative to Green New Deal.” The Contract with America is a bog standard far-right wishlist for policy, including things like a federal abortion ban, an end to income taxes, allowing public schools to lead students in prayer, and laws to punish blue states for being liberal.

Related: Madison Cawthorn to divorce after 8 months. He just told young conservatives to “get married young.”

Buried in the two-part video is a demand that political affiliation be added to federal civil rights legislation so that people can sue if they believe that they were fired or denied service at a restaurant because they’re a Democrat, Republican, communist, libertarian, or have another political belief system.

“To prevent further leftist abuse of our right to free speech, we will make sure that Americans’ political affiliation is protected,” Cawthorn said in the video. “Gone are the days where Americans have to choose between their values or their job.”

This is not just surprising considering how often Republicans try to get people fired for their political beliefs; it’s surprising because Cawthorn has opposed expanding federal anti-discrimination laws to include LGBTQ people. Protected classes are usually based on categories of people who have historically faced discrimination, and it’s hard to argue conservatives have historically been marginalized in the U.S.

Currently, federal discrimination legislation doesn’t mention sexual orientation or gender identity. The Biden administration and the Supreme Court have interpreted parts of certain laws’ bans on discrimination on the basis of sex to also ban discrimination against LGBTQ people, because it’s impossible to discriminate against someone because they’re LGBTQ without taking their sex into account.

But that’s not the same protection that could be provided by the Equality Act, a bill that would add sexual orientation and gender identity to federal civil rights legislation that passed the House of Representatives last year but has stalled in the Senate, where Republicans have more power.

Cawthorn himself voted against the Equality Act last year, claiming that the bill would restrict parents’ rights when it comes to health care for their transgender children, something that was not in the bill. In fact, several states tried to pass bills to ban doctors from providing medically appropriate gender affirming care to transgender minors last year – Texas’s governor just mandated that doctors report supportive parents of transgender kids this week – and Cawthorn never spoke out against them.

He also claimed that the Equality Act contained funding for abortion, which is false.

He said in a tweet that the bill “Stops doctors from using medical advice on life-altering gender transition medical services,” which is difficult to parse but shows his opposition to transgender people getting gender-affirming care.

Cawthorn’s words echo those of Donald Trump’s legal team, which argued in court earlier this month that Trump is part of a protected legal class as a Republican and therefore shouldn’t have to testify in legal proceedings brought by New York Attorney General Letitia James, who is a Democrat.

“She has such disdain for this person because he was president, because he is Donald Trump and he could probably win again in ’24,” his lawyer Alina Habba told a federal judge. “He has First Amendment rights. He’s allowed to be a Republican.”

“He’s a protected class,” she said.

The judge asked what protected class Trump is a part of, and Habba responded: “His political speech. If he was not sitting as a Republican and was not a former president who might run again, this would not be happening. So she is discriminating against him for that.”

Trump also opposed the Equality Act, saying that it would violate people “conscience right” to discriminate against LGBTQ people.