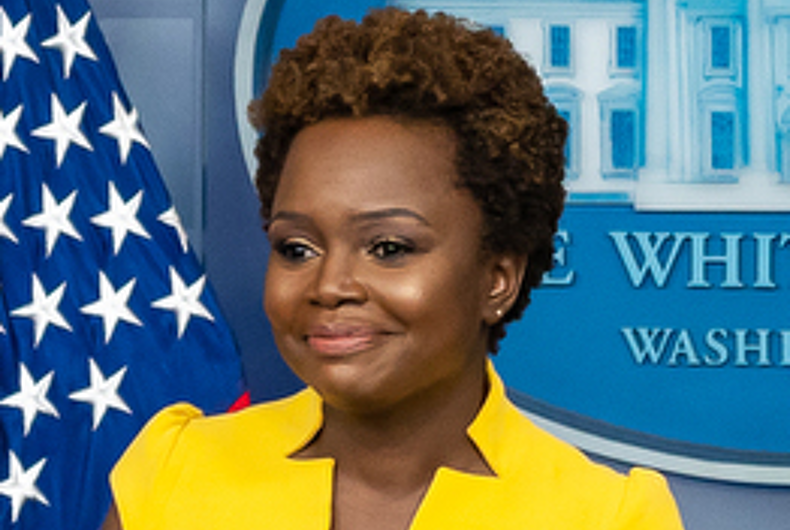 Karine Jean-Pierre, an out lesbian, has been named the next White House Press Secretary. Jean-Pierre will be the first out LGBTQ person and the first Black person to hold the office.

She was the first gay woman and only the second Black woman to lead a White House press briefing in the James S. Brady Briefing Room when she led the briefing last year.

She currently serves as Deputy Press Secretary under Jen Psaki. Jean-Pierre will replace Psaki, who had announced she would vacate the role after a year in the role for a job with MSNBC. Her last day will be May 13.

Jean-Pierre led the White House’s participation in Spirit Day last year and said it was important to her because “I could only hope that young people who might be watching or see clips of this briefing will know that they are supported and represented in the highest levels of government today.”

“Karine Jean-Pierre is a brilliant communicator and person of tremendous intelligence, humor and poise, skills that will serve her and our country well in her new role. There are few jobs more visible or more important to our democracy than to share information with the White House press corps and answer their questions,” GLAAD President and CEO Sarah Kate Ellis said after the news of the promotion surfaced.

“To have an out queer person of color speak for the President of the United States says everything about Karine’s talent and heart, and recognizes that LGBTQ people can belong, contribute and succeed in every room. Our whole community looks forward to seeing Karine deliver for our nation and represent every LGBTQ person with pride.”

Psaki also praised Jean-Pierre on Twitter in a lengthy thread.

“She is passionate. She is smart and she has a moral core that makes her not just a great colleague, but an amazing Mom and human. Plus, she has a great sense of humor,” Psaki tweeted.

“I can’t wait to see her shine as she brings her own style, brilliance and grace to the podium.”

She will be the first black woman and the first openly LGBTQ+ person to serve as the White House Press Secretary. Representation matters and she will give a voice to many, but also make many dream big about what is truly possible.

She is passionate. She is smart and she has a moral core that makes her not just a great colleague, but an amazing Mom and human. Plus, she has a great sense of humor.

I can’t wait to see her shine as she brings her own style, brilliance and grace to the podium.

The first Black woman to conduct a White House press briefing was Judy Smith in 1991. She served as Special Assistant to the President and Deputy Press Secretary under President George H.W. Bush from 1991 to 1993. Her crisis management skills guided the administration through the public controversy around Clarence Thomas’s nomination to the Supreme Court, beginning her reputation as a “fixer.”

Originally from the French West Indies island of Martinique, Jean-Pierre was raised in New York City and attended graduate school at Columbia University. She started her career in politics working for the John Edwards campaign in 2004 and later worked for Barack Obama’s 2008 and 2012 campaigns as well as Martin O’Malley’s 2016 presidential campaign.

People who have followed the 2020 Democratic primary closely may remember Jean-Pierre from a viral video of a white, male animal rights activist taking Harris’s microphone away from her during a 2019 MoveOn forum. Jean-Pierre leaped to her feet to grab the mic back, throwing herself between the intruder and Harris.