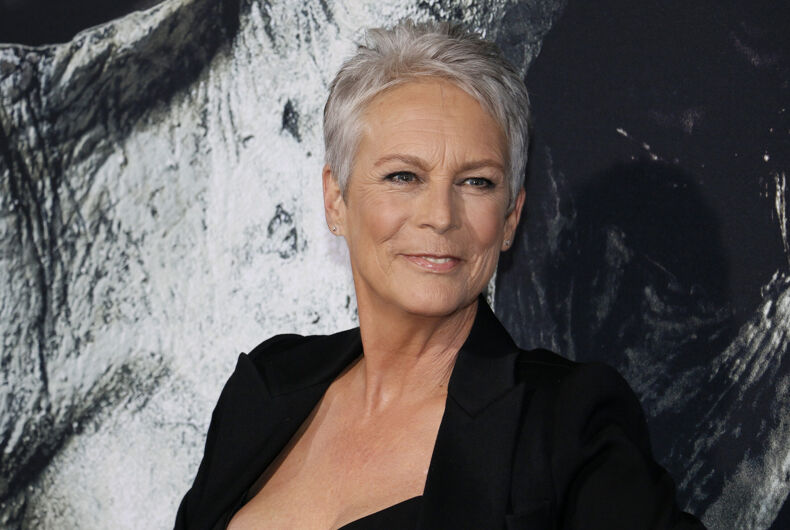 Jamie Lee Curtis has long established herself as a talented movie actress. But in recent years, she has also emerged as a true LGBTQ ally.

From speaking out against anti-LGBTQ laws to supporting her own transgender daughter, Curtis has set an example of how fellow celebrities and parents can support the queer community.

Here are five times that Curtis has been an awesome LGBTQ ally.

The trailer for the madcap action dramedy Everything Everywhere All At Once shows Curtis playing a joyless IRS tax clerk who audits a Chinese laundromat owner who is experiencing a multi-dimensional split with reality.

However, the entire film reveals that, in an alternate dimension, Curtis’ character and the laundromat owner are in a tender lesbian relationship. Granted, in their parallel dimension, both women have large floppy sausages for fingers, and their overly sentimental relationship is played somewhat for laughs.

The film makes up for it by centering itself around another real-world lesbian relationship that is taken quite seriously. The role was the first explicitly queer character Curtis has played on the big screen and was notable considering how rarely famous heterosexual actresses play lesbian roles in mainstream theatrical releases.

It’s one thing to support a trans child. It’s quite another to dress up as a sorceress to officiate their wedding. But that’s exactly what Curtis will do to support her daughter’s relationship.

Curtis revealed that her adult child, Ruby, was trans in July 2021. More recently, she told late night talk show host Jimmy Kimmell that she had ordered a dress so she can officiate the wedding as the sorceress Jaina Proudmoore from ultra-popular massively multiplayer online game World of Warcraft.

The week before speaking with Kimmel, Curtis posted a supportive birthday message to her daughter, which read, “Happy birthday Ruby. I am proud 2 be your mother & am sending support 2 all trans families across the US targeted by conservative legislatures & I VOW 2 use my freedom of speech 2 SUPPORT my child & ALL trans children trying 2 live FREELY as who they are.”

The message included a photo of Curtis pumping her first and raising her leg into the air while wearing a trans Pride t-shirt.

In a wide-ranging interview, Curtis said she fully supports outing anti-queer politicians who legislate against the LGBTQ community.

Her comment began with her stating that she doesn’t like when people ask pro-LGBTQ allies about their own sexual orientations.

“People’s private lives are their private lives and whether I’ve ever kissed a girl – have not – is irrelevant to whatever advocacy I participate in,” she said.

The actress said speculation about the orientation of public figures has become “sort of destructive cocktail party fodder what people’s sexuality is and should be off-limits. Unless, “you legislate anti-gay legislation but are gay. I fully accept outing those people for the hypocrisy.”

March 2019 – Curtis speaks out against a barbaric anti-gay law

In March 2019, the Islamic nation of Brunei passed a law punishing consensual sexual encounters between same-sex adults with death by stoning.

That same month, Curtis was one of numerous Hollywood celebrities who spoke out against the law, calling it “unjust and barbaric.” In a March 28, 2019 tweet, she supported a boycott of hotels owned by the country’s sultan, including the famous Beverly Hills Hotel in California.

While conservative pundits criticized the boycott as ineffective, following months of public backlash and bad press, the Sultan of Brunei announced that his country would not enforce the law.

In the weeks following the deadly shooting at the Pulse nightclub in Orlando, Florida, Curtis joined 48 other celebrities who helped commemorate the 49 people killed in the massacre.

Curtis commemorated Amanda Alvear, a loving aunt who had attended the club’s Latin Night with her friends, believing gay bars to be safer and more fun than straight bars.

“At 25 years old, Amanda shed 180 pounds with the help of surgery and exercise,” Curtis said when recounting Alvear’s life. “She hoped to leave her job in a pharmacy once she completed her nursing degree. She documented her new look in selfies and treated herself and her nieces to new clothes.”