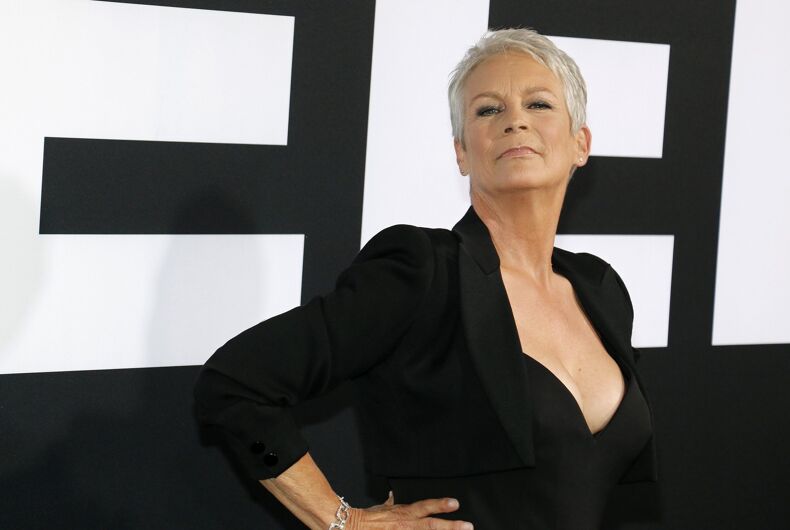 Last year, legendary actor Jamie Lee Curtis announced that her second child is transgender and that she would be officiating her wedding.

Now, it seems Curtis is still proud as ever. In a touching tweet, she wished her daughter, Ruby, a happy birthday and declared her support for trans people everywhere.

“Happy birthday Ruby. I am proud 2 be your mother & am sending support 2 all trans families across the US targeted by conservative legislatures & I VOW 2 use my freedom of speech 2 SUPPORT my child & ALL trans children trying 2 live FREELY as who they are.”

Along with the message, Curtis posted a photo of herself pumping her first and leg into the air while wearing a trans Pride t-shirt.

On Instagram, Curtis posted the same photo along with a longer message.

“This country was founded on freedom,” she wrote. “A profoundly simple idea that everyone living here should be free to dream and achieve what they want freely. OUR declaration of independence promises that we are endowed with certain unalienable rights including Life, Liberty and the pursuit of Happiness…..AND that whenever any Form of Government becomes destructive of these ends, it is the Right of the People to defy it to ensure Safety and Happiness. A profound idea. Safety and Happiness!”

“Now politicians are proposing that parents providing gender-affirming care for THEIR OWN children are felons and deserve prison time. These laws are discriminatory, unjust, and anti-American. Freedom of expression includes gender expression!”

Curtis’s initial revelation that her daughter is trans came in an interview with the AARP magazine, where she said that she and her husband Christopher Guest “watched in wonder and pride as our son became our daughter Ruby.”

This isn’t the first time Curtis has shown her support for LGBTQ people. She also announced in 2020 that she would produce, direct, and star in How We Sleep at Night: The Sara Cunningham Story, a film about a real-life “devout Christian mother [who learns] to come to terms with her son being gay” and goes on to found the “Free Mom Hugs” organization to support LGBTQ  people.

“I was moved by her journey,” Curtis said. “And I continue to be thrilled as her movement is catching on.”