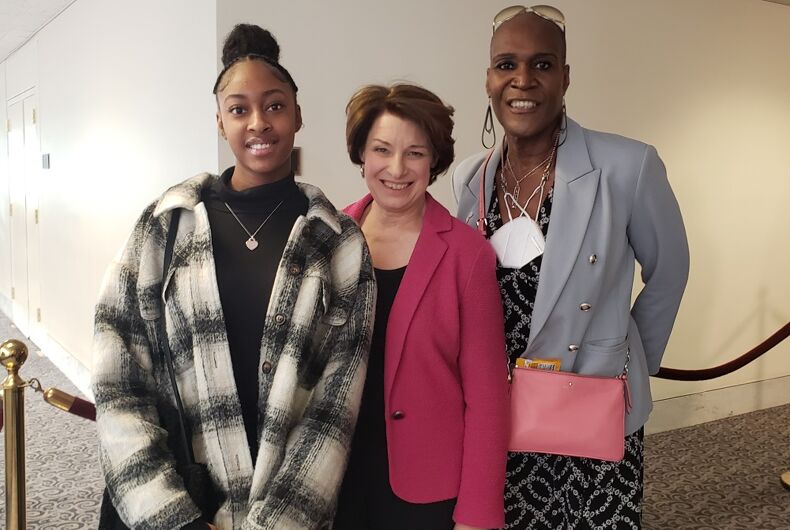 Andrea Jenkins with her granddaughter and Sen. Amy KlobucharPhoto: Provided

In the summer of 1979, I was an incoming freshman at the University of Minnesota, Twin Cities. I was enrolled in the Summer Institute, a remedial program designed to familiarize urban youth to college life prior to some 50,000 plus students converging on the campus in the fall.

After growing up in Chicago, I found Minneapolis a total culture shock. At that time, it was a very fair question to ask, “Are there Black people in Minnesota?”

Related: Ketanji Brown Jackson made history as the first Black woman on the Supreme Court

I was homesick, lonely, intimidated, and not quite sure if I could make it in that ultra-white environment. I said as much to my accountability partner, a young Black woman from Minneapolis. She encouraged me to stick it out, saying, “You never know — you might end up at Harvard one day.”

That was 43 years ago. And it still took me 20 years to obtain my bachelor’s degree.

To be clear, a whole lot of life happened in those 20 years. I worked full-time, got married, and got divorced. That marriage produced an amazing daughter, and I eventually came to terms with my true authentic identity as a transgender woman.

I had known I was transgender since I was four-years-old, but I was afraid to come out. Afraid that I would lose my family, my ability to earn a living, or even my life. But I knew that if I did not make a change, I would likely not survive. So at age 30 I took the risk, and my life began to soar.

I obtained a master’s degree in community economic development. I began working as a senior policy aide for a Minneapolis City Council member and got involved in politics.

I subsequently earned an MFA in creative writing from Hamline University and later published a collection of my poetry. I went on to lead the largest Transgender Oral History Project in America, housed at the University of Minnesota, where it all began for me.

In 2017, I became the first out Black trans woman elected to public office in the United States when I joined the Minneapolis City Council, eventually being elected vice president by my peers.

Then, in 2018 it happened. Through a fellowship from the Victory Institute, an organization committed to helping LGBTQIA+ individuals get elected, I attended the Senior Executive Leaders in State and Local Government program at the Kennedy School at Harvard University.

Some may call that perseverance.

During her Supreme Court confirmation hearings Justice Ketanji Brown Jackson related a story similar to the one I just shared. She explained, “I was walking across the yard in the evening, and a Black woman I did not know was passing me on the sidewalk, and she looked at me. I guess she knew how I was feeling. She leaned over as we passed and said, ‘Persevere.’”

When asked what she would tell young people to inspire them, Judge Jackson said, “I would tell them to persevere.”

I had the incredible opportunity to take my 14-year-old granddaughter to Washington, D.C. to witness the confirmation hearings for the first Black woman ever nominated to the Supreme Court. Aniyah and I sat a mere three rows behind the erudite jurist as she was peppered with inane queries from Republican lawmakers who could not handle the reality of a brilliant Black woman with credentials that eclipsed those of some of the current members of the court.

Just about 14 years ago, I wrote a poem, inspired by artist John Baldessari, in honor of my granddaughter.

“Pure Beauty: A Poem For Aniyah”
​
I hope that in time you will sit on a bench in Union Square
And get a whiff of falafel and hummus from the street vendor
And that you stroll leisurely along 5th Avenue
And see the holiday windows at Macy’s and Tiffany’s

For you I hope the birth of a grandchild
As beautiful as your own child and that at least once
You will wake up in Minneapolis
And go to sleep in Paris.

And that you meet a photographer
Who will capture your pure beauty
For the entire world to see.

All these things I hope for you
And love, true love.

My granddaughter is well on her way to bringing these hopes and wishes to fruition. And Judge Jackson is the first Black woman to become a Supreme Court Justice.

But I am telling all young people — female, male, trans, non-binary, disabled, low wealth, Indigenous, Black, Latinx, Muslim, Jewish, Christian: there are still many firsts out there. Persevere.