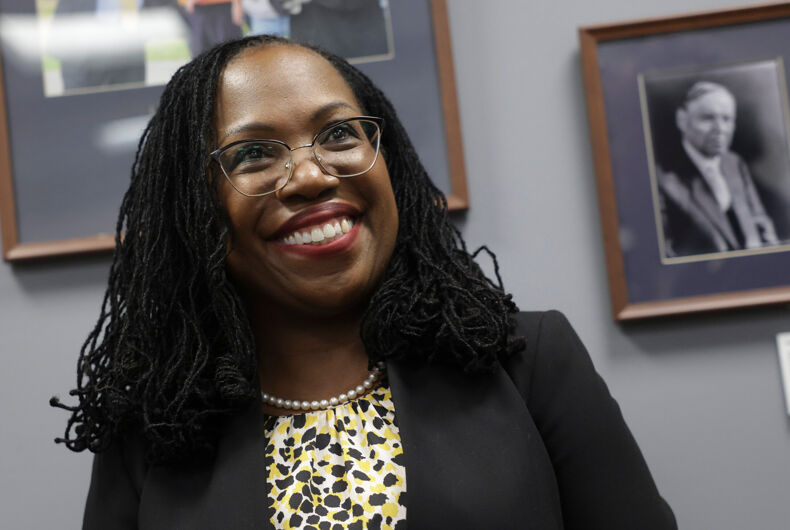 Judge Ketanji Brown Jackson has been confirmed by the Senate and will make history as the first Black woman on the Supreme Court.

Upon her nomination, a statement from the Biden administration called Jackson “one of the nation’s brightest legal minds.”

Kim Tignor, the executive director of She Will Rise, an organization launched in 2020 devoted to electing a Black woman to the Supreme Court, spoke on MSNBC today about the meaning of this moment.

“It’s joy, it’s relief. It is such a moment,” Tignor said. “When we launched in 2020, I will never forget when we started calling for the first Black woman Supreme Court justice…a lot of members of our own community were saying, well does this woman exist? And to that we decided to create a list of phenomenal Black women…What this day signals is that now and forever we will never be asked that question again. This woman exists.”

“LGBTQ rights are under attack all across this country, and today’s confirmation of Judge Ketanji Brown Jackson to the U.S. Supreme Court is a critical step to ensure our hard-won progress is not reversed by those using the courts to fight outdated culture wars,” said the organization’s president and CEO Sarah Kate Ellis.

“Judge Jackson’s experience and judicial temperament will make her one of the most qualified justices ever to serve on the Court. GLAAD congratulates Judge Jackson and our entire nation on this historic and long overdue representation.”

Since June 2021, Jackson has served on the U.S. Court of Appeals for the District of Columbia Circuit – which is often thought of as the country’s second-highest court due to its many high-profile cases. She was nominated for the seat by Biden, and three Republican senators also voted to confirm her there.

Before that, she served on D.C.’s federal district court, to which she was appointed by President Barack Obama. She has also worked as an assistant public defender and a private practice attorney. Jackson also clerked for out-going Supreme Court Justice Stephen Breyer, whose seat she is taking. Breyer has described her as “brilliant.”

As a D.C. judge, she is known for rulings on issues related to the power of federal agencies as well as executive power.

One of her best-known rulings came in the case of Committee on the Judiciary v. McGahn, in which she ruled that former Trump White House counsel Don McGahn must testify in front of the House Judiciary Committee.

Jackson wrote in her opinion, “The primary takeaway from the past 250 years of recorded American history is that presidents are not kings. They do not have subjects, bound by loyalty or blood, whose destiny they are entitled to control.” Her ruling was ultimately overturned by a conservative-majority appeals court.

Jackson is also an expert on federal sentencing. She was vice chair of the United States Sentencing Commission from 2010 to 2014. During that time, sentences were slashed for a significant number of federal drug offenses, and sentences were retroactively decreased for many crack cocaine offenses.

This experience, combined with her work as a public defender, makes her a welcome pick for advocates of criminal justice reform. She will be the first ever Supreme Court justice to have worked as a federal public defender.

Jackson was born in Washington D.C., but grew up in Florida. Both of her parents were teachers in public schools before her father became a lawyer and the chief attorney for the Miami-Dade County School Board and her mother became a school principal.

Jackson’s confirmation comes after a contentious confirmation hearing in which Republicans spent days grandstanding, asking bad faith questions, and ranting at Jackson, who was praised for staying cool and collected throughout it.

Conservatives say school lets furries “sit at the feet of their teacher & lick their paws, barking”