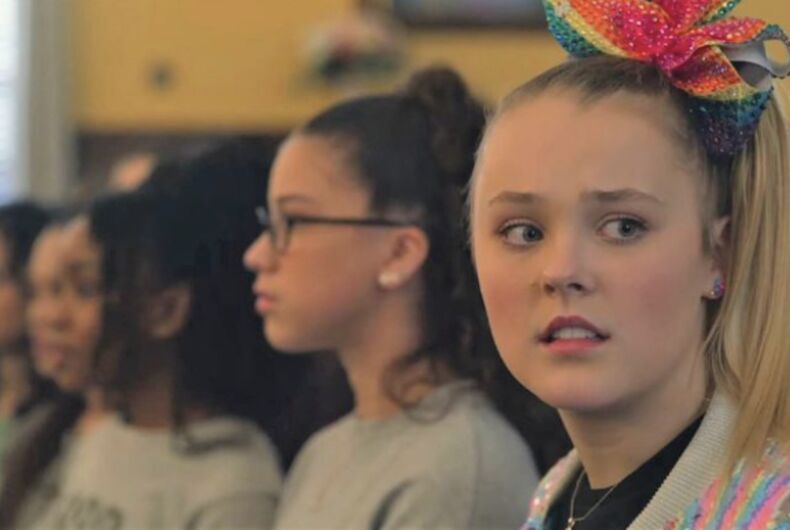 Out teen pop performer JoJo Siwa has said that Nickelodeon didn’t invite her to attend this year’s Nickelodeon Kids’ Choice Awards even though its organizers nominated her for an award and used her music during its ceremonies this weekend.

“A lot of you have been asking me why I’m not at the Nickelodeon Kids’ Choice Awards tonight, and the answer is very simple — I wasn’t invited,” Siwa said in an Instagram story.

Related: A fan asked JoJo Siwa to stay in the closet. What happened next was amazing.

In the caption of her video, she wrote, “I don’t want anyone to think it was my choice not to go.”

The exclusion was eyebrow-raising seeing as she was nominated at the show for Favorite Social Music Star (an honor won by Dixie D’Amelio). Siwa also said that the awards show played her song “One Chance”

“My song made the cut, but not me,” Siwa stated in a follow-up post.

Siwa, who came out in January 2021, appeared at last year’s Kids Choice Awards on March 13, 2021. At the time, she was nominated for Favorite Female Social Star.

She was also a frequent attendee of the award show in previous years. Several social media commenters questioned whether Nickelodeon chose not to invite her after Siwa had recently cut-off her trademark ponytail and announced her new relationship, though Siwa never mentioned the gender of her new relationship partner.

This isn’t the first time Siwa has publicly questioned her treatment by the kids’ entertainment network.

In September 2021, Siwa said that Nickelodeon wouldn’t let her perform the six original songs she recorded for the Paramount+ movie “The J Team” while on tour, even though Paramount+ and Nickelodeon are part of the same media company, ViacomCBS.

“These are MY songs, MY voice, MY writing. Does this seem fair???” she wrote in a series of since-deleted tweets, according to Billboard. “Working for a company as a real human being treated as only a brand is fun until it’s not.”

Three months after coming out, Siwa explained that she identifies as pansexual.

“That’s how I have always been my whole life is just like, my human is my human,” she told People magazine. “I never wanted [my coming out] to be a big deal.”

Despite her wish, her coming out was a big deal, primarily because she has such a large, young fan base. She sells out international arenas and has lots of branded merchandise selling at national retail stores.

As such, the 18-year-old performer remains one of the most influential and successful LGBTQ figures among young audiences, invite or no.

“Performing has always made me super happy,” she said after coming out. “But for the first time, personally, I am like, ‘Whoa, happiness. I am so proud to be me.'”