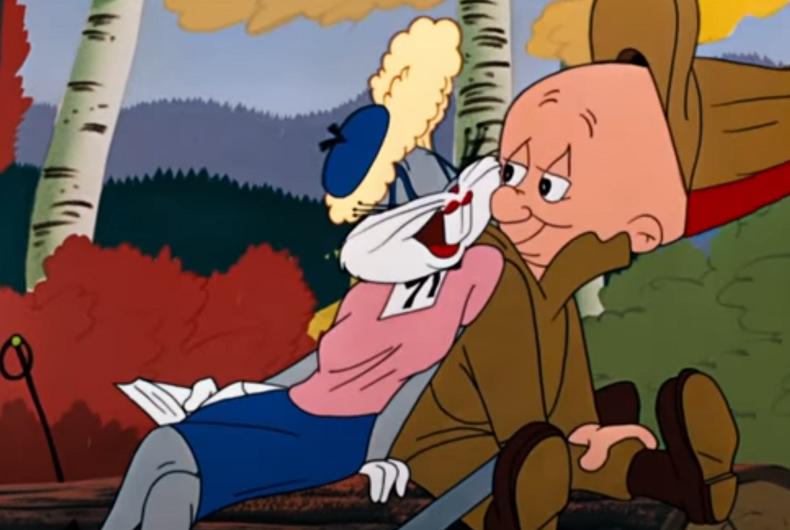 Florida Gov. Ron DeSantis (R) claimed that cartoons used to be completely wholesome, but now Disney has sexualized them to corrupt the youth. But people aren’t putting up with his poor memory and are showing that cartoons have always been a product of the society that they were produced in.

DeSantis was speaking at an event for Senate candidate Adam Laxalt when he started to rant about Disney. DeSantis has been in a very public battle against the megacorporation ever since they released a statement opposing his state’s Don’t Say Gay law, bringing up a leaked Zoom call among Disney executives where one noted that there are a lot of LGBTQ people, “so Disney better get with it.”

“One of the things that really bugged me were these Zoom videos with all these people that are high up at Disney, talking about how it was their intention to inject sexuality into the programming for these very young kids,” DeSantis said, distorting the content of the leaked video (only one executive was talking about increasing queer content, she was talking about sexual orientation and gender diversity and not discussions of sexuality in general, and she did not mention “very young kids”).

“And so my wife and I,” DeSantis shouted into the mic, “you know we’re thinking to ourselves, you know when we were young you could watch cartoons without having to worry. Now parents have to sit there and worry about what are they trying to inject in, what type of ideology are they trying to pursue. And that is wrong.”

While DeSantis apparently couldn’t remember a cartoon ever being sexual, problematic, or queer before 2022, people on Twitter did. And they brought a lot of examples to help jog his memory.

Bugs Bunny married a man in at least three cartoons in the 1950s. https://t.co/cYop9SmnYR pic.twitter.com/ygPpqMwPs1

bro bugs bunny literally shot and killed a man because he was coughing during his piano recital. and it was hilarious. it's gonna be ok https://t.co/UprqSthK8q pic.twitter.com/GgFWIYvS44

forget bugs bunny this guy was a serial rapist… but we all know Republicans have no problem with that because the important thing is he was straight 🤡 https://t.co/aQPfEF08Zd pic.twitter.com/Sm214FG0hx

tom and jerry literally tried to kill each other every episode https://t.co/PlzcrF6OCq

I’m sure he was just fine with Daffy Duck getting his bill shot off 50 different ways. https://t.co/0bJ0BexZko

we just had the same idiots fuming about having the girl m&ms not wear thigh highs https://t.co/YEu0EMHHKg

Seems like somebody has never jerked off to Betty Boop https://t.co/BJVTjbZ5yH

What's that? Can't hear you over the sound of this very non-sexual cartoon from your dad's childhood https://t.co/nUS3iaAWUS pic.twitter.com/Ttvd9bKEjI

In PLANE CRAZY, an old Mickey Mouse cartoon they play on repeat on Main Street at Disneyland, Mickey tries so hard to sexually assault Minnie she has to jump out of an airplane using her underwear as a parachute. https://t.co/wsPr75pgds

Bugs Bunny, Daffy Duck, and Pepe LePew cartoons featured bestiality, people (or ducks) getting shot in the face with a shotgun, and stalking / sexual assault.

But go off, "Governor." https://t.co/UdhHCphsCr

“When we were young, you could watch cartoons without having to worry…as long as you were white.” pic.twitter.com/LVG6iVLQJL

Yeah, those wholesome cartoons of our parents' youth. pic.twitter.com/5mZOwE1m1u

I was watching this as a kid pic.twitter.com/IvhTmCEYxa

A cartoon from my toddler days that my parents were fine with me watching. Hell, they watched it with me. pic.twitter.com/MdzNhVQqCU

When death seems easy by comparison