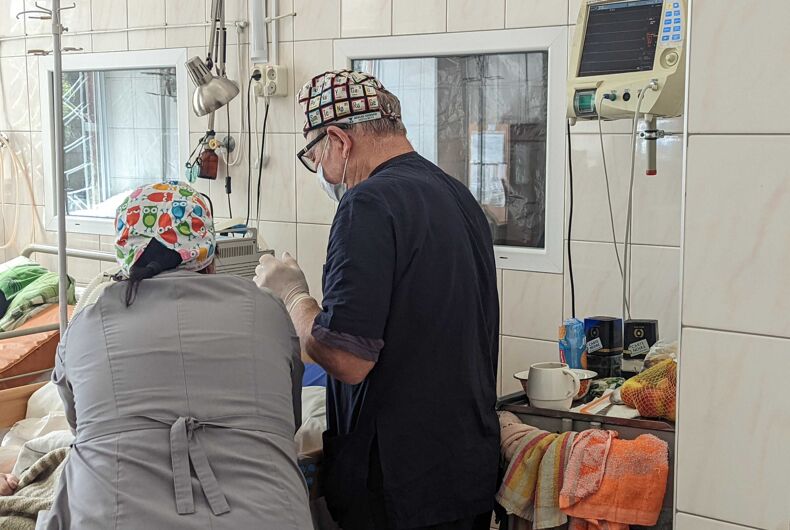 Patients are cared for at a Ukrainian hospital treating those wounded in Russia's invasionPhoto: Sarah Ashton-Cirillo

Upon leaving, death seemed easy by comparison. Walking up the steps of the nondescript building, its brick facade worn but well kept, the coming encounters weren’t planned.

During war not much is.

Related: Influential conservative activist claims schools are teaching kids how to be furries

Two small plaques on either side of the main entrance announced the prestigious location where my appointment was to be held. On the left, in English, the sign read “Institute of Neurology, Psychiatry, and Narcology of the National Academy of Medical Sciences of Ukraine.”

Ostensibly there to speak with the director, Mykola Posokhov, on matters related to mental health during the war, and more personally, the treatment of the Ukrainian transgender population, upon settling into his office and engaging in some brief introductions, a hospital volunteer came into his office to discuss the treatment options for a recently admitted soldier who was diagnosed with, among other ailments, as having “shell shock.”

As I sat and watched the exchange, the security services personnel I was with provided basic translation. It was just a few minutes into their exchange that Dr. Posokhov stood up and came around to the front of his desk.

Feeling it his duty to look into this patient further, he announced to the room that he needed to cut our meeting short. As he spent a few moments grabbing charts, the volunteer proposed that I join them. With that offer, my exclusive look inside a hospital operating on the frontlines of a horrific warzone began.

The interior hallways, dated but immaculately maintained, saw a mixture of civilians and military personnel lining the benches. Traversing the byzantine structure, we eventually found ourselves at the post-op center. Glancing over Dr. Poshokhov’s shoulder as he addressed the attending surgeon, he turned and waved me into the room; I was invited to take pictures as the surgical team worked on closing and dressing the head wound of an enlisted man wounded in a battle with Russians in the southeast region of Kharkiv Oblast.

Stunned by the access and grateful for their belief in my discretion, we proceeded to visit different hospital rooms to hear stories from the patients themselves.

One of the first noticeable differences between this hospital and others I’d been to previously, was that each room held between four and six beds. Other hospitals had to close due to attacks, or threats of attacks, on the facilities by Russian forces. Again, a recurring theme, despite the overcrowding, was the cleanliness and order that pervaded the aged facility.

My first personal encounter was with a former Ukrainian Army officer who re-enlisted in February despite multiple disc herniations that protruded into his spinal canal.

Thrown from a blast on his position by an incoming missile strike, he landed with such impact that feeling was lost in his extremities; he is now working on regaining full strength in his limbs.

I was introduced to an 88-year-old woman, who had been buried under rubble when the roof of her Kharkiv apartment collapsed under a barrage of artillery shelling. With no family, and no memory of the attack itself, the administrators of the institute decided to keep her as an inpatient rather than send her west, alone, as a refugee. She spent her days in a  blissful fog, occasionally asking why her nation was under attack.

A third patient willing to discuss their care had been brought in a week prior.

This soldier, an army medic, had been serving in the eastern occupied Donbas area for a year prior to the resumption of the full-scale invasion. 18 days before his scheduled rotation out of the hot zone, he was instead moved to the theatre which held the battles surrounding Luhansk.

After 14 straight months of action, he was injured. Additionally, he was also forced to endure a continued separation from his wife that had already lasted a year and was now going to be indefinite thanks to needed rehab for a neurological injury caused by an explosive blast on his unit’s position.

This young man, stoic in ruminating on his own prognosis, managed to be optimistic about the prospects for his nation, both in wartime and in the inevitable post-war reconstruction. He was truly unbowed.

Eventually, the tour wound down, and, accompanied by the long-suffering medic who spoke proficient English, our group returned to the Dr. Posokhov’s office.

The doctor didn’t have time for my original questions but made certain that I understood that while the wartime hostilities continued, he, the skilled staff, and the plethora of volunteers helping to keep operations running would find a way to serve their country’s healthcare needs, no matter the lengths necessary.

Driving away, my thoughts went toward my early days in Kharkiv when I had first encountered the dead of the city. As these victims of Russian war crimes were pulled from devastated buildings, they no longer spoke, and time moved too rapidly to learn their stories.

The many victims in the hospital were different. In speaking to them, I understood the true nature of war for the first time. It wasn’t the enemy fire forcing residents to cover for protection or the life and lifelessness in which the city bathes.

Ron DeSantis said cartoons used to be straight & wholesome. The internet reminded him of the truth.