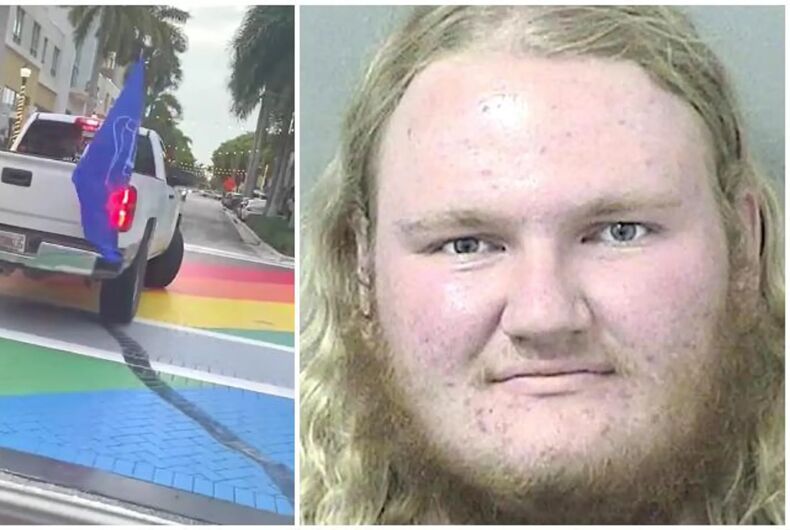 Alexander Jerich wept when his father told the judge where his son had gone wrong.Photo: Screenshot

A Trump-loving vandal who destroyed a rainbow street mural in Florida has been ordered to write a 25-page essay about the 2016 Pulse shooting, but that’s apparently not the worst punishment he faced. His father explained to the court all the reasons he’s disappointed in his son, making him cry.

Last July, Alexander Jerich, 20, of Delray Beach did a “burnout” on top of a rainbow intersection, leaving 15 feet of dark black skid marks on it and causing thousands of dollars of damage. The vandalism was part of Jerich’s celebration of Donald Trump’s birthday, and he flew a Trump flag from his truck when he did it.

Related: A church responds with love to anti-gay vandalism

This past Thursday, Jerich had his sentencing hearing after pleading guilty to criminal mischief and reckless driving this past March. Palm Beach County Judge Scott Suskauer was not impressed with Jerich’s behavior.

“I was expecting someone who displays complete disrespect for their fellow citizens,” Circuit Judge Scott Suskauer said. “A person some might call a thug or a redneck.”

Then Jerich’s father talked to the court about his son’s failures at school, how he has no friends, and how disappointed he is by his son’s behavior. According to the Palm Beach Post, Jerich hung his head and cried in court while his father talked.

He then apologized to the judge and said: “I’ve had problems in the past with fitting in. I was just trying to fit in and be accepted.” He didn’t explain how exactly the vandalism would help him fit in and be accepted, but he was participating in a 30-car Trump birthday celebration that day and perhaps he thought he could impress other Trump supporters.

His sentence has not yet been decided, but while the judge reviews the case, Jerich was ordered to write a 25-page essay about the Pulse nightclub shooting in Orlando, where a mass shooter left 49 people dead at the LGBTQ nightclub. The essay will have to include information about each of the victims and their families as well as to offer an explanation as to why tragedies like Pulse happen.

“I want your own brief summary of why people are so hateful and why people lash out against the gay community,” Judge Suskauer said.

The Palm Beach County Human Rights Council asked for a one-year jail sentence for Jerich, but the judge said that he doesn’t agree with that and is also considering dropping the felony criminal mischief charge.

“I don’t want to do that to a young man who has his whole life ahead of him,” the judge said, noting it can be hard to get a job with a felony conviction.

The Palm Beach County Human Rights Council president, Rand Hoch, told the court that neither they nor any of the organizations they have asked want Jerich to volunteer with them.

“It would be a great opportunity for him to learn,” Judge Suskauer said. “I don’t think he would do any harm.”

After the hearing, Hoch had some words for State Attorney Dave Aronberg, who refused to charge Jerich with a hate crime.

“Aronberg screwed up,” he said. “This is clearly a hate crime. It’s just not being prosecuted as such.”

Lesbian Jeopardy! contestant Mattea Roach is on a winning streak & she’s raking in the cash

5 LGBTQ rappers in the hip-hop industry