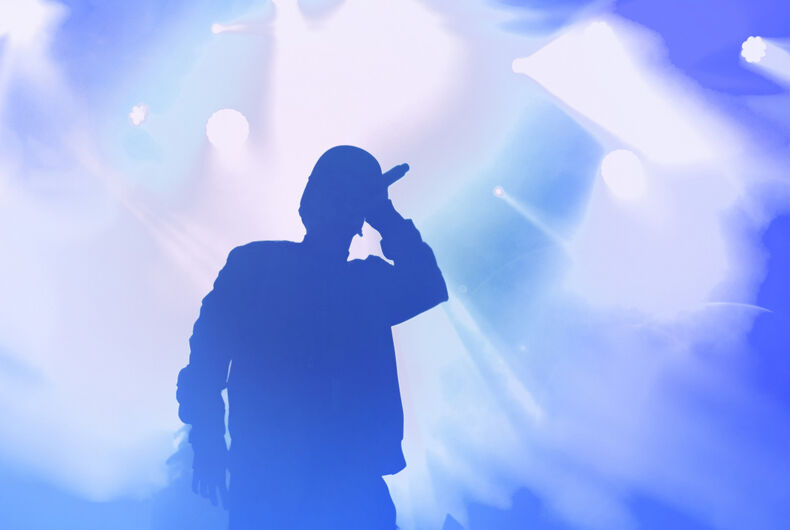 The history of hip-hop as a genre and culture has been unwelcoming to the LGBTQ community. While in other genres, gay singers like Elton John and Sam Smith have been pushed by labels, rappers that are gay are vastly outnumbered by their straight counterparts. They’ve had, with few exceptions, less access to industry support such as airplay and news coverage.

But a new wave of hip-hop artists has emerged to challenge these attitudes, potentially ushering in an era of mainstream LGBTQ representation and inclusivity in the world rap game. Keep reading for some of the top gay rappers in the industry.

Related: How a music video about a gay teen may have saved hundreds of lives

In a 2005 interview with SPIN, 50 Cent stated that homosexuality is taboo in hip-hop: “In hip-hop, there’s (sic) certain standards of things you can’t do. Being gay isn’t cool – it’s not what the music is based on. There’s always been conflict at the center of hip-hop, because it’s all about which guy has the competitive edge, and you can’t be that aggressive if you’re gay.”

With this mindset, it’s no wonder that homophobic language in hip-hop has been treated by so many rappers as an easy way to prove their masculinity. In many instances, hip-hop artists have defended their use of anti-gay language, claiming it as a generic insult.

Eminem, who infamously uses the slur “f*****t” in multiple songs, claimed in a Rolling Stone interview that he never equated the term with homosexuality, but “[i]t was more like calling someone a b**** or a punk or a******.”

LGBTQ Representation in the Rap Scene

Despite apparent resistance from the industry, LGBTQ artists have begun to flourish in hip-hop over the last decade. More artists are out and increasingly incorporating their gender identity into the lyrical and visual elements of their music. Here are some of the biggest LGBTQ hip-hop artists today.

Pop star Lil Nas X came out as gay during Pride Month in 2019 while his song “Old Town Road” was number one on the Billboard Hot 100, telling his fans “

efore this month ends, I want y’all to listen closely to c7osure” with a rainbow emoji.

His later releases embrace his sexuality and incorporate visuals that go against established gender norms. The music video for his song “Montero (Call Me By Your Name)” was both praised and criticized for its use of religious and queer symbolism, which included the fashion icon sliding down a stripper pole to hell and giving Satan a lap dance.

In “That’s What I Want”, the young artist sings about needing “a boy who can cuddle with me all night”, while the video on his YouTube channel portrays the rapper entering into a relationship with another man. The video includes scenes of the two having sex in a locker room and on a camping trip, as well as a scene involving their break-up after he discovers his partner has a life with a heterosexual family.

In 2020, the rapper received the GLAAD Outstanding Music Artist award for his debut extended play 7. In an interview with Variety magazine, the singer talked about representing the LGBTQ community, saying, “I hope my actions are enough to inspire other young LGBTQ children coming up to not be afraid to be themselves, but I feel pressure to be a role model for the community.”

One of the most well-known gay female rappers in America, Harlem-born Azealia Banks identifies with the bisexual label.

Her hip-hop debut single “211” went viral in 2011 and was named by Billboard as one of the 100 songs that defined the decade. It was followed by her first album release Broke With Expensive Taste, with the 2014 album garnering glowing reviews from multiple publications such as Pitchfork and Rolling Stone. Banks also went on to start her own independent record label, Chaos & Glory Recordings.

While she made it clear when she came out that she was “not trying to be, like, the bisexual, lesbian rapper” as she did not “live on other people’s terms”, she did not shy away from expressing her sexual orientation in her art. In “Movin’ On Up”, the artist raps, “All I want is to live in this world, express the love that may live in me, learn myself more, and be free to explore my sexuality.”

The young rapper’s art has often been overshadowed by controversy in her personal life, as Banks has been involved in Internet feuds with various music industry celebrities. Still, Banks’ outspokenness online goes both ways, as the bisexual artist has also used her platform to call out transphobia and homophobia.

Cakes da Killa, born Rashard Bradshaw, began rapping in high school, “making fun of straight people in the cafeteria.” Since then, the artist has released an album called Hedonism, as well as several extended plays and mixtapes characterized by quickfire rap, aggression, and unabashed gay eroticism.

The artist’s name contains a nod to gay slang, as he noted, “[i]n the gay community, your backside is called your cakes, and I have a lot of that… [w]hen I think about cake, I think sweet, campy and edible, which is one side of me.”

Transgender musician Mykki Blanco has collaborated with some of the most famous men and women in the industry, including Madonna and Kanye West. The artist has spoken out against allegedly homophobic treatment after being arrested in Portugal and posted in solidarity with Russia’s LGBTQ community after news of a police raid on a Moscow venue where Blanco was scheduled to perform.

In Pride Month of 2015, Blanco revealed to the public that they had been HIV-positive since 2011 and for their entire career. The rapper originally feared that they would have to leave the industry after sharing their diagnosis but continued to release music following an outpouring of support.

In the MV for Madonna’s “Dark Ballet”, Blanco appeared as Joan of Arc and ended the song with the powerful statement, “I have walked this earth, black, queer, and HIV positive, but no transgression against me has been as powerful as the hope I hold within.”

Though he never explicitly identified with a gay or bisexual label, singer and rapper Frank Ocean made breaking news after he posted a letter on Tumblr in 2012 talking about his “first love” with another boy that the rapper met early in his life. In it, Ocean detailed how he confessed his feelings and was rejected. The letter was named as an influence by many other LGBTQ artists, including Lil Nas X and Corpus Christi native Kevin Abstract.

Shortly after, the singer released his first album Channel Orange. Much of the work in the album had Ocean singing about a male love interest, such as the line “I can never make him love me” in the song “Bad Religion”, or Ocean crooning about the “so buff and so strong” Forrest Gump running in his mind. The album won the Best Urban Contemporary Award at the 2013 Grammy Awards.

The Future For LGBTQ Artists in Hip-Hop

While there’s still a long way to go before LGBTQ discrimination in the hip-hop genre becomes old news, the rise of queer rappers is a sign that the rap music industry is beginning to break away from these views. As more music fans embrace gender representation and diversity, queer artists have gone from niche acts under a separate queer label to chart-topping mainstream musicians.

Lil Nas X, Banks, Cakes, Blanco, and Ocean, are just a few examples of LGBTQ representation in hip-hop. With the movement toward inclusivity in the world hip-hop scene, we can hopefully look forward to more lesbian and gay rappers in 2022.

Is WNBA star Brittney Griner a prisoner of war?