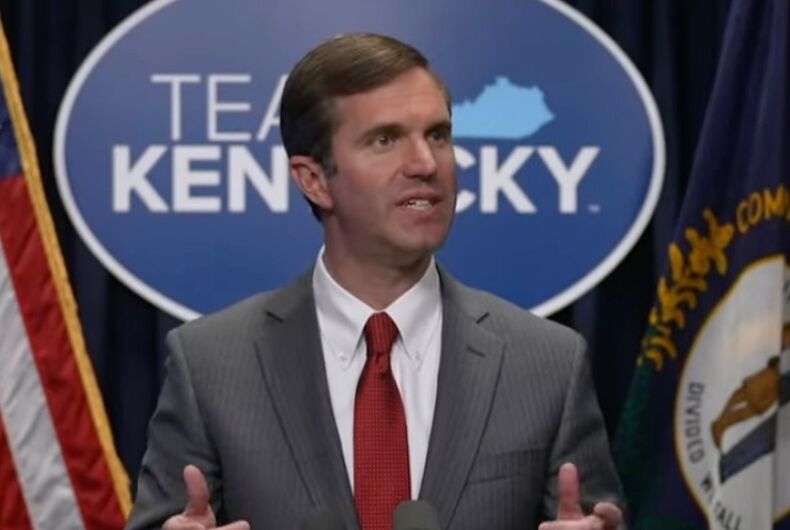 Kentucky Gov. Andy Beshear (D) has vetoed an anti-trans sports bill that would make it illegal for trans girls in 6th grade through college to participate on women’s school sports teams.

In his veto letter, Beshear pointed out that the Kentucky High School Athletic Association already has guidelines for the participation of transgender athletes.

He added that similar to the reasons cited by the governor of Utah, who recently vetoed a similar bill, he is concerned about the challenges trans people face.

“Senate Bill 83 most likely violates the equal protection rights afforded by the United States Constitution because it discriminates against transgender children seeking to participate in girls’ or women’s sports without presenting a single instance in Kentucky of a child gaining a competitive as a result of sex reassignment.”

Beshear also said that trans youth “deserve public officials’ efforts to demonstrate that they are valued members of our communities through compassion, kindness and empathy, even if not understanding.”

Chris Hartman, director of Kentucky LGBTQ advocacy organization the Fairness Campaign, praised Gov. Beshear’s decision and said there is only one out trans girl they know of playing sports in Kentucky’s entire school system. Hartman accused the legislature of using their power “to bully this student and others like her.”

“I applaud Governor Beshear for doing the right thing today and vetoing a harmful piece of legislation that would deprive transgender girls and young women of the opportunity to grow and learn from being on a team, simply because of who they are. From the start, this bill has been more about fear than fairness… While we are pleased with the governor’s actions today, the rights of transgender people in Kentucky are still in danger. We urge state lawmakers to follow the lead of Governor Beshear and show compassion to transgender people in our commonwealth by not overriding this veto.”

In mid-April, the legislature will vote on whether to override the veto.