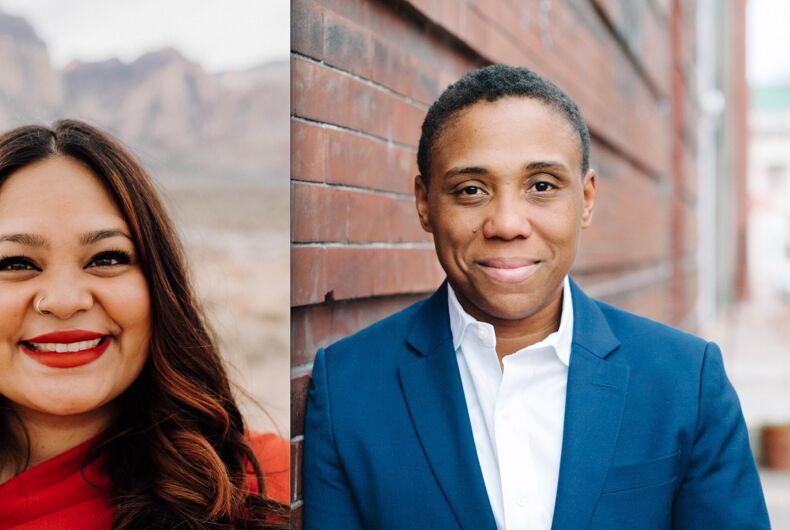 Emily’s List, an organization working to elect Democratic pro-choice women, will soon announce the winner of its 2022 Gabrielle Giffords Rising Star Award – and two trailblazing LGBTQ politicians are among the nominees.

Out North Carolina Rep. Vernetta Alston and out Nevada Rep. Cecelia González have both been recognized by the organization as potential winners of the award, which focuses on honoring politicians at the state and local levels.

“We know that state and local office is where decisions are made that impact people every day,” Yari Aquino, Emily’s List Deputy Director of Campaign Communications, told LGBTQ Nation.

“From our access to abortion, affordable housing, to criminal justice reform – big change happens at the local level… We hope that this award raises awareness for their incredible contributions and motivates people to take action to support their own local candidates.”

Aquino added that Reps. González and Alston were nominated “because of their inspiring commitment to advocating for those too often silenced by those in power.”

Alston was the first out LGBTQ woman of color elected to North Carolina’s general assembly.

In a statement, Emily’s List president Laphonza Butler called her “a bold and inspiring leader who is committed to bettering the lives of her constituents.”

“While in office, Rep. Alston has secured funds to install air conditioning in all North Carolina prison housing units, as well as introduced legislation that included funding for North Carolina’s HBCUs, raises for teachers, the expansion of child care tax deductions, and the separation of juvenile justice and adult correction divisions,” Butler said.

I know North Carolina stands for LGBTQ inclusion. More fundamentally, I know we believe in respect for human dignity and standing up for people when they are judged or hurt. This is not a partisan principle or belief.

Alston told LGBTQ Nation that being nominated “is motivating” and that she hopes “it’s encouraging to the growing cohort of LGBTQ people serving in elected office.”

“Despite serving in the minority, this nomination affirms that my voice and the policies I support are what our communities want from their elected representatives,” she said.

Alston said that among the work she is most proud are her efforts with North Carolina Gov. Roy Cooper (D) to recognize a statewide Gender Expansive Parents’ Day.

“There are countless parents in North Carolina with diverse gender identities or expressions who deserve to experience community. It is my hope that celebrating gender expansive parents will invite everyone to recognize all supportive parenting relationships.”

Emily’s List president Butler also praised González’s nomination, saying she “has dedicated her career to creating a more just Nevada, and in office, has been a vocal advocate for reproductive freedom, criminal justice reform, raising the minimum wage, and domestic violence awareness.”

“From her years in college where she created a hotline for domestic abuse and stalking victims, to her commitment to advocating against unjust policies and calling for prison reform while in office – González has proven to be a fierce champion for the people of Nevada and a leader centering empathy in every decision. ”

González told LGBTQ Nation that it means a lot for an LGBTQ person like her to be nominated for this award.

“We know that representation matters, but it is more than just representation. It means that we are being seen by society, that we matter, and that our issues in our community matter, too.”

Being biracial is a complex & complicated identity way too long for twitter, but, do I love being Latina & Asian! Twice the rice. Twice the spice. Twice the culture. Twice the community. Twice the family. Twice the love. 🇹🇭🇲🇽 #Thai #Mexican #Asian #Latina #Proud pic.twitter.com/6QEU8a4EHE

All nominees for the award will also speak on a panel at Emily’s List’s May 3 conference, and González said she is so excited to be part of it. She hopes to express how much work is left to be done and that “we cannot do this work alone.”

“We need people to get involved and take action on the issues that they care about. There is room and space for everyone to get active. I also want people to know that restorative justice is part of my work and should be part of everyone’s work. We can heal our communities together and move forward together.”

The winner of the Rising Star Award is selected by public vote and will be announced this week. Past winners and nominees include Stacey Abrams, out Oregon gubernatorial candidate Tina Kotek, and out Georgia Rep. Park Cannon.