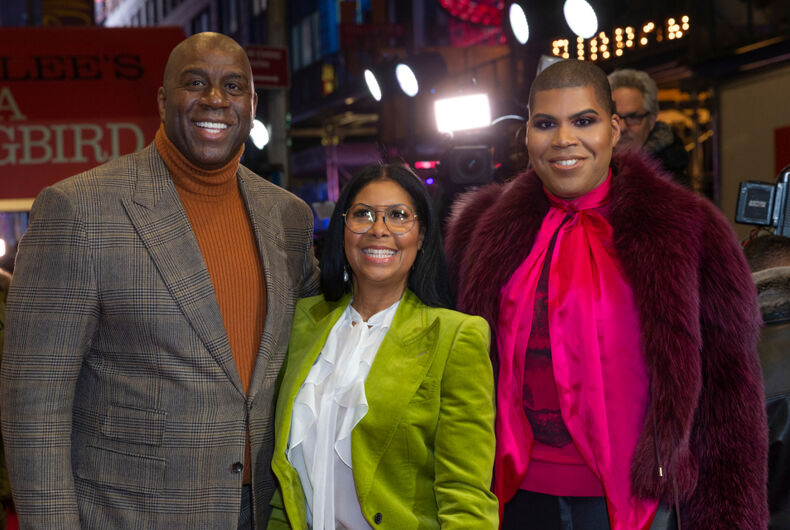 In a recent interview, basketball legend Magic Johnson spoke candidly about the challenges he experienced accepting his gay son, EJ Johnson, when he first came out.

“When you grow up in team sports, you’re thinking, ‘Is he gonna play sports?’” Magic told Variety in a joint conversation with EJ. “And then when I saw that he liked dolls and to play dress-up … ‘What are you doing?’”

EJ said his parents were the last people he came out to and that for his dad, “it was just a lot for him to swallow in that conversation. A lot of just going back and forth. And he was just rattling off about things that weren’t particularly nice.”

EJ, who is now 29 and plays the voice of Michael Collins on The Proud Family: Louder and Prouder, said his dad started implementing “stupid rules” like banning him from wearing scarves in the house. “But it’s really not about scarves; it’s really about him seeing you be you.”

But after EJ left home to attend NYU, Magic saw the light.

“I had only been gone for two months,” EJ said. “He picked me up at my dorm and I was like, ‘Oh, whatever, hey.’ And he hugged me so hard. He was, like, squeezing all the air out of me. That’s when I knew, there’s nothing but love here.”

Johnson said that EJ “changed me.”

“He was so proud. This dude here is just so proud of who he is… I had to accept who he was and who he wanted to be. He actually helped me get there. Because he was so proud.”

EJ came out to the public in 2013. Despite Magic’s initial challenges, he has been a vocal supporter of EJ.

In 2017, Magic spoke with Ellen DeGeneres about EJ’s coming out, saying that he was “so happy” for EJ when it happened.

“We love him. EJ is amazing. So you got to support your child, because there are so many people who try to discriminate against them, so they need you to support them. Because if you don’t support them, who is going to support them? And love them?”

EJ’s mom, Cookie, also spoke with Variety about the effects their family’s public acceptance of EJ – along with their outspokenness about Magic’s HIV diagnosis – has had.

“I remember a young man came up and said to me one day, ‘I really want to thank you and your husband for what you’re doing. I’m gay, but I didn’t want to tell my parents. When I went away to college, I got [HIV]. But with you guys talking about this, bringing it to everyone’s attention, it’s made me feel I’m gonna be okay, and I’m going to fight harder.’”