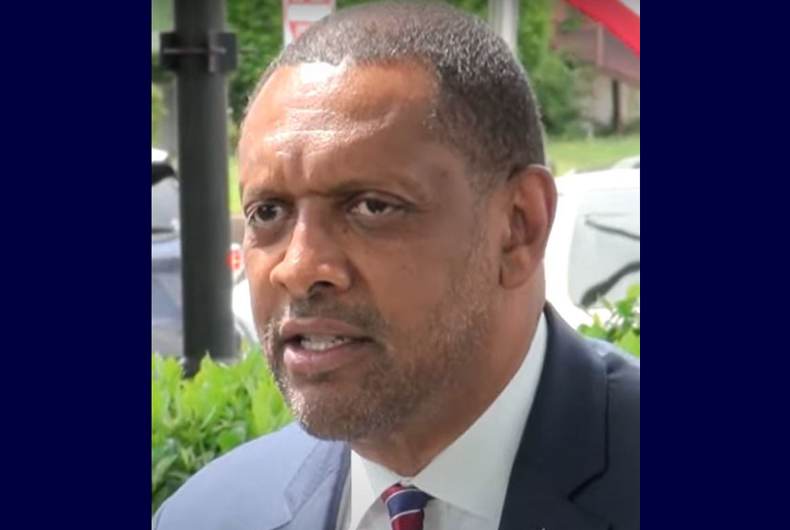 A Republican congressional candidate is saying that he opposes LGBTQ rights because, unlike race, sexual orientation and gender identity can be changed on a whim and therefore are “a choice.”

“I don’t know what you are unless you tell me what you are, if you’re gay,” Vernon Jones, who is running for Congress in Georgia’s 10th District, told Steve Bannon on the far-right War Room podcast. “But when I walk in that room, you can tell that I’m Black. I’m Black from cradle to grave, let’s not get that confused.”

Related: Steve Bannon defends Russia because “they don’t have the Pride flags”

He contrasted that to being gay: “They can actually change.”

“You can go from being straight, to being gay, to being transgender and all these other genders,” Jones continued. “But when you Black, I don’t have a choice.”

Later he claimed that LGBTQ people have never faced oppression: “When did gays come over in ships?”

This isn’t the first time Jones has said that LGBTQ people don’t deserve equal rights because they can change gender identities and sexual orientations.

Two years ago, when he was a Democratic member of the Georgia House of Representatives, he was confronted by Doraville City Councilwoman Stephe Koontz for his support of anti-immigration legislation. Koontz is transgender, and instead of talking about immigration Jones ranted “about how LGBTQ rights are not civil rights.”

“You might be a man one day and a woman the next, I don’t even know who you are,” Jones allegedly said, according to Koontz. Jones later told the Atlanta Constitution-Journal that his “recollection of the conversation is different” but did not explain further. Despite his denials at the time, he said pretty much the same thing two years later on a recorded podcast.

After serving several terms in the Georgia House, he publicly announced that he was a Republican in 2021 when his last term ended.

Jones said earlier this year that, if elected to Congress, he would start articles of impeachment against both President Joe Biden and Vice President Kamala Harris for “betrayal of public trust.”

He also promised to “cast my vote for President Trump to be Speaker [of the House of Representatives] and invite my colleagues to join me.” Donald Trump is not a member of the House.

Some conservatives are now saying all male teachers are predators