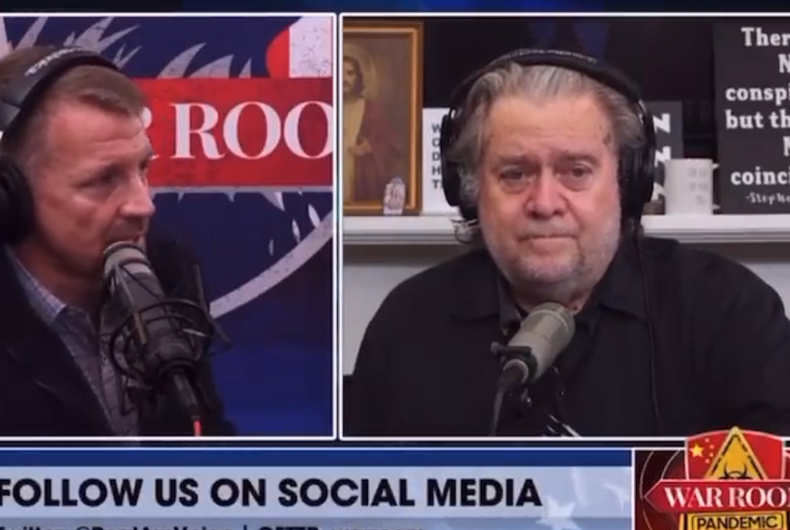 Former Donald Trump advisor Steve Bannon argued that the U.S. should be supporting Russia as it invades Ukraine because Russia is more homophobic and transphobic than the U.S.

“Putin ain’t woke,” Bannon said on his podcast War Room while talking with military contractor Eric Prince. “He is anti-woke.”

“The Russians [sic] people still know which bathroom to use,” Prince replied.

“They know how many- how many genders are there in Russia?” Bannon asked.

“Two,” Prince said, nodding as he was pleased with himself even though there are non-binary people in Russia.

“How backward. How embarrassing. How savage. How medieval,” Bannon said sarcastically.

Steve Bannon and Erik Prince say we should be supporting Russia because Putin is anti-woke and has no tolerance for LGBTQ. pic.twitter.com/qzHl2TkwxJ

Russian strong man Vladimir Putin invaded the democratic and sovereign nation of Ukraine this week. Ukraine is a U.S. ally and part of NATO’s enhanced opportunity partner interoperability program, and Ukrainian President Volodymyr Zelensky has made clear his intentions for NATO membership in the future.

President Joe Biden has been rallying world leaders to come to the defense of Ukraine, but many Republicans in the U.S. have sided with Russia, arguing that its invasion is either justified or that Russian culture is superior to American culture.

Donald Trump called Putin “genius” for invading Ukraine. Fox News host Tucker Carlson has repeatedly defended Russia’s desire to annex Ukraine, so much that he is getting praised in Russian state media.

Madison Cawthorn demands Republicans be made a protected class, but not LGBTQ people

Zaya Wade & Amy Schneider open up about being trans icons