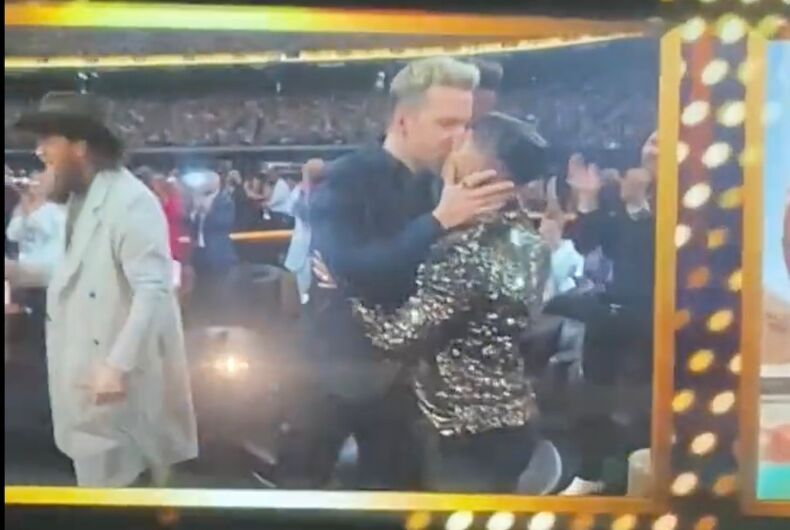 Country Star T.J. Osborne kissed his boyfriend at the Academy of Country Music Awards in Las Vegas when he learned that his band, the Brothers Osborne, won Duo of the Year.

One half of the Brothers Osborne, the country music star came out last February and instantly became the highest-profile out performer in the genre.

Related: Why we need to retire the term “gold star lesbian” for good

Tuned into the @ACMawards just in time for the gay kiss pic.twitter.com/vLe6HBb8DG

“I’m very comfortable being gay,” he told Time. “I find myself being guarded for not wanting to talk about something that I personally don’t have a problem with. That feels so strange.”

But the country music industry has long been known for its conservative fan base, and as such, it still has a long way to go in its acceptance of LGBTQ people.

As such, Osborne’s public display of affection is no small moment.

He not only shirked all of the hate by kissing is boyfriend at the awards ceremony, but he also shouted him out directly in his acceptance speech.

“Abi, I love you,” Osborne said, before yelling to the crowd, “Here’s to a great night in Vegas, baby. Come on.”

These two make quite the pair! Congratulations to @brothersosborne on winning ACM Duo of the Year at this year's #ACMawards! pic.twitter.com/tm1VkExxYQ

Last year, Osborne also made waves for kissing Ventura after winning a Country Music Award, marking a first for the longstanding award show.

But Tennessee Republicans also blocked a resolution to honor the singer earlier that year, motivated by homophobia. State Rep. Jeremy Faison, chair of the House Republican Caucus, rejected the measure despite unanimous passage in the Republican-controlled state senate.