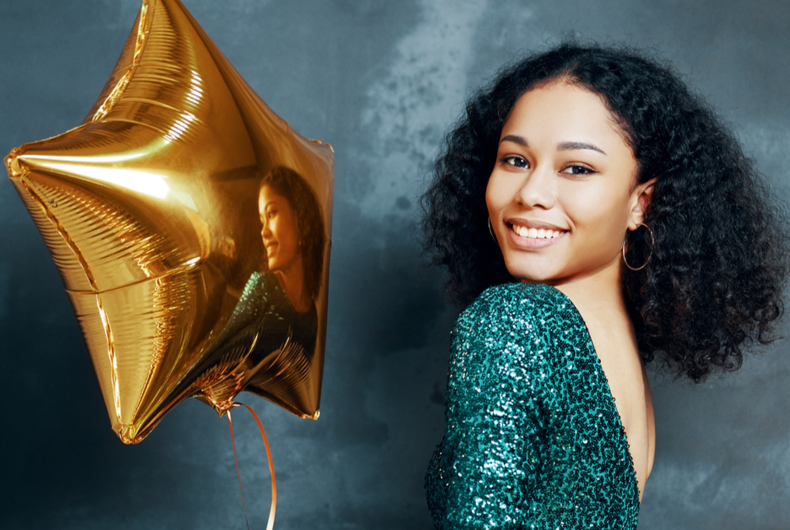 A “gold star lesbian” is a lesbian who has never had sex with a man. Essentially, it’s the lesbian equivalent of the “gold star gay.”

So what’s the problem? Why doesn’t the concept of the gold star lesbian fit into 2022? Let’s find out.

4 Reasons Why the ‘Gold Star Lesbian’ Is Problematic

The term gold star lesbian is well documented in lesbian pop culture. There’s even an episode on the lesbian drama The L Word called “Lone Star”, where the main characters dig into the meaning of the term and whether they’re qualified to take on the label.

But not all queer women have been happy with the term, especially trans lesbians and bi women who feel like all the meaning and expectations attached to the word can be exclusionary to people like them.

Here, we highlight four ways the term can alienate other women and non-binary lesbians from the lesbian community:

The Term Is Biphobic

For bisexual women, dating other women, particularly lesbians, can often feel like a constant exercise in proving one’s sexual “purity” and fidelity.

Bisexual women aren’t taken seriously in the lesbian community. Oftentimes, they tend to be pigeonholed into certain harmful stereotypes – that perhaps they’re only interested in dating women because they’ve had their hearts broken by men, they’ll eventually leave their partners for men out of a desire to settle down and have a “conventional family”, or they’re fluid just for the attention.

The idea of the “gold star lesbian” only pushes bisexual women to the fringes of the community. It feeds the narrative that, if you’re not 100% into women or have had experiences with men before, your intentions aren’t as “pure.” Or worse, that you are less desirable for having “played for the other team.”

It Can Encourage Gatekeeping in the Community

To some queer women, the gold star lesbian meaning is “someone who has never even interacted with a penis”. As such, the term can and has been used as a vehicle to alienate and exclude non-cisgender women, like trans lesbians and non-binary people, as well as women who have slept with or had relationships with them, from the lesbian community.

Remember, sex, gender identity, and sexual orientation are all completely separate pieces of our identities. One can have been assigned male at birth, identify as a woman, and still be sexually attracted to other women. Assigned-female at birth (AFAB) non-binary people, on the other hand, can still feel deeply connected to their femininity while still feeling like they don’t fit into the binary genders, and they can identify as non-binary lesbians regardless.

Unfortunately, the term “gold star lesbian” creates an expectation of what a lesbian should look like and how they should act, and it excludes anyone who isn’t cisgender or even anyone who may have explored their sexuality in the past but now identifies as a lesbian. It can lead trans and non-binary lesbians to even question whether they can or cannot call themselves lesbians, bringing into question who gets to even decide that in the first place.

But at the end of the day, “gold star” status can’t justify transphobia and vice versa. Trans women are women, so if they’re attracted to other women and identify as lesbians, then that makes them a lesbian – no ifs, ands, or buts.

Compulsory heterosexuality, or comphet, describes the idea that heterosexuality – along with all the expectations that come with being heterosexual – is imposed upon us by the heteropatriarchal culture that we’re born into. Signs that you may be experiencing comphet include holding men to impossibly high standards, feeling “trapped” in unhappy relationships with men, and merely tolerating sex with male partners.

So what does this all mean? Young women who experience comphet tend to assume that being straight is the norm. For young lesbians or queer women who start to realize that their sexuality may not fit into the so-called “norm”, comphet can make them wrestle with a lot of guilt, shame, and feelings of being “broken”. And so, some women may force themselves to fit in by dating and sleeping with men.

What the concept of the “gold star lesbian” does is that it can make a lot of women feel ashamed of their past relationships with men, making them feel like they’re “not lesbian enough” for having tried to date and have a life with a man.

The idea of the “gold star lesbian” completely ignores this underlying problem of compulsory heterosexuality. It also ignores the reality of queer people who wrestled with self-love and self-acceptance in a world that makes one feel like they’re wrong for loving who they love.

It’s Insensitive to Victims of Assault

For some women, their previous sexual encounters with men were beyond their control. When we place too much value on the idea of the “gold star” lesbian, we further alienate sexual assault and rape survivors.

By continuing to use the term, we assign moral value to maintaining one’s sexual purity – at least, in the sense of one’s sexual experiences with men. In simpler terms, perpetuating this idea that gold star lesbians are the gold standard creates a hierarchy and puts victims of assault at the lowest tier.

Is It Okay to Label Yourself As a Gold Star Lesbian?

If you want to define yourself as a gold star lesbian, there really isn’t anything holding you back. But, you have to bear in mind that you cannot attach moral value or measure the validity of one’s lesbian-ness based on who they’ve slept with in the past. After all, your sexual orientation is defined by you and you alone – not external factors or prejudice, and definitely not another woman’s or man’s opinion of you.

Throughout history, cisgender, heterosexual men have tried to define and control women’s sexuality all for the sake of maintaining dominance. Lesbians essentially subvert everything that men want from women, and so they’ve been vilified all through history.

Whether the concept of the “gold star lesbian” exists as a way for lesbians to take pride in the fact that they firmly refused to give in to compulsory heterosexuality is up for debate. Nevertheless, it shouldn’t be a reason to make trans and non-binary lesbians, as well as bisexuals, feel less than for simply being who they are.

At the end of the day, the concept of the “gold star lesbian” is more than just outdated in 2022 – it also reinforces negative stereotypes about queer people, excludes other lesbians and queer women, minimizes the struggle of dealing with comphet, and alienates victims of sexual assault. So, yes, it’s time to retire the term “gold star” for good.