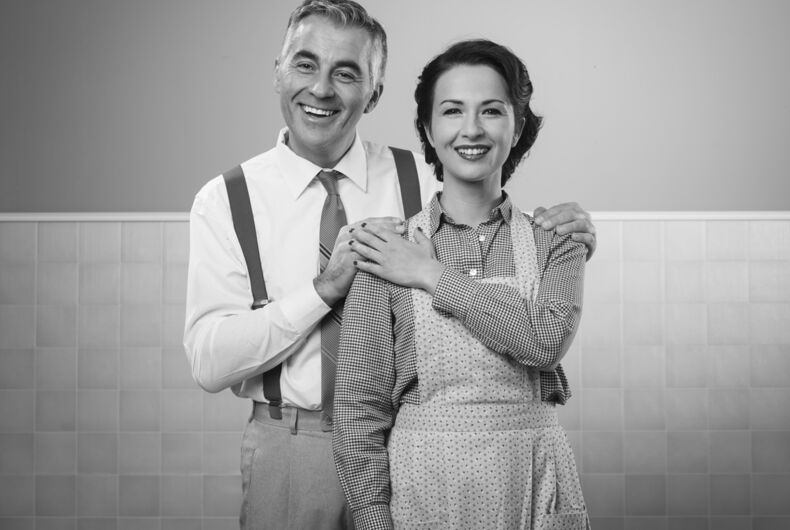 Have you dated the opposite gender and realized you weren’t that into them? Do you wish your boyfriend was more like your female friends? Why do you have a list of impossible standards for guys to meet before you’ll even consider dating them – but the idea of being with them makes you uncomfortable, anyway?

Are you just picky? Or were you just conditioned to interpret any kind of feeling towards men as attraction? If it’s the latter, it’s time to learn about compulsory heterosexuality.

Related: Lesbian sues the military after she was told to wear makeup & grow long hair

No, it isn’t a romantic or sexual orientation. Rather, it’s a system that forces queer people to conform to the expectations of heterosexual, cisnormative society and pursue heterosexual relationships. And while the term isn’t without its issues, understanding comphet has helped queer people explore their identities and validate their attraction to others.

What Is Compulsory Heterosexuality?

Compulsory heterosexuality, also known colloquially as “comphet,” is a theory that heterosexuality is forced upon women by the patriarchy. It assumes a woman is straight, prefers only men, and caters to their desires. Heterosexual relationships are seen as universally desired with the pinnacle often being a cis man and woman getting married.

Comphet is the voice that tells a woman to look ultra-feminine in order to date boys. It’s the voice that says the nerves she feels when she talks to a guy are romantic attraction (because they can’t just be friends). It’s thinking she’d like to go out or have sex with a woman but still saying she’s straight. It’s dating someone of the opposite gender just to pass as straight by saying she has a boyfriend or seeing women and still feeling “wrong.” It conflates identity and behavior as one and the same when they aren’t.

Why Do We Need to Know About It?

Why is it important to understand compulsory heterosexuality and its impact on gender and identity? Because it is harmful to queer, trans, and non-binary folk. It forces them to suppress their feelings to avoid discrimination and adopt the safety of “straight privilege.”

It impacts how women connect to their femininity and to others like them – platonically or otherwise. It frames a woman’s existence through a patriarchal lens. Comphet – and by extension, heteronormativity – prevents queer people from embracing who they are.

The History Of Compulsory Heterosexuality

Although recent conversation was sparked by the resurgence of Angeli Luiz’s viral Google Doc “Am I A Lesbian?” (originally published on Tumblr in 2018), the phrase “compulsory heterosexuality” was first popularized in 1980 by feminist lesbian author Adrienne Rich in “Compulsory Heterosexuality and Lesbian Existence.”

Rich asserted that compulsory heterosexuality erases lesbianism in particular because institutionalized patriarchy defines femininity in relation to men, operating as a system of oppression that is legally and socially enforced. She proposed that a woman’s own sexuality existed along a “lesbian continuum” and that connecting with women was more fulfilling than being with men.

She wrote: “Women have married because it was necessary, in order to survive […] We may faithfully or ambivalently have obeyed the institution, but our feelings – and our sensuality – have not been tamed or contained within it.”

How Comphet’s Meaning Changed In 2018

Luiz’s work, meanwhile, acts as a guide on how to divorce learned, performative straightness from one’s true identity. While the ‘masterdoc’ doesn’t reference Rich outright, it includes and defines comphet as “what forces lesbians to struggle through learning the difference between what you’ve been taught you want (being with men) and what you ​do want (being with women).” It goes on to list a rundown of scenarios to help the reader figure out if they’re gay or somewhere else along the sapphic spectrum.

In a lot of ways, Luiz’s document was a necessary update of Rich’s of trans-exclusionary feminism as it states, “You can still be a lesbian if you’re a trans woman/nonbinary too if you feel connected to womanhood through your love of other women.” With this reframing and reexamination of Rich’s argument through a modern lens, young people on social media can engage with more inclusive queer theory.

Essentially, yes, although opinion in queer circles on social media is divided on whether comphet is for lesbians only. But others in the LGBTQIA+ community, particularly those who align with femininity, are gender non-conforming, or non-binary have expressed they can relate to grappling with heteronormative expectations. Bi, pan, and aspec people especially have struggled with their identity falling outside straight societal norms.

In a world where being heterosexual is the perceived default, if a queer person is open about their sexuality and/or gender outside the acceptable binary, they still risk violence, ostracization, economic disenfranchisement, and more – especially if they’re queer or trans people of color (QTPOC) – because comphet is baked into institutions that benefit cis men. It can feel safer to hide behind straightness rather than question your relationship to it. The societal pressures on anyone in the queer community to “act straight” for their own safety can’t be denied.

But language changes meaning over time. 40 years have passed between Rich and Luiz publishing their analyses of heterosexuality and its impact on the queer community. What we understand as comphet today might not match exactly how it was defined in 1980 or even 2018.

First coined by queer literary critic and social theorist Michael Werner, heteronormativity has its roots in Rich’s concept of compulsory heterosexuality. It assumes the gender binary system applies to everyone, asserting that romantic and sexual relationships should be between two members of the opposite sex and that everyone is straight and cis.

Nowadays, comphet and heteronormativity are often used interchangeably in the queer community. The two are very closely related so it isn’t surprising that they seem to represent the same idea! Both concepts describe the belief that heterosexuality is the “normal” and only acceptable sexuality. Both are systems that exclude people who don’t align with straight cisness and target gender identity and expression.

A heteronormative world views queer people as “other” and makes it difficult for them to accept or even consider that they’re queer at all. (For example, a bisexual person in passing relationships may be told they’re “not really” bi.) Meanwhile, comphet also theorizes that heterosexuality isn’t necessarily a woman’s natural instinct but an institution wielded by the patriarchy to oppress them.

So many lesbians on social media have shared their experiences of thinking they were bisexual only to later realize it was the comphet talking. They dated men, had sex with them, all while questioning whether they’re actually heterosexual, queer, or just straight-up gay.

It isn’t about being attracted to men but rather the behavior of being conditioned to like men and trying to fit a man’s idea of femininity. That’s where the “compulsory” part of “compulsory heterosexuality” comes in. It’s reactive, going with the status quo, and not examining whether certain choices you make are ones you even want – attraction has nothing to do with it.

Is There A Comphet Quiz?

You don’t need to take a test to figure out if you’ve experienced or internalized comphet. But you can check in with yourself and learn to recognize the signs. A few questions to ask:

Angeli Luiz’s “masterdoc” has a comprehensive self-assessment you can check out, too!

When you look at heterosexuality as a political institution meant to disempower queer people, it may feel impossible to overcome. If straight culture is so pervasive in daily life, how do we point it out, draw our boundaries, and push back?

Lesbian author and advice columnist Anna Pulley said it best: “If you keep (gently) questioning, keep checking in with yourself and your feelings, and keep assessing whether the company you keep or throw out of bed deserves your time and energy and respect, then you’re not being compulsory about your choices, regardless of how heteronormative our society is and remains.”

In other words? Don’t deny what you know to be your truth.

Related: How lesbianism was turned into a problem, a century ago

An antivaxxer shouted slurs at a teenager outside of school. She’s getting what she deserves.