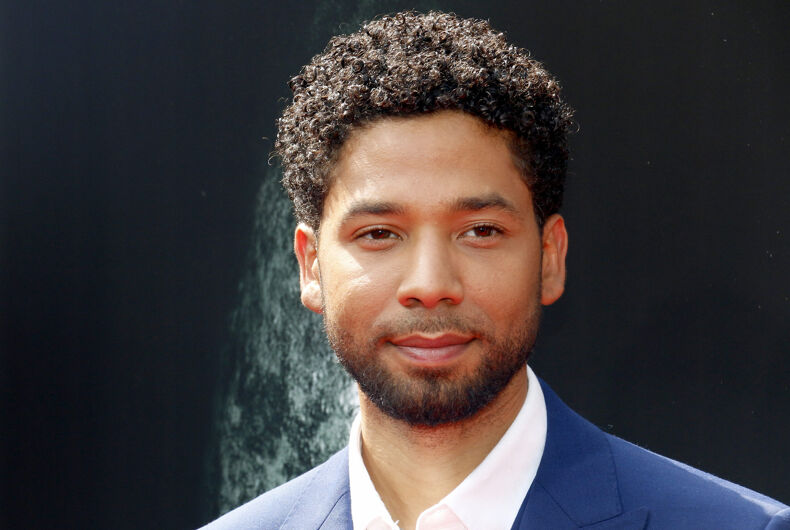 Out actor Jussie Smollett was released from jail yesterday pending an appeal of his conviction related to an alleged hate crime hoax.

Smollett, who starred as a gay singer in the show “Empire,” was sentenced to 150 days in jail on March 10 after being found guilty on five counts of disorderly conduct for allegedly lying to police about being the victim of a hate crime.

Related link: Will Don Lemon get fired for feeding Jussie Smollett inside information?

On January 29, 2019, Smollett reported to Chicago police that he was assaulted by two white men while walking to the store to buy eggs at 2 a.m. Smollett told police that the men poured bleach on him and put a noose around his neck while shouting, “This is MAGA country.”

But Smollett’s story started to unravel when two brothers said they had been paid to stage the attack. Abimbola and Olabinjo Osundairo, who were seen on security footage carrying the rope and bleach on the night of the attack, testified that Smollett paid them $3,500 to stage a hate crime. Smollett, who has maintained his innocence, said the money was for personal training services related to an upcoming music video.

Prosecutors argued that Smollett faked the racist and homophobic attack because threats against him were not being taken seriously by “Empire” producers.

“You’re just a charlatan, pretending to be a victim of a hate crime,” Cook County Circuit Judge James Linn said to Smollett during Thursday’s sentencing, adding that “there is nothing that I will do here today that can come close to the damage you’ve already done to your own life.”

During his week in jail, Smollett reportedly refused to eat and was placed in the jail’s psychiatric ward. Despite his insistence at sentencing that he was not suicidal, jail staff appeared concerned that he would hurt himself.

“Jussie is currently in a psych ward at the Cook County Jail,” brother Jocqui Smollett said in an Instagram video. “What’s very concerning is that there was a note attached to his paperwork today and put on the front of his jail cell saying that he’s at risk of self-harm.”

But Jocqui pushed back against that narrative.

“I want to just make it clear to folks that he is in no way, shape, or form at risk of self-harm,” he said. “And he wants to let folks know that he is very stable, he is very strong, he is very healthy, and ready to take on the challenge that ultimately has been put up against him.”

I’m a transgender journalist covering the war in Ukraine