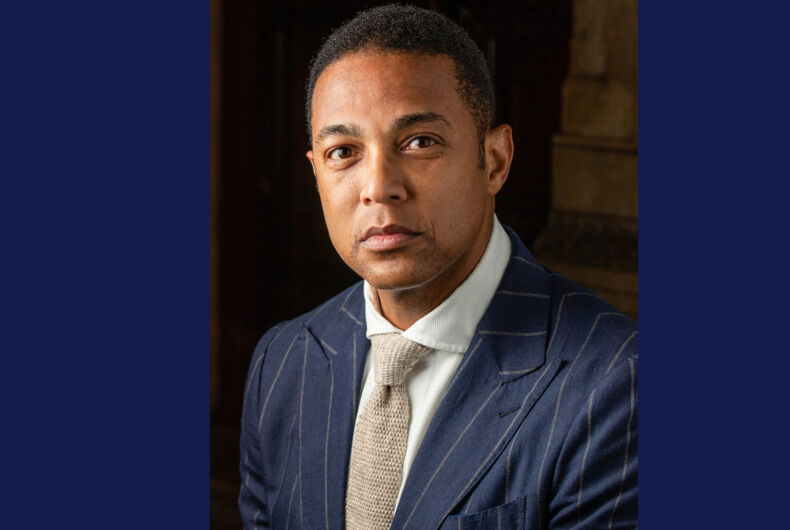 Out CNN journalist Don Lemon is under fire after out actor Jussie Smollett testified that Lemon tipped him off to the Chicago Police Department’s skepticism of Smollett’s hate crime allegations.

Smollett’s trial began at the end of November. Over two years ago the out actor claimed he was the victim of a racist and homophobic attack and was then accused of staging it himself.

Related: Matt Gaetz’s chilling prediction for 2022 should be a campaign ad for Democrats

The actor alleged that two men attacked him on January 29, 2019, pouring bleach on him and putting a noose around his neck while shouting, “This is MAGA country.”

The Osundairo brothers, friends and gym buddies of Smollett, were caught carrying the rope and bleach on a security camera the night of the attack.

The brothers later claimed that Smollett paid them to help stage the attack because he allegedly wanted a pay raise for his role in the Fox musical drama Empire.

When Lemon first began reporting the story, he admitted that he and Smollett knew each other and conversed regularly, Newsweek reported.

Now, however, Smollett has testified that he and Lemon were not only in contact, but that Lemon warned Smollett the police weren’t buying his story.

In the wake of this revelation, and the fact that Lemon never acknowledged this to viewers, outraged conservatives have accused Lemon of obstructing justice and are calling for him to be terminated from CNN.

If Don Lemon tipped off Jussie Smollett about police investigating the hate crime hoax, CNN should fire him immediately!

Nicholas Fondacero, the Deputy Managing Editor of conservative media watchdog, Media Research Center, expressed anger that Lemon did not acknowledge Smollett’s accusations during his coverage of the trial. He stressed that Smollett made the accusation “under oath” to stress that he believes Smollett is telling the truth.

At 10-to-midnight, @DonLemon and @OmarJimenez finally discuss the Jussie Smollett trial. But neither "journalist" mentioned how Smollett testified under oath that Lemon tipped him off to police skepticism of his hoax claims. The whole segment lasted 5 minutes and 7 seconds. pic.twitter.com/fNpgiY9o3J

Conservative writer Carmine Sabia tweeted, “Jussie Smollett has admitted that CNN anchor Don Lemon warned him that police were suspicious of his story. CNN does not have journalists. It has activists. Time for @DonLemon to follow @ChrisCuomo.”

Jussie Smollett has admitted that CNN anchor Don Lemon warned him that police were suspicious of his story. CNN does not have journalists. It has activists. Time for @DonLemon to follow @ChrisCuomo.

The controversy comes not even a week after CNN fired journalist Chris Cuomo for helping his brother, former New York Gov. Andrew Cuomo (D), after he was accused of sexual assault.

Despite the calls for Lemon to be fired, he posted a photo of himself on Instagram yesterday having a blast at Manhattan’s immersive Van Gogh exhibit.

Nevertheless, some commenters weren’t letting him forget what’s going on.

“All smiles right now, until you end up like Chris Cuomo,” one user wrote.

Adorable queer proposal stories that will melt your heart