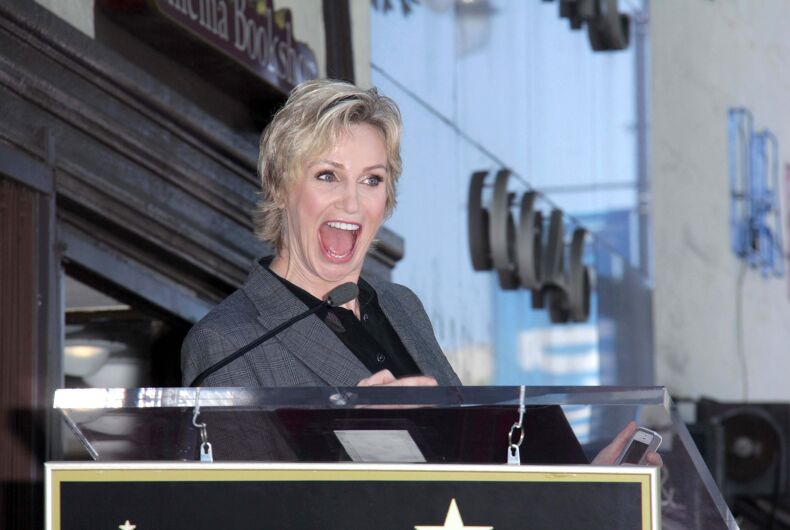 Actor Jane Lynch gets her official star on the Hollywood Walk of Fame in Hollywood, CA in 2013Photo: Shutterstock

Out actress Jane Lynch isn’t sure that the hit television show Glee could be made today.

Lynch, who played the foul-tempered and outrageous gym coach Sue Sylvester, said it would likely be deemed too offensive to make it on air.

“I think there would have been people out there who would have wanted to cancel Sue Sylvester,” Lynch said. “I don’t know that we could have done that show today, and it was only like … we started that 10 years ago.”

The character was known for bullying staff and students alike, using stereotypes, and insulting everyone.

The show went off the air a year before Trump was elected, but Lynch says she’s sure that the problematic PE teacher would have been a supporter. Lynch has previously said she based the character on far-right former Republican Congresswoman Michele Bachmann.

Writers are approaching their craft with more deliberation, she said, knowing that what they write now could be deemed inappropriate within a decade. And while being more thoughtful is always positive, sometimes it appears that people are looking for a reason to be offended.

“There’s kind of a rabid anonymous group of folks who can really change somebody’s life; they could take away their career,” Lynch continued.

“Some of it is about time – some of these people have got called on their stuff [from the past]. But I think we get carried away. This preoccupation with going ‘Aha!’, that’s a drag. Hopefully we’ll get over that soon. I was just thinking this morning about something that we did in Chicago called the Co-Ed Prison Sluts [it became one of Chicago’s longest-running fringe musicals]. It was not politically correct; it would not go over well today.”

But Glee was an important cultural touchstone for many LGBTQ people. Did the good outweigh the bad? Would the show have helped her to understand herself as part of the LGBTQ community easier?

“It would have been such a relief,” says Lynch. “If I had something like Glee, where it was stories that you could relate to on a deep level, that maybe as a person in high school you couldn’t express, yeah, I would have loved it. I don’t mean to overstate it, but I do think it might really have helped a lot of kids.”