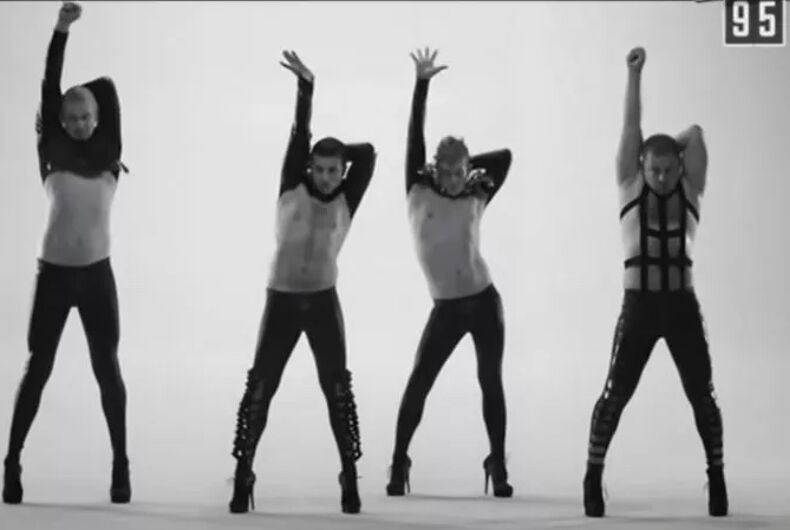 Back in 2003, Zelensky co-founded and performed in a comedy troupe called Kvartal 95 (Quarter 95). The group’s stated aim was to “make the world a better place, a kinder and more joyful place with help of … humor and creativity.”

The dance moves and costumes were likely inspired by the Ukrainian dance-pop group Kazaky. The group excited U.S. online viewers and European live audiences from 2010 to 2016 with their sharp Vogue-esque dance moves performed in high heels and skimpy outfits.

The Russian government wasn’t a big fan of the group’s moves and technopop stylings. The Russian Municipal Ministries of Culture called Kazaky immoral and “contrary to the core human values.”

Zelensky had a successful entertainment career before becoming president. He voiced the character of Paddington Bear in the Ukrainian version of the film and also participated in his country’s 2006 version of Dancing With The Stars — which he won.

Since Russia’s deadly invasion into Ukraine began, Zelensky has impressed the world with his courageous leadership.

When offered safe transport out of the country by the United States, Zelensky reportedly replied, “The fight is here. I need ammunition, not a ride.” He has since said he would rather die or be captured than abandon his fellow citizens.

Ukrainians have since rallied behind their charismatic leader, with citizens courageously blunting the Russian assault with homemade Molotov cocktails and rifles.

On Friday, Zelensky addressed anti-war protesters around Europe in a satellite broadcast asking everyone to fight for peace in his country.

“I want to urge you not to be silent,” he told the crowds in at least eight cities. “I want you to take to the streets and support Ukraine, support our efforts and struggle. Because if Ukraine does not get on its feet, then Europe will not get up either. If we fall, you fall too. So please don’t be silent…. You are all Ukrainians today.”