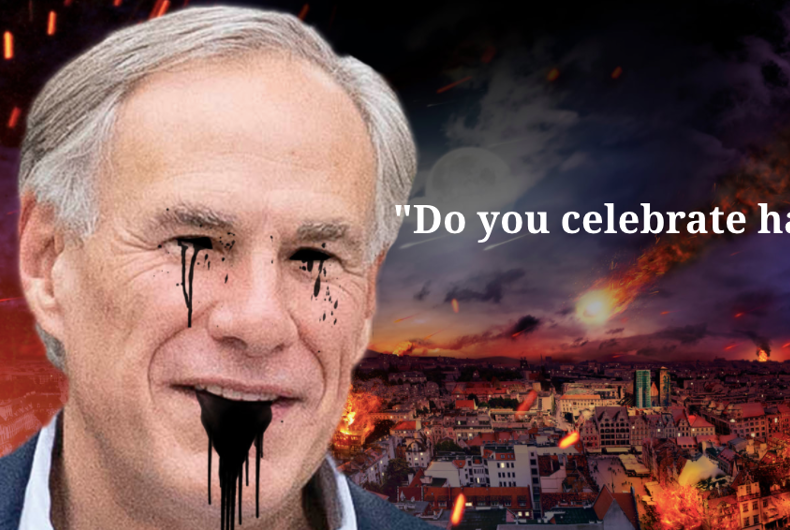 So Tingle snapped up GovernorAbbott.com and is using it to both mock the governor’s hate anti-trans policies and to connect people with supportive trans organizations.

“I’m Gorg Abbott, certified devil,” the website says, right below an image that shows Abbott, leaking blackness from his empty eyes as fiery comets rain down on a burning city behind him.

“Do you like saying you’re for small government then building a hate-based platform around exerting power over other people whose lives are none of your business? I do too!” the website continues.

Tingle’s website references Abbott’s recent order directing the state’s Department of Family and Protective Services (DFPS) to conduct “child abuse” investigations against parents who provide gender-affirming medical care to their trans kids. A judge recently put Abbott’s order on hold after a family under investigation accused him of violating their constitutional rights.

Under the site’s frequently asked questions (FAQ) section, it says, “What if I don’t hate people who are different than me?”

Its answer: “If you’re not frothing at the mouth with belligerent hatred and ignorant bigotry, then maybe supporting Gorg Abbott isn’t for you!”

The site then offers link to the Transgender Law Center, the Trans Lifeline and the Sylvia Rivera Law Project, a trans advocacy organization.

“I will say I was pretty dang surprised this website was available,” the author said in a recent interview.

“When I heard about the situation in Texas with Gorg Abbott it was a moment of shock and horror that I am sure we all felt,” he added. “I have seen devils do terrible things, being terrible is their bread and butter, but this is dang above and beyond. It is cruel in a way that feels designed to be cruel, with no other purpose but to hurt.”