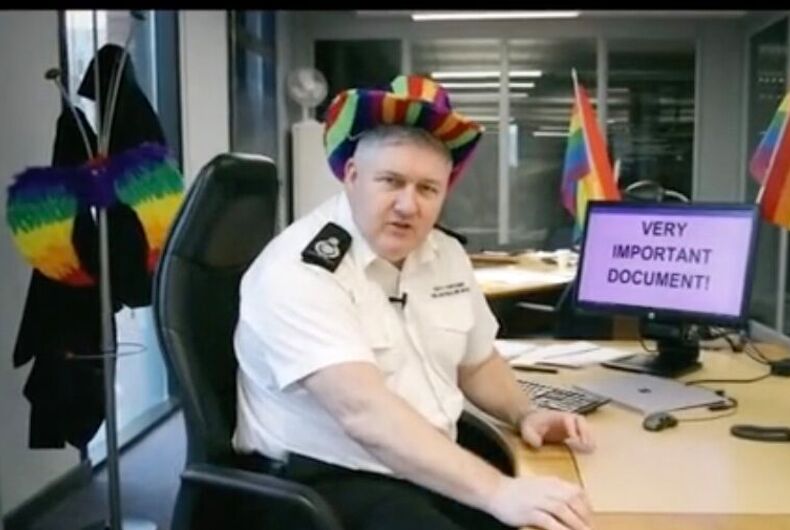 The firefighters of the U.K.’s South Yorkshire fire department have made it clear that they stand in solidarity with LGBTQ people — and that they have no time for anyone who doesn’t.

After posting a video on the department’s TikTok page to recognize LGBTQ history month in February, the firefighters posted a follow-up video addressing the negative comments they received in response.

Related: A troll attacked the Buttigieg family. Chasten made sure he got what he deserved.

With deadpan faces, the firefighters read some of the negative comments to the camera while draped in rainbows and pretending to slack off at work.

“Let’s see pictures of firefighters doing their job!” one firefighter says while rescuing a stuffed animal cat from a tree.

“And keep political correctness out of it!” adds another firefighter assisting in the stuffed animal rescue.

Another team member wears a rainbow cowboy hat and sits at a desk surrounded by Pride flags in front of a computer screen that says, “Very Important Document!” in all capital letters. “It’s just bullshit,” he says into the camera, though the final word is censored.

“More box ticking!” someone else says, while checking off an “LGBT+ Pride” box on a piece of paper where “Saving Lives,” “Fitting Smoke Alarms,” and “Visiting Schools,” have already been checked off.

The hilarious snippets go on.

But in between their snarky moments are serious messages from the department proclaiming its support of the LGBTQ community.

“We celebrate LGBT+ pride in solidarity with all those we serve and employ,” the video declares. “Fires don’t discriminate, neither do we.”