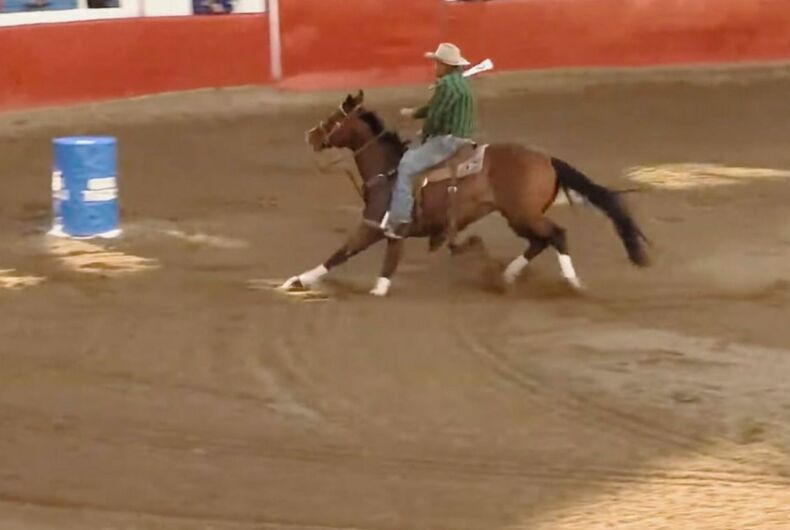 There are so many LGBTQ spaces out there. Beyond the bars and community centers we most often hear about, there are all kinds of unique ways LGBTQ people come together to celebrate shared passions and interests.

For some LGBTQ westerners, that means the gay rodeo.

Related: Americans’ support for LGBTQ rights is higher than ever

For decades, the gay rodeo has provided a safe space for LGBTQ cowhands to compete in events like bull riding, barrel racing, and calf roping as their true selves. It is a space participants describe as free from discrimination and filled with camaraderie.

Not many people know about the gay rodeo, though it has actually been around for decades. A recent episode of the PBS documentary series Subcultured chronicles its history, explaining that it began in the 1970s as a refuge for LGBTQ rodeo lovers and has a long established legacy of acceptance and charity.

“It’s such a fascinating space that seems to be really important to the people that are in it,” Subcultured host Josef Lorenzo told LGBTQ Nation. “I was just shocked that I couldn’t find many people that have heard of it.”

Prominently featured in the documentary is Cowboy Frank, who has been involved with the gay rodeo since 1996 as a photographer and website manager. Frank is the webmaster for the International Gay Rodeo Association and also has his own website chronicling the gay rodeo’s past and present.

The sense of community is what has kept him involved for so many years.

Unlike the straight rodeo, as he called it, Frank said the gay rodeo encourages a culture of supporting one another. Participants want to help one another succeed, he explained, even if they are competing against each other.

“A lot of the contestants we have and the members, a lot of the times they go to the rodeo just to meet the friends they have made over time.”

“It’s like Pride,” he added. “It’s a place to get together to be open about your sexuality.”

There is a lot that makes the gay rodeo special in addition to it being an LGBTQ safe space. For one, people of all genders can compete in every event. It has been that way since its inception, and it’s a departure from the traditional rodeo, where different events are designated as for men or for women.

“It’s just another example of how the gay rodeo is really inclusive for all people,” Lorenzo said. “Whether you’re gay or straight, a man or woman or trans, anyone can compete on equal footing.”

The gay rodeo also allows non-LGBTQ people to participate. “We don’t discriminate in any respect,” said Frank. He also said straight cowboys sometimes arrive a bit cocky to the gay rodeo, thinking they’ll easily win. But the gay rodeo is just as intense.

“They find out we’re using the same animals they are,” Frank jokes.

The gay rodeo also hosts its own unique events, such as the “Wild Drag Race,” which involves three participants, one of whom must be in drag. The person in drag is responsible for riding a steer (a type of bull) across the finish line.

The gay rodeo was founded in the mid 1970s by Phil Ragsdale. At that time, he struggled to find animals because ranchers didn’t want gay people touching their livestock. But Ragsdale persevered, and over 125 people showed up to that first event. Not only that, but Ragsdale held it as a charitable event, with the proceeds going to a thanksgiving dinner for senior citizens.

To this day, the International Gay Rodeo Association remains a nonprofit and requires gay rodeos to be held as such, according to Subcultured. This is not true of traditional rodeos.

Progress has certainly been made for LGBTQ people since Ragsdale first launched the gay rodeo, but Frank said homophobia is still a problem in the traditional rodeo community. As such, the gay rodeo remains a crucial safe haven for its participants.

“There’s still a lot of people in the straight rodeo that just can’t believe a gay person could possibly ride a horse,” he said, adding that “Most straight rodeos, especially the high-end straight rodeos, basically turn their head and pretend [we] don’t exist.”

Some LGBTQ people do participate in the traditional rodeo, Frank said, but they often keep their identity to themselves.

Above all else, the thing Frank most wants people to know about the gay rodeo is that it exists at all.

Participation is dwindling, he said, and while there are a number of explanations, one of them is simply that not enough people know about it.

One participant, Jade Fauver, who was featured in the documentary, is trying to spread the word to more young people. She spoke in the documentary about about why it’s so important to have a space like this, despite the progress LGBTQ people have made.

“So many people have worked so hard in order to give us what we have,” she said. “To me when I hear [someone questioning the need for it] it’s just like somebody saying, why do we need Pride? Because it’s who we are and it’s what other people have given us.”

“Everyone I spoke to said, ‘at least at the gay rodeo, I don’t feel like I have to look over my shoulder. I can be open about who I am.”‘

He added that the story of the gay rodeo is “a brilliant story of resilience,” as its members have endured their share of protests, hatred, and the like.

But they continue on, and the participants are so proud of the space they have built, a space Lorenzo described in the documentary as “just as tough, but a little bit more colorful.”

Ukrainian militias are fighting for democracy. American militias want to overthrow it.