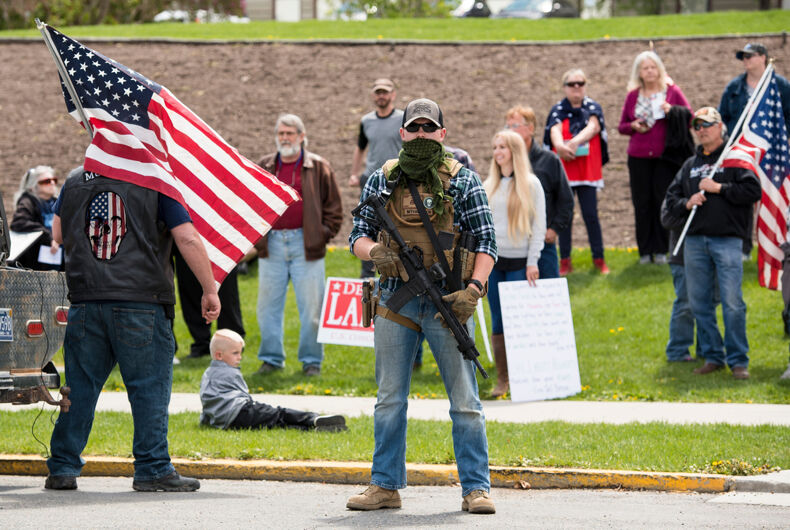 A Montana militia member stands with a gun near a child. The man was protesting coronavirus prevention measures outside the state Capitol building.Photo: Shutterstock

On the other hand, the United States is the most civilian armed nation in the world with a rate of 120.5 firearms per capita.

In Ukraine, the Ministry of Internal Affairs regulates everything related to firearms by Order №622 of the national government. Citizens are allowed to own non-fully automatic rifles and shotguns if they are stored properly unloaded in a locked safe when not in use.

Handguns are illegal except in specified cases: for target shooting, for those who hold concealed carry permits, and for some former military personnel when returning to civilian life. Concealed weapons permits are rarely given except after a proven threat to life has been shown.

A license is required for civilian firearms ownership, and license issuance is conditioned on whether a person:

Though firearms have been limited to the civilian population, throughout the horrific and illegal Russian invasion of their territory, the Ukrainian government has armed and trained massive numbers of brave patriots in the use of military-grade rifles and other weaponry to defend their beloved homeland and its population.

Along with the Ukrainian military, civilians who have had no previous training have become the vanguard in resisting and repelling one of the world’s most powerful combat units in the world.

In Ukraine, these citizen militias stand guard and protect government buildings, including city halls and legislative institutions. They stand firmly on the side of preserving their relatively newly won democracy and aligning with liberal democracies in Europe, the U.S., and other regions of the world.

In the United States, on the contrary, patriarchal Christian white supremacist paramilitary groups attack seats of government in their delusional resistance to what they define as a “deep state” tyrannical government bent on denying their “freedom” and “liberty.” These self-styled “patriots” have undertaken the project of eroding the very constitutionally guaranteed systems of democracy that have ensured their freedoms.

They scorn U.S.-style democracy while holding up autocrats around the world, for example, Orbán in Hungary and Putin in Russia, as exemplars to be admired for their “strength” and even “brilliance.”

While the United States symbolizes a beautiful nation founded on a noble concept, a vibrant idea, and a vital and enduring vision, as a country, it remains still a work in process progressing toward but not yet attaining and not yet reaching that concept, that idea, and that vision.

Rather than desiring to work toward “a more perfect union,” though, these right-wing militias strive for democratic erosion, a backsliding toward dystopic anarchy where might makes right, where those with the most powerful weaponry win by sheer force. They imagine a homogenous future where white Christians hold all authority and favor and non-Christians and people of color serve new masters, or they are deported to other lands.

These militias are stockpiling caches of armaments of the 400+ million firearms currently circulating throughout the United States. They have no desire or intent to protect and defend anything or anyone other than themselves and their conspiratorial cause. And many others not currently affiliated stand ready to enlist at a moments’ notice: the new “Minutemen” with their Culpeper flag emblazoned with a fierce rattlesnake at the center of “Liberty or Death, Don’t Tread on Me.”

The true patriots, those brave Ukrainian defenders of democracy in their homeland against real dangers to themselves and their loved ones, have demonstrated to the world that the love of a country does not mean standing alone against the world. Ukrainians have sought and received support from most other European nations, the United States, and countries in other and distant hemispheres.

The Ukrainian project has something to teach the world: about international interdependence, true love, and sacrifice, authentic leadership in difficult times, and helping those who have lost everything, including their homes and their loved ones.

Of course, Ukraine has problems like other countries by posing restraints against non-white residents and international students from attaining the benefits and privileges accorded to its white Christian citizens. The country must not be permitted admission to the European Union until they address issues of racial discrimination.

Ukraine, though, can teach nations, especially the United States, about safer ways to arm or disarm civilian populations, and if needed, to arm its citizenry in times of peril.

Gun violence on average takes 33,000 lives each year in the United States with 11,000 murders and another 22,000 accidents and suicides.

A Pew Research Center (2017) study found that the highest rates of gun ownership in the United States are among Republican white Protestant evangelical men. Men (39%) are significantly more likely to own guns than are women (22%).

In addition, people who live in rural areas own guns in higher proportions than residents of urban areas (46% and 19% respectively). Republicans and Republican-leaning independents are more than twice as probable to own firearms (44%) than are Democrats and people who lean Democratic (20%).

Across racial demographics, white people have the highest frequencies of gun ownership (36%), with Blacks at 24%, and Laxinx at 15%. Approximately two-thirds of gun owners report they own more than one gun, with 29% boasting ownership or five or more guns.

Regarding religious affiliation, white Evangelical Protestants own guns at the highest levels (44%) of any religious group compared with U.S. residents overall (30%). They responded (44%) that they are satisfied with current gun laws, which is significantly above the total of 30% of the U.S. population overall. Only 32% of white Evangelical Protestants call for stricter gun control measures versus the majority (52%) of the larger U.S. voting populace.

Like the essential rights of life, liberty, and the pursuit of happiness, many individuals, Christian or not, believe they have a divinely given right to own and carry as many firearms in all and any form they choose.

For them, unrestricted access to guns connect directly to their freedom to life, liberty, and their pursuit of happiness. They believe in the notion of ruthless individualism while society be damned. It doesn’t take a village to raise a child for them, but only a man and his wife alone and independent.

Resistance to social change is and always has been their credo. We have witnessed the same as we moved from a largely agrarian society to industrial technologies, and then into the digital information age. Societies often do not transition smoothly in an environment free of conflict and backlash. These pro-gun advocates subvert the concept of “freedom” by linking it to the relatively unlimited access to firearms.

If our nation, however, does not impose commonsense regulations on firearms ownership, life in the United States will become even more tenuous. And besides, where in the Christian testaments is it recorded that Jesus said: “Pack heavy and blow the SOBs away”?

Putin or any other dictator aiming at territorial expansion does not need to invade the United States. We are killing ourselves at alarming rates. When the dystopian anarchy arrives, Russia will have easy pickings of what remains.

Ever been to the gay rodeo?