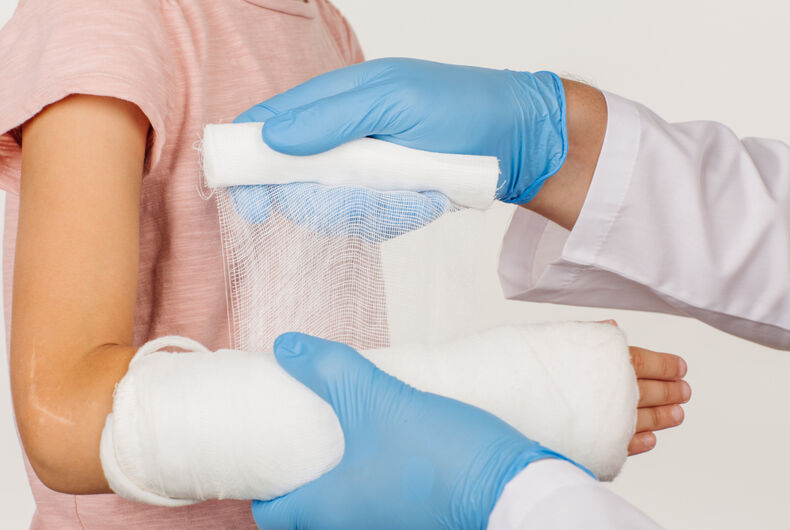 A South Dakota dad is speaking out about how his young transgender daughter felt forced to pretend that she had broken bones and other maladies so that she could use the nurse’s bathroom. She pretended to be sick so often that her friends thought she was dying, all because of the school’s discriminatory policy.

Mike Phelan said that his family has been engaged in trans equality activism ever since his daughter told her parents, “I have a girl’s heart,” when she was around four-years-old.

Related: Dwyane Wade’s daughter is transgender & he’s the best dad she could have

He was worried how she would be treated at school since she was living as a girl and said that the school made her use the single-person nurse’s bathroom instead of allowing her to use the girls’ room.

“In a sense, that sounds like a reasonable compromise, but it’s just another way of making a small handful of kids different,” Phelan told Xtra.

To keep the other kids from finding out why she had to use the nurse’s bathroom, the young girl did what she could to reduce bathroom visits at school, like avoiding drinking liquids. She would also pretend to be injured, so much that her friends thought she was dying.

“She would hold her left arm and her right hand – things like that – pretending it was broken so it looked reasonable that she was going to the nurse,” Phelan said.

“She wouldn’t drink very much at school throughout the day so that she wouldn’t have to use the bathroom, and then she’d be cranky and dehydrated when I picked her up.”

Phelan said that he spoke out against the policy and even got help from the local college’s LGBTQ organization. They were able to get the school board to change its transgender student restroom policy.

“The way that it hits us is that it is a ‘You don’t belong, we don’t want you here’ sort of message,” the supportive dad said. He explained that his daughter likes gymnastics and that she went to a gymnastics camp at their town’s high school where she saw pictures of the school’s girls’ teams on the walls.

“She looked up at the wall and said, ‘You know, I can’t wait till I get to be on the team just like those girls,’” Phelan said. “It is something that’s very much in her mind that she wants to do in the future, and I really hope that we can get this defeated through one mechanism or another, whether it’s a federal action or having to sue and overturn laws.”

Editor’s note: A previous version of this story incorrectly attributed several quotations to Pink News that, in reality, originated from an interview with Nico Lang at Xtra. We regret the error.

Hillary Clinton calls out Republican hypocrisy: “They’ll ban books but do nothing about guns”