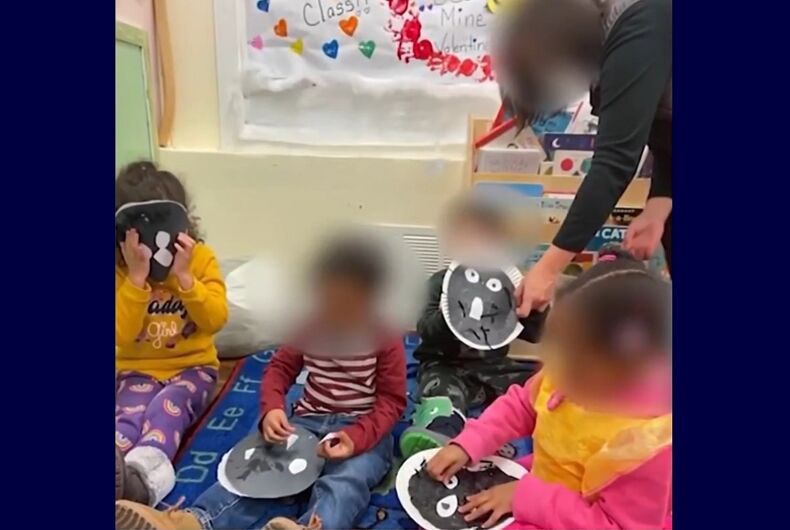 Toddlers were made to wear blackface masks at the school in Massachusetts. Photo: Screenshot

A daycare teacher in Massachusetts has been fired after she made young children wear blackface masks for Black History Month, and the daycare has temporarily shut down out of fear of protests.

IC Kids Montessori daycare in Newton posted an apology letter on its front door after it got attention on social media when a teacher had kids make blackface masks to learn about Black History Month on February 8.

One mother, Nadirah Pierce, picked up her children at the school and learned what happened. She complained, pulled her kids out of the school, and wrote about what happened on social media.

“This is unacceptable and don’t really understand the concept of this project,” Pierce told NBC 10 Boston.

IC Kids posted an apology on Facebook, but that apology drew criticism. The apology claimed that the school’s leaders were “hearing of protests happening at the center [that] will put the children and staff at risk,” so they closed the school for “safety concerns.”

The school also posted an apology on its door, which said, “To celebrate ‘black history month’, a teacher in toddler classroom at ICKids planned and carried out an activity that involved black masks ‘blackface.’ One of the parents brought it to our attention and was offended. The teacher apologized to the parent.” [sic]

The statement said that the teacher was “reprimanded” and admitted that the “wording of Facebook apology was not the best statement…so we apologize to every and anyone this may have offended.”

That statement said that the teacher who conducted the activity “has since been released from her employment at IC Kids.”

“The apology received was empty and then to go onto Facebook and see that apology was disheartening,” Pierce said. “I hope this is a lesson to possibly really prepare to do projects on cultures before doing them to avoid a hurtful gesture to a group of people.”

“Even if they weren’t trying to offend, they have.”

“Having children participate in an activity in which they draw Black faces is shameful,” said Simmons University dynamics of racism professor Johnnie Hamilton-Mason.

She explained that blackface “makes fun of [Black people], they’re not really human, they’re human, but they’re less than human” instead of celebrating their achievements and history, which is what Black History Month should be about.

NBC 10 Boston noted that there were not any protests outside the school this week.