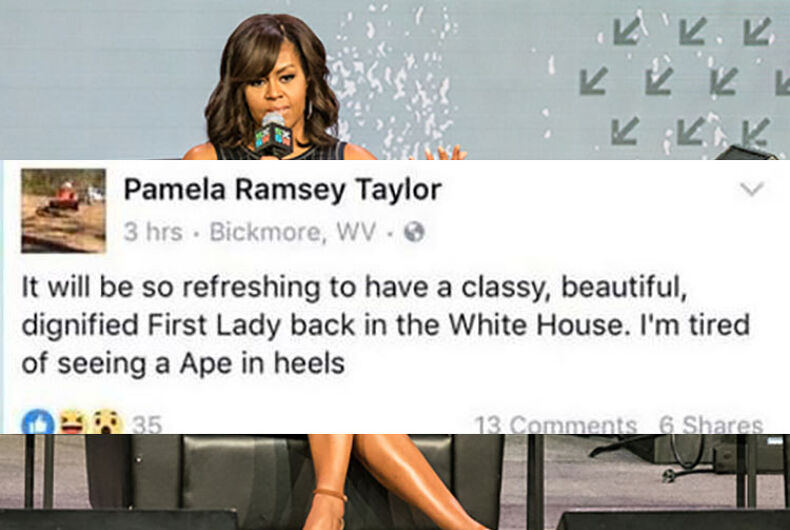 Heads are rolling in a tiny town in West Virginia, which likely hasn’t seen this much heat over race relations since it finally removed racist, unconstitutional language from its state constitution in 1994: “White and colored persons shall not be taught in the same school.”

Alas, racism appears alive and well in the little town of Clay, population of fewer than 500, which the Washington Post says is fighting for its reputation after an embarrassing Facebook post by the official of a government-funded nonprofit caused nationwide outrage.

Pamela Ramsey Taylor, until recently director of the Clay County Development Corp., posted this following the election of Donald Trump:

“It will be so refreshing to have a classy, beautiful, dignified First Lady back in the White House. I’m tired of seeing a Ape in heels.”

Taylor was placed on leave, according to the Associated Press, but a representative at the organization told the Washington Post that the board “removed” Taylor from her position. The nonprofit uses state and federal funds to provide services to elderly and low-income residents.

Then on Tuesday, Mayor Whaling resigned effective immediately, with three years left in her term.

It just so happened the town council had a meeting Tuesday night, at which officials and townsfolk expressed their shame, outrage and defended their reputation.

Joshua Shamblin, a former council member, told the Post “the county is sorry that this has been placed upon everyone instead of just the few who made hurtful remarks.” He said local officials were “shocked” by the incident but were preparing to push past it.

“Come see us,” council member Joyce Gibson said, according to the Associated Press. “Spend a day with us. If I knew you would come, I would bake a cake. We’re very decent people.”

Another council member, Jason Hubbard, publicly apologized to the first lady on behalf of Clay, according to the AP. But, Hubbard said, “please don’t judge the entire community for one or two individual acts.”

The ex-mayor sent a statement to the newspaper:

“My comment was not intended to be racist at all. I was referring to my day being made for change in the White House! I am truly sorry for any hard feeling this may have caused! Those who know me know that I’m not of any way racist! Again, I would like to apologize for this getting out of hand!”

Watch a report on the controversy from WSAZ-TV by clicking here, or watch CNN’s version of  the story via YouTube, below.

The Sorcerer on the Apprentice: A view from above

America’s Dad Tom Hanks wants you to know: ‘We are going to be all right’