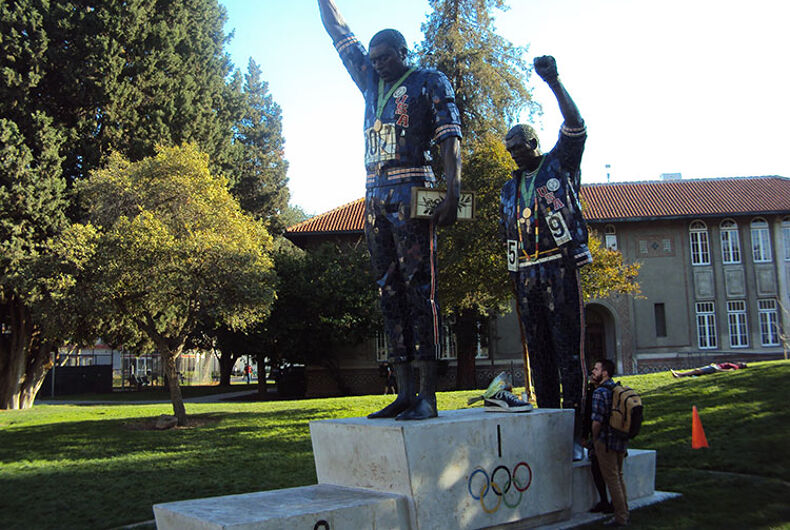 “Eternal vigilance is the price of liberty.” Thomas Jefferson

In the early hours of the morning directly following the recent election, I boarded a plane bound for California where I was to give a conference keynote address in San Francisco three days hence. I seized this opportunity to travel first to San José so I could wax nostalgic walking around my alma mater, San José State University (SJSU), where I earned my B.A. degree in 1969 and one year later, my Secondary Teaching Certification.

Shortly after taking off, images and sounds from a Walt Disney film from my youth screened in my mind. A novice sorcerer’s apprentice appeared engaging in his daily chores of filling two large wooden pails with water by submerging them in a small waterfall-supplied fountain. He then walked a short distance down to a standing pool where he deposited the contents of his labors.

During this process, he watched his mentor in his workshop weaving clouds in the air forming dark bats and brightly colored fragile butterflies. The sorcerer soon showed signs of fatigue, laid his magical pointed hat upon a table, and departed for sleep.

With a certain mischievous gleam in his eye, the apprentice placed the power-filled hat on his head, and placing his arms outstretched, weaved a spell over a broom resting in a corner. Suddenly coming alive, it marched under the apprentice’s control by commencing to transport water from fountain to pool. Back and forth walked the broom with its filled pails, until the apprentice fell fast asleep.

He dreamt of raising his hands toward celestial bodies calling on them to advance the tides ever higher as the engorging clouds cascaded their bounties onto the land. But as he suddenly awoke, the apprentice realized that his creation has taken charge. It had brought the room to flood stage by severely over filling the standing pool.

The apprentice, carrying a large ax, ran after the broom and slashed it into thousands of tiny splinters. This only increased the problem exponentially as each sliver awakened and quickly grew into a full-sized broom. Now thousands of pail-toting brooms continued the chore of transporting more and more water ever adding to the flood tide and washing away everything from the space in torrents of destruction.

Finally, the sorcerer awakened and returned to restore order and tranquility from chaos and devastation. As the novice, head down-turned, attempted to slink away, the sorcerer swatted him with a broom.

Soon after departing the plane, I strolled around my former university campus. I was in awe, but certainly not surprised, that so much had changed over the many years since I last walked these pathways and entered these now renovated buildings.

As I entered the space surrounding the new Campus Center, a group of students engaged in an open-mic rally voicing their feelings and thoughts on the election results. Some showed tears running from their eyes. Some voiced anger, even rage. Some expressed fear and pessimism over the future direction of our country.

At the end of the rally, I approached the rally organizer to give praise for providing students an occasion publicly to process their feelings. I informed her that as an alumnus of the university from the 1960s, what is happening in this country today in some key ways mirrors the reactionary past.

When I attend SJSU, police and the FBI routinely invaded the spaces and shot members of the Oakland Black Panther Party and other black and brown people, and our government engaged in an illegal war in Vietnam, which divided our nation.

I told her that I served as an anti-war activist, joined the Students for a Democratic Society (SDS), and was one of the original members of the first student group advocating for the rights of gay and lesbian people, the Gay Liberation Front.

Since same-sex sexuality was still illegal throughout the country, including California, at the time, then Governor Ronald Reagan and his Chancellor of the California State University (then College) system, Glen Dumke, forbad us from using campus facilities for our meetings. We met, instead, afterhours at a local diner for support and political organizing.

“Oh my God,” she shouted. “I have to talk with you about the history you experienced. I am the co-chair of the current LGBT campus organization. It’s so great meeting you.”

She relayed to me her great concerns and fears over the election. As a Latina lesbian, she dreads what a Trump presidency might hold for her and for all the other groups of people Trump has attacked, stereotyped, and scapegoated during his campaign.

My new friend, this student organizer, told me about a rally that was to take place later that evening at the Smith-Carlos statue on our campus. “Tommy Smith and John Carlos were my classmates when I was a student here,” I inform the student. “Though I did not know them well, I met them on a few occasions, especially when they returned triumphant from the 1968 Mexico Olympics.”