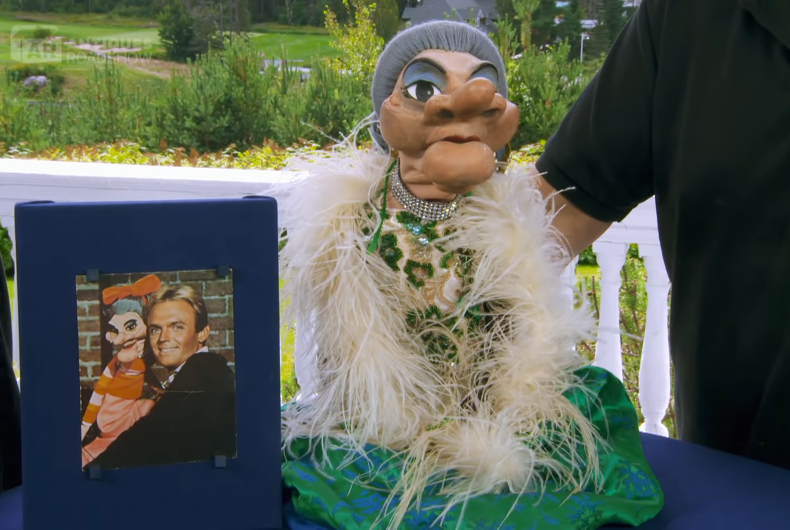 Madame returns to television in an episode of Antiques RoadshowPhoto: Screenshot

Gay ventriloquist Wayland Flowers brought his iconic puppet, Madame, to life throughout the ’70s and ’80s. Flowers died from cancer in 1988, but Madame, a geriatric hussy, continues to live on.

And when she made an appearance on Antiques Roadshow, the foul-mouthed puppet proved she’s still got it.

When Dave brought in one of the original Madame puppets, the antique expert gave him an eyebrow-raising estimate that would normally be the highlight of the segment. But the man’s story behind how he became the owner might be even better.

Dave said when Flowers was first starting out, a friend of his named Dana who knew Flowers threw him a surprise birthday. Flowers then gave Dana the puppet. Dave always admired Dana’s Madame, and eventually, Dana gave it to him.

Dave also pointed out to the expert that Flowers wasn’t really a ventriloquist. He stood beside Madame and moved his mouth, but camera angles and talent made the audience forget that he was the one speaking for her.

“I’m an illusionist,” Flowers insisted before he died. “I’m right out there on stage beside Madame, but within two or three minutes it seems that I disappear.”

Or as Madame herself put it, “Wayland is no ventriloquist and I’m no fucking dummy.”

Flowers’s show included plenty of innuendo on television, whether Madame was part of Hollywood Squares or her own sitcom, Madame’s Place. When the cameras were off, the shows became downright explicit and the audience loved the puppet even more.

But when Dave quips about Madame’s entrance into the waiting room, it proved that Flowers might have been an illusionist, but the vulgar old puppet is still a star.

Dating an asexual person 101: How to ace it