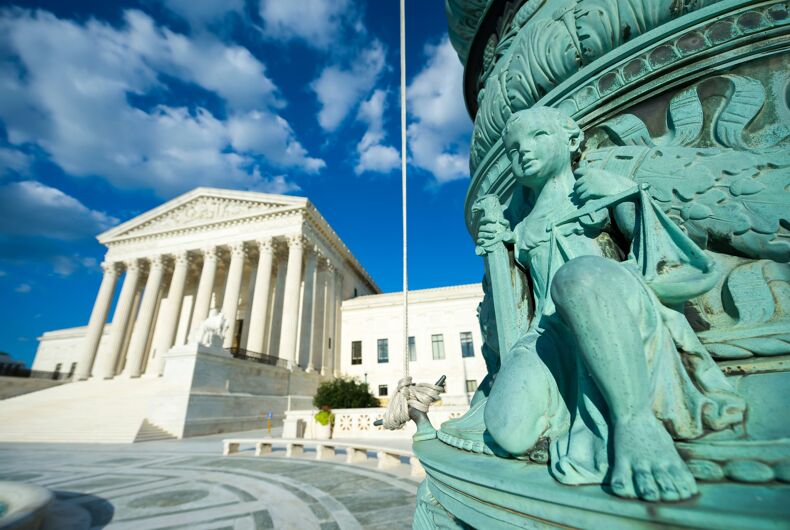 As the Supreme Court inches closer to overturning nearly five decades of precedent to overturn Roe v. Wade, there’s a lot of speculation about which states will simply ban abortion outright. According to the Guttmacher Institute, 26 states would definitely or be likely to make abortion illegal given the chance. Only 15 states have laws that protect a woman’s right to choose.

The case at hand is a Mississippi law that bans abortions after 15 weeks of gestation, a violation of Roe v. Wade. The Supreme Court heard oral arguments in the case in December. The only question remaining seems to be how big will the conservative majority go with their decision. Will they entirely overturn Roe or will they just erode it even more? The betting among pundits is on the former.

While the immediate focus is on abortion, the Court’s decision in that particular case will have ramifications for a lot of other rights, most notably marriage equality. Justice Sotomayor said as much during the oral arguments. The basis of Roe is an individual’s right to privacy. Overturning that ruling opens up other decisions to similar attacks.

“We have recognized that sense of privacy in people’s choices about whether to use contraception or not,” Sotomayor said. “We’ve recognized it in their right to choose who they’re going to marry.”

Moreover, it’s not as if the right–or even other Supreme Court justices–have made any attempt to hide their wish to overturn Obergefell v Hodges, the ruling that made marriage equality a national right. The architect behind Texas’ restrictive abortion law has urged the Court to throw out Obergefell.

More importantly, so have two Supreme Court justices: Samuel Alito and Clarence Thomas. Alito and Thomas have made it abundantly clear that they think Obergefell was wrongly decided. In a 2020 decision involving Kim Davis, the Kentucky clerk who refused to give same-sex couples a marriage license, Thomas said so, point-blank.

“By choosing to privilege a novel constitutional right over the religious liberty interests explicitly protected in the First Amendment, and by doing so undemocratically, the Court has created a problem that only it can fix,” wrote Thomas in an opinion joined by Alito. “Until then, Obergefell will continue to have ‘ruinous consequences for religious liberty.’”

If the Court were to strike down Obergefell, marriage equality may be a matter left up to individual states–like abortion. In that case, the right to marry would depend upon who controls the state legislature.

In short, the map of where abortion would be banned would probably have a lot of overlap with where marriage equality would be banned. Large swaths of the south and midwest would gleefully pull the rug out from same-sex couples to score points in the culture war.

Even states that wouldn’t immediately leap to mind as hostile to LGBTQ rights might be willing to join in if Republican legislators are hungry enough to cater to its far-right flank. Ohio, New Hampshire, and Arizona are states where the GOP controls both the state legislature and the governorship. There would be nothing to stop those states from steamrolling a bill through if Republicans so wish.

Now, there are plenty of caveats for this scenario. For one thing, the Court hasn’t taken on a case that would allow it to revisit Obergefell. For another, there may be more resistance to overturning marriage equality, as it enjoys strong support in polls. By contrast, Americans are more ambivalent about a woman’s right to choose.

But that might not matter to Republicans seeking to turn back the clock. It certainly doesn’t matter to the conservative wing of the Supreme Court. They have their own agenda mapped out.

One thing’s for certain: it sure isn’t ours.