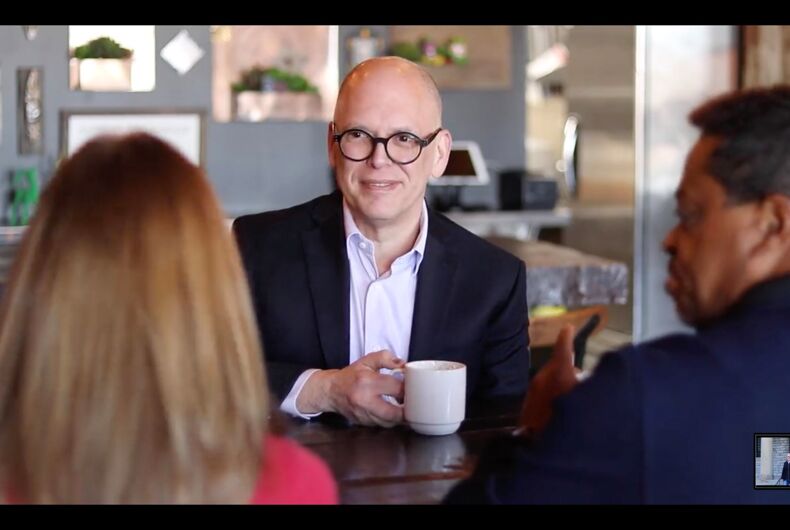 In January, Jim Obergefell (D) – the lead plaintiff in the landmark 2015 Supreme Court case of Obergefell v. Hodges that legalized marriage equality  –  announced he is running for state representative in Ohio’s 89th district.

Since winning marriage equality for all Americans, Obergefell has dedicated his life to advocacy. Throughout his work with a variety of causes, running for office has always been on his mind. When he moved back to his Ohio hometown in June, a place to which he feels deeply connected, he knew it was time.

Related: Ashanti Martinez wants to be the gay Afro-Latino voice his community needs

“I realized this is my chance to continue my activism,” he said, “to continue fighting for families…[It’s] a way for me to continue to be involved, to help make the world a better place.”

I’m Jim Obergefell, and you have my promise that I will work hard every day to improve the lives of everyone in Ottawa and Erie counties and all of Ohio. To watch the full video and learn more about my campaign visit my website here: https://t.co/Er6NXVvQE0 pic.twitter.com/b6Jeguz6lg

In addition to fighting for LGBTQ rights, Obergefell plans to prioritize increasing access to jobs and opportunities in his district as well as in the state overall. Growing up in Sandusky, where he now lives again, he remembers the pain experienced by loved ones – including his own father – when factories closed and jobs were lost. He hopes to focus on increasing job access in the area so people aren’t forced to move to make a good living.

“So many of the challenges we face in our communities comes down to the fact that people don’t have well paying jobs that allow them to care for their families, to put food on the table, to care for someone when they get sick,” he said.

A former public high school teacher, Obergefell is also passionate about equitable education funding. In 1997, he explained, the method Ohio used to fund its schools was found unconstitutional, but the process somehow has yet to be fixed. As such, many schools are suffering.

“We rely on it for drinking water, for recreation, for tourism, for industry…so keeping Lake Erie safe, healthy, and clean is vital.”

Signatures gathered and petitions filed, now the wait for word that I submitted 50 valid signatures. I’m excited to run for the Ohio House of Representatives! pic.twitter.com/eSRx3VT5B2

Obergefell learned many lessons from his years of activism that he believes will serve him well at the statehouse.

“You never know where you’re going to find partners, people who believe in the things you do, who are on your side even though it might feel like they’re not,” he said.

After Obergefell v. Hodges, he said no one would have thought he and the named defendant, Rick Hodges, then-Director of the Ohio Department of Health, would have come together.

“But we’re friends,” Obergefell said. “We’ve done events together, we’ve spoken together. I look at this as proof you can find good people and allies for the things that matter to you in the most unlikely places.”

His experience with the Supreme Court also taught him how important personal stories can be to advancing a cause.

“Using stories and bringing people together to hear stories, to understand things on a personal basis, one-to-one with the people who are impacted by laws and policies, those are the things that can make a huge difference.”

Obergefell is currently running his campaign without knowing exactly what his district will look like. The Ohio Redistricting Commission has released 2 maps, but both have been found unconstitutional by the Ohio Supreme Court for favoring Republicans.

While he said campaigning this way is “a little unnerving,” he also emphasized that he is ready to represent the people of his district, no matter what that final border looks like.

Obergefell is passionate about district 89. It’s home, he says, where all five of his siblings live and where he has friends he’s known since he was three years old.

He declared he will fight for his hometown with the same vigor he fought for marriage equality.

“I just don’t give up. It doesn’t matter how daunting it is going to be. The Supreme Court, I think a lot of people would have looked at that and said, ‘nope that’s just too overwhelming, too scary, I can’t do that.’ Well, it was the right thing to do and that’s how I will approach being a representative. I’ll do the right thing. I’ll do what’s in the best interest of the people of the district and of Ohio.”