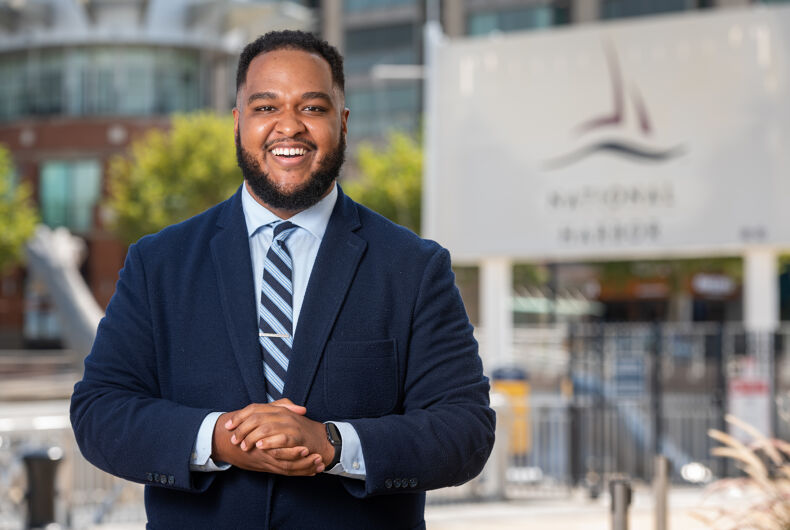 Out progressive Democrat Ashanti Martinez is running for the Maryland House of Delegates because of the devastating effects he has watched COVID-19 bring on his community.

“Unfortunately in Maryland, when you fall you fail, and I think that’s unacceptable,” he told LGBTQ Nation.

Related: Chantale Wong is the first out lesbian ambassador to be confirmed by the Senate

“Our working families deserve someone in Annapolis that’s going to champion the issues and help build out a safety net…so they know there’s programs and systems in place within our state that will help them and their families thrive.”

As your Delegate I will be a voice for those who’ve gone unheard for far too long.

I will tackle economic and housing inequality, fight for our students and educators, push for green policies, and deliver for our district.

Martinez would be the first out LGBTQ person from District 22 ever elected to the Maryland legislature. He was born and raised in his district, and he maintains a deep love for the community he has always called home.

“I absolutely love every inch and every ounce of who we are…We have so much history and culture,” he said.

He has an especially strong appreciation for his district’s diversity.

“There’s so much talent, but we often are hindered by the obstacles society presents. I see my role as delegate as breaking down those hurdles and to really help our communities thrive.”

For Martinez, that means constituent services. It means being there for any community member who needs help.

“Constituent services is one of the number one things that a representative democracy is to do,” he said, “and I want to make sure our residents are serviced properly here.”

And he has a lot of experience doing just that. As the current research and policy analyst for CASA, the Mid-Atlantic region’s largest grassroots immigrant advocacy organization, Martinez represents those in need before both the Prince George’s and Montgomery County councils.

“I get to fight every day for people that are oftentimes made to be invisible. Being able to be in the rooms, be in the halls of power and elevate the voices of some of the most marginalized is such an honor and a blessing.”

In that role, he recalled one particularly meaningful situation in which he helped a senior woman who had lost her job and was sleeping in her car find stable, affordable housing.

“I was able to pull in nonprofit partners and some governmental agencies to not only get her assistance in moving and a new place to live…but also to pay for a storage facility. In that position, I was able to use a lot of the relationships I had built to service the residents of our district.”

That’s exactly what he wants to do as a delegate, he said.

“I want to take the relationships [I’ve built], whether it be from agencies or nonprofits, whether that be state, county, or municipal level agencies, and really be able to service our community directly.”

Serving his community as an out Afro-Latino man would also mean a lot, he said.

“Those experiences of growing up in this district and understanding what life is like for a member of our community is really important when we’re crafting policies,” he said.

“Marriage equality is not the only issue impacting LGBTQ people. We suffer from lack of access to health care, we are underemployed, we have issues with accessing education, making sure we have equitable housing…I want to make sure our voices are at the decision-making table.”

Among Martinez’s priorities are expanding health care access and stabilizing housing costs, as well as “transportation, education, and economic development all tied together.”

He mentioned an upcoming light rail project called the Purple Line that will bring more transportation to his district as an example of the kind of opportunities his community needs more of.

Today is #TransitEquityDay! Transit equity is a civil right. Maryland will achieve transit equity when we use policy to do the following:

“I want to make sure all of the opportunities on the horizon, the community members that have historically been here get to benefit.”

He wants to be part of making Maryland a “model for the nation” when it comes to paid sick leave, living wages, closing corporate tax loopholes, and equitable distribution of resources.

Above all else, Martinez wants voters to know that he is there to be a voice for them.

“I pride myself on being able to listen and learn and take what their experiences are and be able to advocate for them.”

Dolly Parton’s Dollywood will pay for college for all 11,000 of its employees

The magic of the One Great Food